Advertisement
On Holy Thursday Father Alejandro Béjar, a priest of the Archdiocese of Mendoza, narrowly escaped being killed by a train. He attributes his survival to consecrated Hosts he was transporting on his way to visit the sick.
The April 13 incident took place at a railroad crossing in San Roque as Fr. Béjar was on his way to visit several sick persons, in addition to saying three Masses in the communities under his care.

Fr. Béjar, 50, told CNA that he crossed the railroad tracks that day for lack of a signal and got trapped. He explained he did not see the rails because of some bushes, and that there was no railroad crossing barrier.
Trapped on the tracks he could hear the train’s horn, and saw the train appear, coming around a curve.
Within seconds, he tried moving his car. He was unable to, so he quickly unfastened his seat belt and ran from the car.
His Ford Escort was struck, and dragged some 80 feet by the train, which was unable to brake in time. The vehicle was destroyed but the priest could not get over his astonishment that the bag holding the consecrated Hosts on the front passenger seat was undamaged and remained in place.
“That’s strange because in the back of the car there was a bag of fine flour I was taking for the community where I was going to celebrate Mass. That bag opened up and (the flour) spread all over, but the bag (with the Hosts) didn’t even move,” he said.

Fr. Béjar said he was ashamed he did not take with him the consecrated Hosts when he abandoned the vehicle, but he thanked God for saving him from the onslaught of the train.
“I thank God because I was calm and didn’t despair. It was a sign from God that he was present at that moment and helped me have those reflexes to stay calm and not give up hope,” he said.
The priest was unable to get the first Mass on his schedule for that day.
Fr. Béjar noted that eight years ago two women died in similar circumstances, and so he hopes the authorities will clean up the area from bushes and put up appropriate railroad crossing signage. 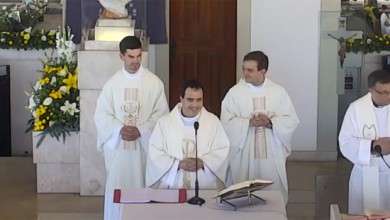