Pope Francis pressed his call for Christians to forge greater unity, urging Sweden’s tiny Catholic community on Tuesday to set aside divisions with Lutherans as the two Churches commemorate the 500th anniversary of the Protestant Reformation.
Francis celebrated Mass in the Malmo sports stadium, packed with Nordic Catholics as well as immigrants from the Philippines and beyond for the final event of his overnight trip to southern Sweden.
“Blessed are those who pray and work for full communion between Christians,” the Pope said in his homily.
On Monday, Francis and the heads of the Lutheran World Federation commemorated Martin Luther’s revolt against the abuses of the Catholic Church, praying together for forgiveness at Lund’s cathedral. They signed a joint declaration pledging to put the errors of the past behind them and pursue theological talks with the goal of letting Lutherans and Catholics share in the Eucharist.
In his homily on Tuesday, Pope Francis continued with the theme of unity, urging the faithful to meekly draw close to Christ and one another as they commemorate the Reformation over the next year.
Meekness, he said, “enables us to set aside everything that divides and estranges us, and to find ever new ways to advance along the path of unity.”
The Protestant Reformation started in 1517 after Luther nailed 95 theses on the church door in the town of Wittenberg, Germany, denouncing what he saw as the abuses of the Catholic Church, especially the sale of indulgences.
As Protestantism spread, religious wars erupted, dividing western Christianity in a schism that resulted in hundreds of years of violence, persecution and discrimination.
As a result, the Pope’s visit to Sweden to start the year-long Protestant anniversary raised eyebrows. But the Vatican and Lutheran church both insisted the event was no celebration but rather a solemn commemoration to ask forgiveness for the division and rejoice that relations have improved. 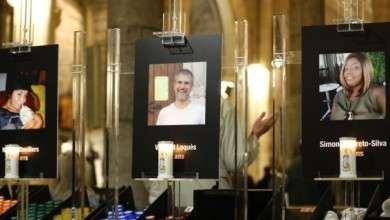