An email from an Anglican gave me pause for thought

About six years ago I wrote an article entitled, Why do Catholics become Anglicans?. It recently drew this response from a Canadian reader, sent by email, which I think is interesting, and which I pass on with permission:
“I have recently come across your story that you wrote several years ago about why Catholics become Anglicans. Some of the reasons you listed apply to me. I was brought up Roman but switched over the Anglican Church when I was 19. I have been away from the Catholic Church for over 20 years and was seeking to reconnect with my roots and even go back to Rome.
“Since the end of 2016 to present, I have visited several parishes near my home and found that the cultural differences in parish life between the two traditions are just so different. Perhaps I have been so inculturated by Protestant congregational parish life that I am just a fish out of water in Rome.
“Upon visiting all those Roman parishes I noticed the following:
1. No one says hello
2. No one sings the hymns
3. Lack of reverence in the Eucharistic celebration
4. Homilies are often boring and trite
5. Priests are aloof
6. People are just taking their Communion and exiting before Mass has ended
“When I brought this up with the director of the Newman Centre at the University of Toronto, she gave me the typical answer that Catholics attend church for the sacrifice of the mass; in addition, I noticed that Roman Catholics do not like any sort of criticism. I don’t know what parish life is like in England, but in Canada or USA it is non-existent. Catholics have a culture of obligation and it shows in their apathy (ie. non-participation and low rates of donation).
“Granted the Anglican and other Protestant churches I have been a part of are much smaller, but they are also strong and welcoming communities. I love to sing my heart out to God in the hymns and sacrificially give. My goal is to be able to give the equivalent of a fortnight’s worth of wages as my annual tithe to my church this year. I have come close, but still need to work on it.
“Your article reminded me of my reasons for leaving and why I will not go back to Rome…. I think a lot of the issues in Catholic parish life have to do with the lack of priests. My local Roman Catholic parishes are centres that have 4-7 masses on a Sunday and they are all packed. I would estimate 4000 plus people attend, but yet there are only 2-3 priests that staff the places.
“They have no time to develop any pastoral relationships with anyone, because they are busy with just saying mass. I read a story in the Catholic Herald about a RC priest of a village church in the English midlands. He has a vibrant parish of 100 plus on Sundays, various apostolates and other community groups that meet there. He went on to say that people sing and the parish is financially viable, but he is afraid that his parish may be closed and merged with another due to priest shortage. If this were a Church of England parish, it would be free to operate and there would be no threat of closure.”
Our Canadian friend says nothing that can be faulted from the point of view of fact, and his email makes sad reading for Catholics. He is right about the way priests’ make use of their time. Obviously they must celebrate Mass and the other sacraments, but they also need to be available to provide pastoral care. This means in practical terms that they must mingle with the people, and be available for appointments for those who want to speak in private, and that they should not have to rush off after every Mass. Moreover, in the week, they need to be present in schools, hospitals, nursing homes and people’s homes, as well as walk the streets of their local town or village.
The funny thing is that this is what most priests would love to do, if only they were not harassed with various meetings most of which concern things for which their training may not have equipped them, such as finances, health and safety, building maintenance, school governorship and other such matters. Years ago, when I was first ordained, I was told all these things could or would be safely delegated to the laity, but, while there are many laity who have collaborated with their priests in these matters, ultimate responsibility always seems to come down to the parish priest, which is both time consuming and stress-inducing. Much parish management could be delegated to deacons, but of course many of our deacons have day jobs. Paid help would be a good thing, but most of our parishes cannot afford that.
My Canadian correspondent says that Catholics don’t like criticism. Well, he is right about that. But getting defensive about these matters will not help. As we have fewer and fewer clergy we need to look at how to make our parishes more welcoming places. For that, listening to criticism, and some self-criticism, is necessary. 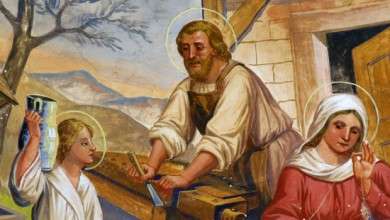 Cardinal George explains how gay marriage is like Sharia Law