I know that we are not to treat animals cruelly and that we are allowed to kill an animal in self-defense, but is it okay to hunt animals for sport?\

Catholic Church’s Teaching on the use of animals

God gave man stewardship of animals, including the right to use them for just purposes (for his benefit). The Catechism of the Catholic Church mentions food, clothing, medical and scientific experimentation, work, and leisure of man as just purposes (CCC 2417–8).

Humans must not intentionally cause animals to suffer and die needlessly since doing so would be contrary to their dignity. Since animals are not humans, they do not have “rights.” However, man has a responsibility to treat them humanely.

Hunting for sport and Cruelty

Is it okay to hunt animals for sport? Or is sport hunting excluded from this? Yes, if a hunter were to shoot an animal for the sole purpose of watching it suffer and die. However, most hunters don’t do that. They use the meat and skin of the animals. In order to thin out animal overpopulation, others rely on carefully regulated licensing procedures. Some hunt for sport, but the sport is in tracking, gun skills, and trophy hunting, not in causing suffering and death to animals.

The National Humane Education Society might have another view. According to a survey by the U.S. Fish and Wildlife Service, approximately 15% of the U.S. population is a hunter. Hunting animals for sport is cruel. Hunting disrupts migration and hibernation patterns, decimates animal family units, and degrades habitats.

All responsible hunters take care not to leave a wounded animal injured by a badly aimed shot to suffer; they make sure to track it down and end its suffering.

In summary, the Church does not oppose sports hunting.

Can grandparents be godparents for their grandchild? 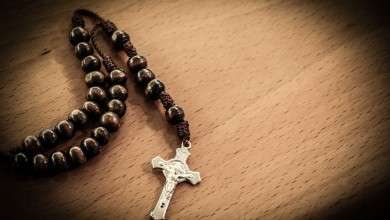 When is it superstitious or wrong to carry a Rosary?