Fursey (died 648) was an Irish monk who helped to advance Christianity in both East Anglia and northern France. Precisely where and when Fursey was born is unknown. According to a seventh-century life, he established a monastery at Louth, some 35 miles north of Dublin.

The Venerable Bede records that Fursey experienced a vision, in which angels carried him out of his body to a great height. Looking down into a gloomy valley, he saw four fires. The first, an angel explained, was Falsehood; the next Covetousness; the third Discord, and the last Injustice. Gradually these fires drew together into one mighty conflagration.

Fursey became alarmed. The angel, though, reassured him: “It will not burn you because you did not kindle it; for although it appears as a great and terrible fire, it tests everyone according to his desert, and will burn away sinful desires.” Fursey did not entirely escape, for one of the demons who tortured fallen spirits in the flames thrust a victim against him, causing him to be burnt on his (presumably ghostly) shoulder and jaw.

Fursey recognized the man and remembered that he had appropriated some of his clothes after he died. Restored once more to his body, he found that he had a permanent scar on his shoulder and jaw.

Bede heard this story from a monk who had met Fursey. His informant recalled that, although it was a bitterly cold day when he saw the saint, who was but thinly clad, the holy man was sweating profusely – “either”, as Bede suavely observes, “because of the consolation or the terror of his recollections”.

Around 637 Fursey crossed the Irish Sea to begin his life as a missionary. His first field of endeavor was in East Anglia. There, King Sigbert wanted to restore Christianity after the depredations of the pagan Redwald.

Inspired by another vision, Fursey built a monastery on some land given him by Sigbert at Cnobheresburg (Burgh Castle in Suffolk). Soon, though, he turned over the administration of the monastery to his brother Fullan and went to live with another brother, Ultan, who had become a hermit.

After he had spent some 10 years in East Anglia the kingdom was attacked by the paganissimus Penda of Mercia. Fursey fled across the Channel, where he was welcomed by the Frankish King Clovis II.

The King’s wife Balthild was an Anglo-Saxon aristocrat who had been sold into slavery in Gaul. Whether or not through this contact, Fursey was able to found another monastery at Lagnac, near Paris on the River Marne, before dying on a journey in 649.

Disputes over where he should be buried testified to the high regard in which he was held. Finally, he was laid to rest in Péronne, where his cult continued to grow. 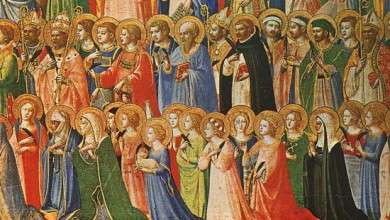 7 “All Saints” days celebrated in November

Those 29 Times U.S Presidents and Popes have Intersected