Mother Marie Adele Garnier, the foundress of the Tyburn Nuns, wrote of the Eucharistic miracle in a letter to a friend

A London nun who saw the Eucharist turn to bloody flesh in the hands of a priest is to be put on the road to sainthood by Pope Francis.
The Vatican has agreed to open the Cause for the canonisation of Mother Marie Adele Garnier, the foundress of the Tyburn Nuns.
Mother Garnier, who died in Tyburn Convent, near Marble Arch, London, in 1924, has been given the title “Servant of God” after the Congregation for the Cause of Saints concluded that there were “no obstacles” to her candidacy.
The development is likely to be formally announced in a declaration from the Vatican later in the year.
The Vatican had been petitioned to open the Cause by Bishop Joseph de Metz-Noblat of Langres, a French diocese close to where Mother Garnier grew up.
Cardinal Angelo Amato, the prefect of the Vatican’s Congregation for the Causes of Saints, wrote to the bishop during the summer to inform him that investigations could proceed and instructing him to establish a tribunal within his diocese to examine Mother Garnier’s life and writings.
The conclusions of the local tribunal will be eventually sent to the Vatican and scrutinised by theologians and historians ahead of the miracle needed for Mother Garnier’s beatification – when she will be given the title Blessed – and another for her canonisation, when she will be recognised as a saint.
Mother Xavier McMonagle, the assistant Mother General of the Tyburn Nuns, said the nuns had sought the opening of the cause for 20 years.
“It has been a long time, but that’s not such a bad thing,” she said. “It has given us time to research her writings.”
Mother Garnier was born near Dijon in 1838. She worked as a governess and turned down a marriage proposal so she could establish her religious order in Montmartre, Paris, at the end of the 19th century.
She gathered together a community of women dedicated to the “perpetual” – or non-stop – adoration of the Holy Eucharist.
The fledgling community was persecuted by the Devil, with cases of obsession and diabolical possession and objects overturned, picked up and thrown around rooms.
On one occasion the sisters were coated suddenly with particles of altar breads and one of them was struck by invisible blows.
But it was the anti-clerical Law of Associations which caused the nuns to flee to London in 1901.
They came first to Notting Hill then in 1903, with the help of a cash gift, purchased a house on the north side of Hyde Park, just yards from the site of the Tyburn gallows, upon which 105 Catholic martyrs perished during the Protestant Reformation.
Today Mother Garnier’s tomb has become a place of pilgrimage for people from across the globe.
Her order of contemplative Benedictine nuns – properly called the Adorers of the Sacred Heart of Jesus of Montmartre – has also spread rapidly around the world and in the last few decades has opened new convents in South America, Africa, France and New Zealand.
Pope St John Paul II also invited the nuns to open a convent close to the Vatican with the request to pray especially for him and his successors.
In 2012, Fr Gianmario Piga, an Italian priest, wrote a spiritual biography of the nun, in which he analysed her letters and other writings in great detail.
In the book, The Path of Mother Adele Garnier, Fr Piga revealed her to be a mystic who had experiences comparable to those recorded by such great spiritual writers as St Teresa of Avila and St John of the Cross.
He showed how in one letter to Abbé Charles Sauvé, a priest friend, she described how she saw the Blessed Sacrament turn to bloody flesh.
“At the moment in which the priest took a particle of the Holy Host and put it into the chalice I raised my eyes to adore and to contemplate the holy particle,” she wrote.
“Oh, if you could know what I saw and how I am still moved and impressed by this vision,” she continued.
“The fingers of the priest held not a white particle but a particle of striking red, the colour of blood and luminous at the same time … The fingers of the priest were red on the right of the particle, as from a blood stain that seemed still wet.”
The Vatican Press not only volunteered to publish the work but also gave the book its premier launch in the Vatican’s Marconi Hall on the Feast of the Sacred Heart of Jesus.
The key address was given by Fr Federico Lombardi, then Pope Benedict XVI’s spokesman, who stressed the importance of Mother Garner’s teachings.
A year later Pope Francis presented the nuns with an engraved gold chalice as a gift to mark the opening of their first French Convent at St Loup-sur-Aujon, near Dijon.
Last week, Cardinal Vincent Nichols celebrated Mass in Tyburn Convent to mark the golden jubilee of the Tyburn Association of Adoration, a lay movement which shares the perpetual adoration with the nuns.
In his homily, the cardinal described Tyburn Convent as “a visible representation of the goal towards which the entire Church is journeying”.
He said: “Mother Garnier wanted each one of her convents not only to be a place in which Jesus is continually adored in the Blessed Sacrament, but also to be a place in which lay people could share in this perpetual adoration. The association fulfils her deep desire.”

Interview: The husband of Chiara Corbella on his wife’s sacrifice and possible canonization 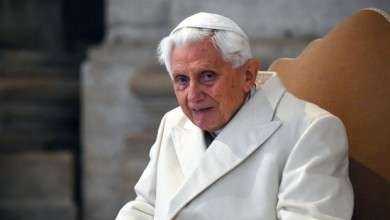