It’s impossible to know how much the saints are doing for our world. Every once in a while, we get a glimpse of a piece of it …

Loretta was my high school sweetheart, and we began “dating” when we were about 15. Several years later, after both my parents had passed, and even though I now had three younger brothers to care for, she stood by me. Her family, especially her mom, was somewhat horrified at the thought of her daughter getting involved with a young guy with all the “extras,” and tried her best to stop her from marrying me.

However, she stood by my side, we got married, and came home from our honeymoon with only two of my brothers waiting for us. The youngest, Johnny, had moved in with my sister and her new husband, Bob.  Everything, although not traditional, was okay. We had stayed together as a family, and we had a home.

I had been sponsored into the Lathers and Reinforcing Iron Workers Union, one of the best building trades unions in New York City. By the time I was 22 I had finished my apprenticeship and was earning journeyman wages. Loretta and I had married when we were both 23 and moved to New Jersey from the Bronx. My brothers were both in high school, one a senior and the other a freshman, and besides feeling totally out of place at parent-teacher conferences, all went along fine.

A few years passed by like that, until out of the blue, I started to stumble a bit and lose my balance. Sometimes I appeared to have been drinking. Then I experienced what is known as a “foot drop.” My left foot was flopping around as I walked, as if it was not mine. I remember it so well; as I walked the foot would go “splat-splat-splat” with every step I made. It was like it belonged somewhere else, not at the end of my leg.

I was admitted to the Neurological Insitute at Columbia Presbyterian Hospital in NYC. After five days undergoing various neurological tests including a myelogram, it was determined that I “probably” had multiple sclerosis. My doctor informed me that it would gradually get worse but was very unpredictable and could go into remission. At that time, it was impossible to give a precise prognosis for the illness.

I could no longer work in the construction industry but was still getting around okay. Physical therapy had helped me to get some of my foot function back and I could walk with a limp and drag the foot instead of having it go “splat-splat.” So I bought a used van and started a small package delivery service.

I managed to make ends meet for a while and then the illness reared its ugly head and the progression was quick. I could barely stand and before I knew it, I was using Canadian Quad canes for support to get around. My doctor recommended we move to Florida. The rationale was simple: no ice, no snow, and it would be much easier to walk around with crutches.

Loretta’s maid of honor and best friend, Angie, had moved to Florida several years earlier. She was encouraging us to move there. My brothers were young men and now on their own. Danny had gotten married and Bobby was working as a trucker. It was just Loretta and me and the kids. We sold our small house and headed south.

Angie updated us about the area and the schools and helped us find a place. I actually managed to start making some money writing resumes, but I was getting worse and my new neurologist told us I would be blind, incontinent, and in a wheelchair within a year or two.

It was Christmas of 1980. We had three small kids, no money, and things were looking bleak. I had received medical assistance from County Social Services, food stamps, and prescriptions (our Billy, age seven, was asthmatic and needed inhalers and a few other things I cannot remember; Loretta was diabetic and needed some meds to help her keep her blood sugar at acceptable levels — the insulin would come a few years later). And that is how life was.

Thursday, January 8, 1981, was Loretta’s birthday. I had taken the boys to school and on the way home picked up Egg McMuffins at McDonald’s. Loretta loved those, and it was her birthday. Mary was only three, and I know I got her something; what it was, I can’t remember.

When I walked back into our apartment my wife was standing there next to the dining room table. She had her arms outstretched and was smiling ear to ear. I was trying to process whatever was happening. “Well,” she says, “What do you think?”

I said nothing but on the table were all these birthday cards, all opened and standing next to each other forming a semi-circle. She pointed to the cards and said, (I remember the words as if it was yesterday): “Today is my birthday, and I got the only present I wanted.”

“Look at the cards, look at the cards. Every single one is covered with roses. I prayed a novena to St. Therese that you would get better and just look. I don’t even know half the people who sent these. But every card has roses on it. You are going to be fine. St. Therese just told us. You will be fine.”

There was no instant cure. But that very day I tossed my Canadian Quads and began using a regular cane. I started going to Easter Seals for rehab and after three months I was doing a lot better than expected. In due time I tossed the cane too. If you saw me today you would never know I had MS. My urologist who treated my prostate cancer and is a great doctor tells me, “I think they made a mistake. I don’t believe you had MS.” Most of my friends have no clue either, just some old ones from way back when.

Our fourth child was stillborn during Loretta’s sixth month. She was a girl and we named her Therese. I am so glad we did.

Happy feast day, Little Flower. I love you. Thanks again. 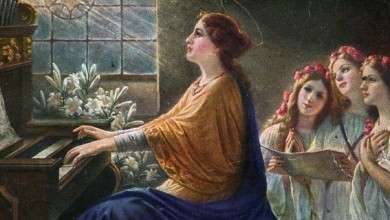 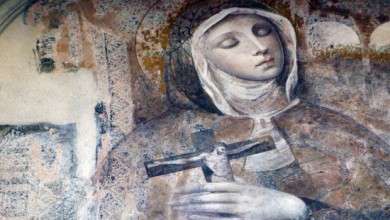 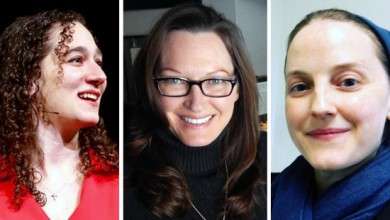 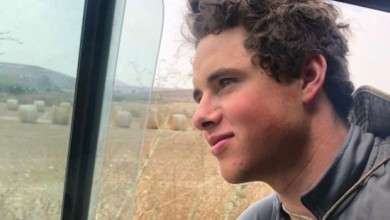