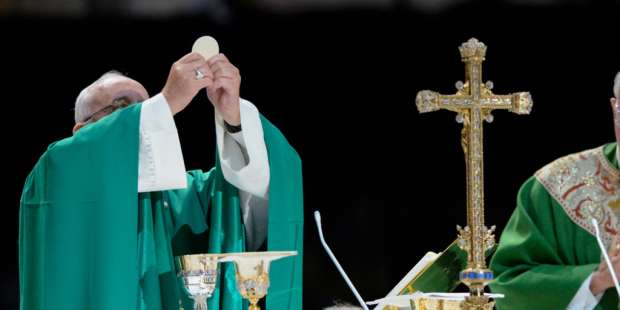 A Polish magazine tells of Cardinal Jorge Bergoglio, and an event in Buenos Aires

After we shared the news of a 2013 Eucharistic miracle just approved in Poland, a reader forwarded to us an interesting piece (written in 2010, during the pontificate of Benedict XVI) from the Polish magazine, Miłujcie się! (Love One Another). It concerns yet another Eucharistic miracle, and the man who would eventually succeed Benedict:

It seems that on August 18, 1996, as Fr. Alejandro Pezet was ending Mass at the parish of Santa Maria y Caballito Almagro, a woman reported that a Host had been desecrated on a candleholder in the back of the church. Unable to consume the Host, Fr. Pezet placed it in a dish of water and stored it in the tabernacle.

The following Monday, the priest opened the tabernacle and found that the Host seemed to have become a bloody substance:

He informed Cardinal Jorge Bergoglio, who gave instructions that the Host be professionally photographed. The photos were taken on September 6. They clearly show that the Host, which had become a fragment of bloodied flesh, had grown significantly in size. For several years the Host remained in the tabernacle, the whole affair being kept a strict secret. Since the Host suffered no visible decomposition, Cardinal Bergoglio decided to have it scientifically analyzed.

On October 5, 1999, in the presence of the Cardinal’s representatives, scientist Dr. Ricardo Castanon Gomez* took a sample of the bloody fragment and sent it to New York for analysis. Since he did not wish to prejudice the study, he purposely did not inform the team of scientists of its provenance. One of these scientists was Dr. Frederic Zugiba, the well-known cardiologist and forensic pathologist. He determined that the analyzed substance was real flesh and blood containing human DNA. Zugiba testified that, “the analyzed material is a fragment of the heart muscle found in the wall of the left ventricle close to the valves. This muscle is responsible for the contraction of the heart. It should be borne in mind that the left cardiac ventricle pumps blood to all parts of the body. The heart muscle is in an inflammatory condition and contains a large number of white blood cells. This indicates that the heart was alive at the time the sample was taken. It is my contention that the heart was alive, since white blood cells die outside a living organism. They require a living organism to sustain them. Thus, their presence indicates that the heart was alive when the sample was taken. What is more, these white blood cells had penetrated the tissue, which further indicates that the heart had been under severe stress, as if the owner had been beaten severely about the chest.”

You can read the whole article, written by Fr. M. Piotrowski, SChr here.

Faith does not depend on miracles, and these phenomena will never be satisfactorily explained, but they can serve as helpful focuses in dry times, and as sound reminders that no matter how much we think we know, we cannot even begin to approach the ways or purposes of God. As Thomas Aquinas himself said after a vision that caused him to lay down his busy pen: “I can write no more. I have seen things that make my writings like straw.”

*Also of interest:
In the video below, Dr. Gomez explains the investigation of the Buenos Aires event, and reminds us that the Feast of Corpus Christi was created due to a Eucharistic miracle: