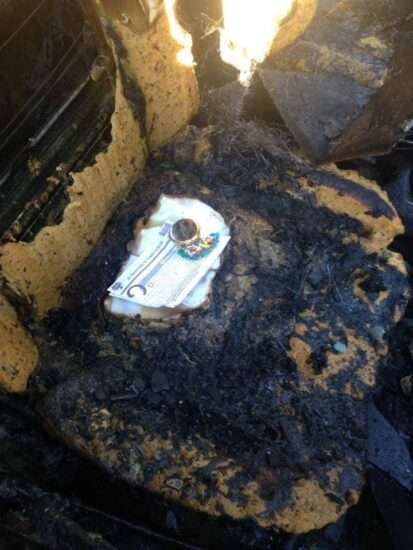 The image of an intact Eucharistic pyx on the seat of a burned car has gone viral.

The pyx holder is used to bring the Eucharist to people who for a serious reason cannot participate in Mass.

The fire occurred last Sunday, July 8, in the city of Franca in the Brazilian state of Sao Paulo. María Emília da Silveira Castaldi, an extraordinary minister of the Eucharist, was going to take her car out of her garage but it caught fire. After the accident, a Eucharistic pyx, a sheet with a prayer, and a rosary were left intact.

Although some have pointed out that the Eucharist was inside the pyx holder and that it remained intact. However, the truth is that the object was empty and did not contain any consecrated host.

Speaking to ACI Digital – ACI Group Portuguese agency – María Emília specified that “the pyx was empty” since when the Eucharist is finished, the first thing to do is to “purify” the object. That means that with a cloth called a purifier, all the particles of the host that could have remained in it are removed.

The woman also related that once her:

“car was placed on the street, I wanted to open it to get everything out. But they wouldn’t let me because I could burn.” Firefighters arrived at the scene and controlled the fire that “did not last more than 15 minutes,” he added.

“In fact, the entire car burned, a gown, the liturgy book, the corporal. The pyx holder, the rosary, and a prayer remained intact. That brochure was intact. Or wet with water from the firefighters, ”

the woman explained to ACI Digital.

And María Emilia also said that in her opinion.

“If this fact served as a testimony of faith for at least one person, therefore it was worth it”.

After what happened, María Emília spoke with the Bishop of Franca, Mons. Paulo Roberto Beloto, “who listened to me with interest, great charity, docility, and kindness.”

According to the Communication Ministry of the Diocese of Franca, the Bishop said:

“We cannot deny that God can communicate something to us through the facts of life. But they are particular experiences that we respect”, however “we cannot measure our faith, our experience of God and of the Church through events like this ”.

“What God has to communicate to us concretely, about his truth and his will, is present in the Sacred Scriptures, in the Revelation of Our Lord Jesus Christ and in the Magisterium of the Church.

This is our security and the path we must follow ”, said the prelate.

Free contraception to be offered to the poor in the Philippines