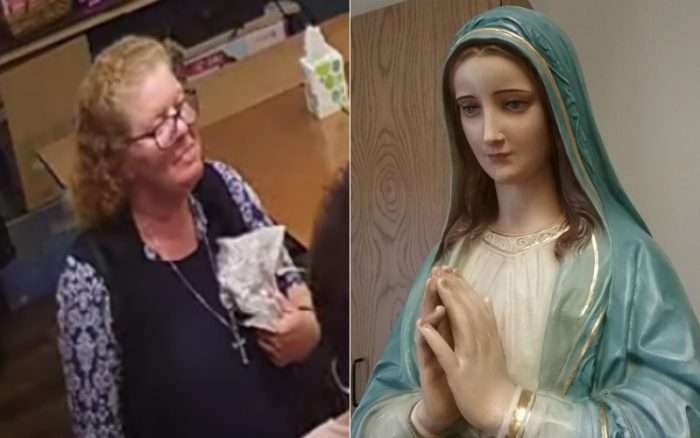 The news comes as a result of a woman claiming she is a Marian visionary.

Bishop Michael Olson of the Diocese of Fort Worth recently released a statement saying these alleged apparitions under the title of “Mystical Rose-Our Lady of Argyle” are false.

The fake visionary claims Mary, several saints, and Jesus have appeared to her at various parishes across the North Texas area since 2017.

She also claims multiple miracles occur as a result of these visions. She says rose petals miraculously appear, water mysteriously flows on the parish’s campus, she claims she has the stigmata, and that Mary statues miraculously bleed.

However, one woman spoke exclusively to ChurchPOP, revealing she cleaned one of the “miraculously bleeding” statues.

Suzanne Stack is a parishioner of St. Mark Catholic Church. The parish asked her to clean one of the statues in Dec. 2017. At the time, she had no idea the “visionary” existed, so she did not think to take photos of the vandalized statue.

Stack said the false visionary painted the statue as if “there was something pulsing out of the heart area.”

“When I walked into the sacristy, you could tell from the texture and by the way the light hit it, that it was latex. When I pressed my finger, it made a little dent, which meant it had been there for a little while, but it wasn’t totally hard.

“So I started working on it. It took me a while to get it off because it was kind of a pinkish blush. It had been on there, but thick. You could see deep brush strokes in it–nail polish brush strokes.”

Stack explained that the latex product the false visionary used is not readily available in most stores. Amazon sells it, however, along with a nail polish brush. Stack said people use this product as body paint for Halloween costumes.

“I hadn’t heard anything about any of this stuff up until about a month and a half ago when this lady talked to a friend of mine and me about ‘the miracles’ and she mentioned ‘the statue.’”

She discovered that the statue believers recently mentioned was the same statue she cleaned in 2017.

Stack immediately sent Bishop Olson a letter explaining her experience. She said the paint “was definitely applied” and “this ain’t no miracle.”

The artist added that someone witnessed the false visionary spreading paint spots all over the parish’s courtyard. They cleaned it with a power washer.

“It was applied in spots around the courtyard. I’ve seen pictures of it, and it was the exact same material applied to the statue I cleaned.”

“I think she’s conned everybody,” Stack said. “She’s got problems and she’s darn good at what she does.”

Stack added that people in the community “are devastated” because “we all want to believe that Mary is showing up.”

“People turn their backs to me, that I know. I don’t blame them. I could have been that person, had I not cleaned that statue–had I been in their shoes. But I cleaned the statue, so I know better.”

Stack also said the woman could have used the latex paint to draw the stigmata on herself, especially since it is a body paint.

The fake visionary also says she “was possessed by demons,” while planting the roses, but Stack believes otherwise. She said the website was recently altered to include demonic attacks.

“She couldn’t even approach the Eucharist if she was really possessed by the devil. There’s just no way,” Stack said. “You’d think the demon would know that there was a camera there. I’m not buying it.”

Stack explained her one takeaway from all this – that by following Bishop Olson’s lead, “we’re being faithful, humble, and obedient” to Mary’s requests in each apparition.

“Mary, every time she comes, she’s asked us to be faithful, humble, and to be obedient. So we’re doing what she wants us to do by following our bishop.”