Catholic pilgrims from around the world, many sick or disabled, flocked to Lourdes on Monday under exceptional security after recent extremist attacks.
Armed soldiers and police patrolled the train station, town centre and inside the sanctuary at Lourdes, where a 19th-century village girl had visions of the Virgin Mary.
As a helicopter circled overhead, visitors bearing candles and banners streamed toward the grotto and the sprawling plaza of the basilica, apparently undeterred by new security restrictions or the recent attacks.
Crowds began gathering at the sanctuary before dawn for a series of outdoor Masses in multiple languages celebrating the Feast of the Assumption.
Thousands attended a candlelight procession on Sunday night, though the route was reduced from past years to ensure better security.
French authorities had already been planning extra security for the annual holiday, but concerns mounted after a series of attacks in July — notably the July 26 murder of Fr Jacques Hamel in Saint-Étienne-du-Rouvray, Normandy.
Lourdes officials refused to cancel this year’s pilgrimage, although some other summer festivals around France have been dropped.
To reach the Lourdes sanctuary, pilgrims proffered up their bags for repeated checks, and authorities funnelled visitors through three access points, reduced from past years.
Roads were closed to allow pedestrians, some in wheelchairs, to reach the site unhindered. Car attacks are a new concern after a driver rammed his truck into Bastille Day revellers in Nice last month, killing 85.
Nearly 300 extra forces were brought to Lourdes — including mobile intervention teams, soldiers, bomb squads, canine units — to help local forces, raising the overall security presence to over 500.
The Catholic Church has recognised dozens of miracles at Lourdes since villager Bernadette Soubirous, gathering stones in the grotto in 1858, had visions of the Virgin Mary. 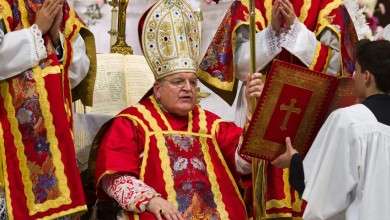