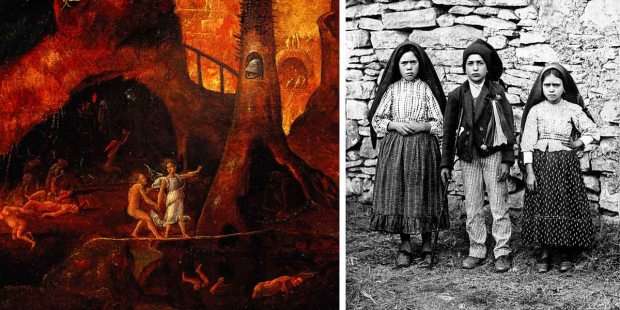 Sister Lucia was grateful it only lasted for a short moment.

Throughout history, various individuals have been granted a unique vision of the afterlife, often being taken to Heaven or Hell by an angel or the Virgin Mary. These private revelations were granted by God to help an individual better understand what awaits a soul after death.

Sister Lucia, one of the three visionaries of Fatima, wrote down in her memoirs a vision of Hell that was given to them by the Virgin Mary. It describes Hell as a “vast sea of fire” and was a terrifying sight to behold, especially for the three children who saw it.

[Mary] opened Her hands once more, as She had done the two previous months. The rays [of light] appeared to penetrate the earth, and we saw, as it were, a vast sea of fire. Plunged in this fire, we saw the demons and the souls [of the damned].

The latter were like transparent burning embers, all blackened or burnished bronze, having human forms. They were floating about in that conflagration, now raised into the air by the flames which issued from within themselves, together with great clouds of smoke. Now they fell back on every side like sparks in huge fires, without weight or equilibrium, amid shrieks and groans of pain and despair, which horrified us and made us tremble with fright (it must have been this sight which caused me to cry out, as people say they heard me).

The demons were distinguished [from the souls of the damned] by their terrifying and repellent likeness to frightful and unknown animals, black and transparent like burning coals. That vision only lasted for a moment, thanks to our good Heavenly Mother, Who at the first apparition had promised to take us to Heaven. Without that, I think that we would have died of terror and fear.

This vision of Hell is reflective of the description found in the Roman Catechism from the Council of Trent, which describes Hell as a “most loathsome and dark prison in which the souls of the damned are tormented with the unclean spirits in eternal and inextinguishable fire. This place is called gehenna, the bottomless pit, and is hell strictly so ­called.”

This image of Hell is also derived from these words of Jesus in the Gospel, “If your hand causes you to sin, cut it off. It is better for you to enter into life maimed than with two hands to go into Gehenna, into the unquenchable fire.” (Mark 9:43)

In biblical terms, “Gehenna” is the Greek term for a valley southwest of Jerusalem. It was a place where pagan sacrifice occurred, including the burning sacrifice of children. During Jesus’ time, it was a garbage dump where refuse was continually burned. Thus, Hell is associated with a place of perpetual fire and pain.

The vision Sister Lucia was granted was terrifying and reminds us all that Hell is not some “party for sinners,” but a terrible place, one to which we would never want to go.