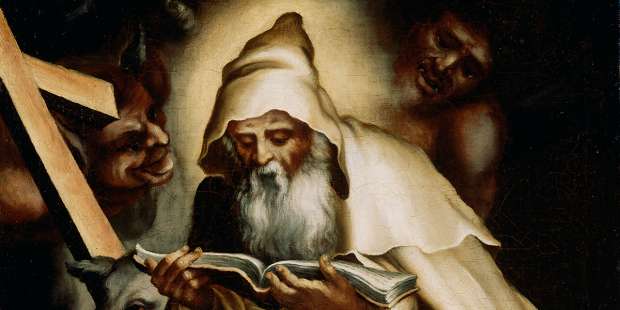 Home » Articles » Fight anxiety by drawing strength from this icon of St. Anthony

We can draw strength for our own battles — both spiritual and temporal — by contemplating St. Anthony’s victories and calling on his intercession.

The devil was undoubtedly well aware of the untold graces that generations of monks would bring upon the Church by following the example of St. Anthony, and so he persecuted the poor monk relentlessly, as told by Anthony’s biographer, St. Athanasius.

We can draw strength for our own battles — both spiritual and temporal — by contemplating St. Anthony’s victories and calling on his intercession.

One painting, by Lelio Orsi from the 16th century, points the way.

This Temptation of St. Anthony shows him serenely reflecting on Scripture, his calm soul illuminating the cave, while bestial demons plague him from the darkness. It’s a great icon for dealing with depression and anxiety, as Anthony knows where to keep his eyes focused. His calm center enfeebles the demons, who clamor for his attention to no avail.

The grotesque creatures to the left and upper left of the painting have their tongues sticking out, and we can imagine the vileness they sputter … or is it with the plain stupidity of a childish taunt that they attempt to distract the saint?

Whatever their strategy, they find no success. Anthony is shrouded in light and becomes light, such that although the demons are not chased away, their power is extinguished.

An interesting detail is the pig at Anthony’s right. The little creature looks off the canvas, as if the demons persecuting his master have bored or even amused him.

St. Anthony the Abbot is portrayed with a pig because of various traditions. One notable link is one of his patronages. The Hospitallers of St. Anthony of the Middle Ages cared for the poor in urban areas. To finance their charity, they raised swine, which led to Anthony often being depicted in art with a pig. But as well, tradition tells of a pig that he healed, as well as animals that helped him keep his hours of prayer.

Especially in Spain, St. Anthony the Abbot is recognized as patron and protector of animals, and for his feast or the day after, animals are brought to a priest for a blessing.