Have you heard about the new scourge of Satanic rosaries, produced by the Illuminati, infiltrating the Catholic world to capture unsuspecting Catholics?

“Listeners, be careful as the rosaries you might be using could actually be infested or cursed,” Fr. Ambrosio Nonato Legaspi, head exorcist of the Diocese of Novaliches, warned on the radio, according to the CBCP report. He claimed that rosaries with strange occult symbols are being created by the Illuminati Satanists and cursed so that evil spirits will follow any Catholics who use them.

“Often made of plastic,” the CBCP report explains, “the symbols could either be a snake wrapped around the cross, a pentagram, and/or a sun with rays, an insignia of the Illuminati.” Sometimes, however, there are no symbols, but the Satanic curse has still be added.

Fr. Legaspi’s assistant Philippe De Guzman, who was also on the radio show, revealed that while these supposed Satanic rosaries had been discovered before, they determined that a Satanic rosary was the cause of a demonic infestation they recently dealt with.

As a safety measure, they recommended that priests perform minor exorcisms on any religious items they can.

“Not just a blessing,” Fr. Legaspi emphasized, “these items should be exorcised. Not just an ordinary blessing where water is just sprinkled–as most priests commonly do–but to use the Catholic ritual…that would frighten the demon away.”

Below is a video explaining some of the supposed satanic imagery on rosaries:

The spiritual realm, which includes the demonic, is absolutely real. Places and objects can indeed be “infested” with evil spirits. Occult practices are evil and should be avoided.

But does that mean there’s an Illuminati making rosaries with secret Satanic symbols on them, cursing them, and then distributing them to the faithful? It certainly seems far fetched.

And the supposed Satanic symbols could have many possible meanings. The suns might represent the glory of Christ on the cross; the “snake” may actually be a vine, since Christ called himself a Vine (John 15), or it might represent the fact that the Cross is the new Tree of Life; and the pentagrams could just be stylized ends of the Cross, which are common.

But I suppose anything is possible, and a full-time exorcist is certainly going to have more insight into this area than the average person. 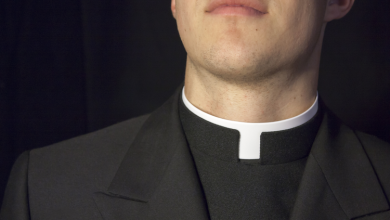 What happens when a Catholic priest fathers a child? A Vatican cardinal answers

Pope prays for victims of weekend blasts in Turkey