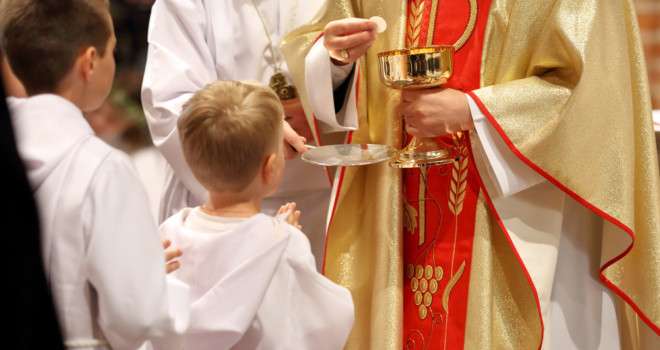 Five Holy Habits You Can Teach Your Children

Home » Articles » Five Holy Habits You Can Teach Your Children

It’s been a long while since I’ve made any official New Year’s resolutions — not because I eschew goal-setting or because I lack ambition (quite the contrary), but because I believe that we have many opportunities to start over throughout the year.  Why does improving our lives have to only occur during a new calendar year?

You see, most people are well-intentioned when they set goals for the New Year, but then we hear about how these quickly fizzle and fade, never to be revisited again.  Instead of beginning anew only once a year, I’ve adopted the Al-anon concept that each day presents multiple moments in which we can change our ways and essentially repent.

Repentance and resolutions might go hand-in-hand, but when it comes to raising children I think it’s wiser to apply the “start over each day” rather than firmly plan on annual changes that will automatically and dramatically shift the dynamics of the home.  Our kids remind us that life is messy and non-linear, unlike those lofty resolutions toward which we may be inclined to strive.  That’s why it’s best to take life in snippets or fragments of moments, rather than in days, weeks, months, or years.  When we put our minds and hearts in the present moment, we’re more likely to succeed in helping our kids grow in happy, healthy, and holy ways.  In turn, we will find ourselves also becoming more virtuous as we ‘train our child in the way he should go.’

Here are five holy habits you can help your child work on this year – day by day, of course!

If you have small children, you will understand why patience is such a vital holy habit to foster.  In our home, two little girls find that time ticks all too slowly, and they are hardly able to wait for pretty much anything — dinner, a fun activity, the school bus, a visit with Nana and Papa, you name it.  How in the world do we get our kids to learn that this virtue of ‘long-suffering’ is necessary to their interior life and survival in the world?

A lot of parents acquiesce to their kids’ whining, incessant complaining, and otherwise badgering.  I’ll admit that I’ve done this a few times out of exasperation.  But I think it’s important to note that our children watch us more than they do what we say.  So, if I’m not exhibiting patience while we’re stuck in traffic or behind a slow-moving vehicle (both of which are highly probable in the rural area where we live), why would my girls learn a better behavior than mine?

One way we’ve taken small steps toward growth in patience is by setting some ground rules about why we wait and how waiting can be used as an opportunity to offer up our frustration as a prayer for those who come to mind. My daughter, Felicity, in particular is very sensitive to the suffering world and its people, so this works well for her.  Sarah, the boisterous and loquacious one, benefits more from our verbal boundaries, that old adage, “If you can’t say something nice, don’t say anything at all.”

The bottom line is that we call each other out (yes, the grown-ups, too) when we’re grousing about how we wish something or someone would hurry up.  Then we say a silent prayer of sacrifice for whatever intention we wish.

Kindness is very important to our family because of Sarah’s craniofacial condition. We all know that children can be cruel to each other due to differences in appearance or personality. Very small kids likely will blurt out what they’re thinking (no holds barred) without any malicious intent, though. But we’ve discovered that one is never too young to practice kindness toward another.

Kindness is very closely related to the beatitude of meekness, as well as to the theological virtue of charity. In fact, all virtues are born from the greatest master of charity.  But kindness, when demonstrated, is really about how we treat other people.  Again, cliches work well with kids, so we say, “Let’s treat people how you want to be treated.”

Children notice differences – in opinion, dress, size and weight, manner of speech – pretty much everything.  We’ve told our girls from a young age that God made us all different, because we each have something special to offer the world.

One way we reward hidden acts of kindness is with a special dinner plate from Fruit-full Kids that says, “The fruit of the Spirit is…kindness.”  (Tip: They also have one for patience and generosity!)  It’s always a hit when one of our girls earns it and we explain what she did.

Because of our concupiscence, we all tend to be selfish creatures.  Kids exemplify selfishness very obviously by hoarding things, their unwillingness to share toys, and a general sense of “what’s mine is mine and what’s yours is mine.” Therefore, part of our job as parents is to cultivate a spirit of generosity through giving.

When Felicity was almost six years old, she started asking us about world events that she overheard Ben and I discussing. Shortly thereafter, she developed a deep concern for the poor and began praying for them daily. When she mentioned that she didn’t really need or want any presents for her birthday, we suggested that she consider ways to help the poor instead.

As children witness the joy in giving to others, they become more open-hearted to gratitude for what they have, rather than griping about their lack.  Some suggestions for fostering generosity include having your children donate toys and books in good condition, collecting food pantry or monetary donations instead of gifts for birthdays and holidays, and even volunteering as a family at your local homeless shelter.

Dishonesty is a tricky habit for children to overcome, because there are so many forms of lying that they learn work to get them what they want: sneaking, concealing a wrong, deceiving, snooping, stealing, etc.  It’s important to help your child understand that deception in any form is sinful and hurts them, as well as those to whom they lie.

Children tend to lie, because they don’t want to get in trouble or because they flat-out want something they know they aren’t supposed to have.  It’s not difficult to catch a child being deceitful, but instilling honesty is a far bigger feat for parents.

When your child is truthful about a wrongdoing, extend mercy and meekness instead of a harsh punishment.  Explain that you are proud s/he chose to be brave and tell the truth, which is why their consequence isn’t as tough as it would be if s/he lied.  If you catch your child telling a fib, it’s a good idea to have him write a short apology note and rectify the situation by returning what was stolen, working extra chores to pay for what was broken, etc.

We also like to read books that teach lessons, which are commonly called “social stories” these days.  There are two older series’ of books (both out of print) that both of our girls really enjoy and request to hear on a daily basis: The “Help Me Be Good” series, which includes titles regarding forgetfulness, carelessness, selfishness, sneaking, cheating, complaining, etc.  The other series includes the “Christopher Churchmouse” books, which actually attach a Biblical lesson and Scripture verse to the lesson.

As a child grows in spiritual maturity, she will slowly understand that virtues require arduous effort, but that if she chooses what is good, right, and true, she will grow in strength to withstand future temptations.

Again, disobedience comes more naturally to us than to submit to authority due to our sinful nature, so it comes as no surprise that children will spurt out, “I don’t want to and I don’t have to!” from toddlerhood on up.  If we don’t give them options, they will probably get away with their disobedience, and we will lose our foothold as parents.

That’s not to say we should be constantly punitive, but parenting is always a delicate balance between justice and mercy.  In this case, we give our girls choices, and if they choose neither, then they receive a consequence – corner time, losing a toy or privilege, or a written apology if mouthing off is included.

For example, after dinner, I ask Felicity, “Would you like to rinse off your plate first or clean up toys?”  Both are her responsibility, and she knows it.  In the beginning, there was much resistance, but now she rarely complains, understanding that she must do both but that she has some liberty as to what order in which to complete each task.

Don’t be discouraged by your parenting efforts.  The key to instilling holy habits in your child – at any age – is to continue to model virtuous behavior to them, explain each virtue and perhaps read a saint profile for each, and set high expectations for considerate behavior.  The world will constantly be pitting against you, but remain firm and steadfast in your resolve to keep moving forward in faith, hope, and charity.  And don’t forget to start over – several times a day if necessary.  New beginnings are always available to us.