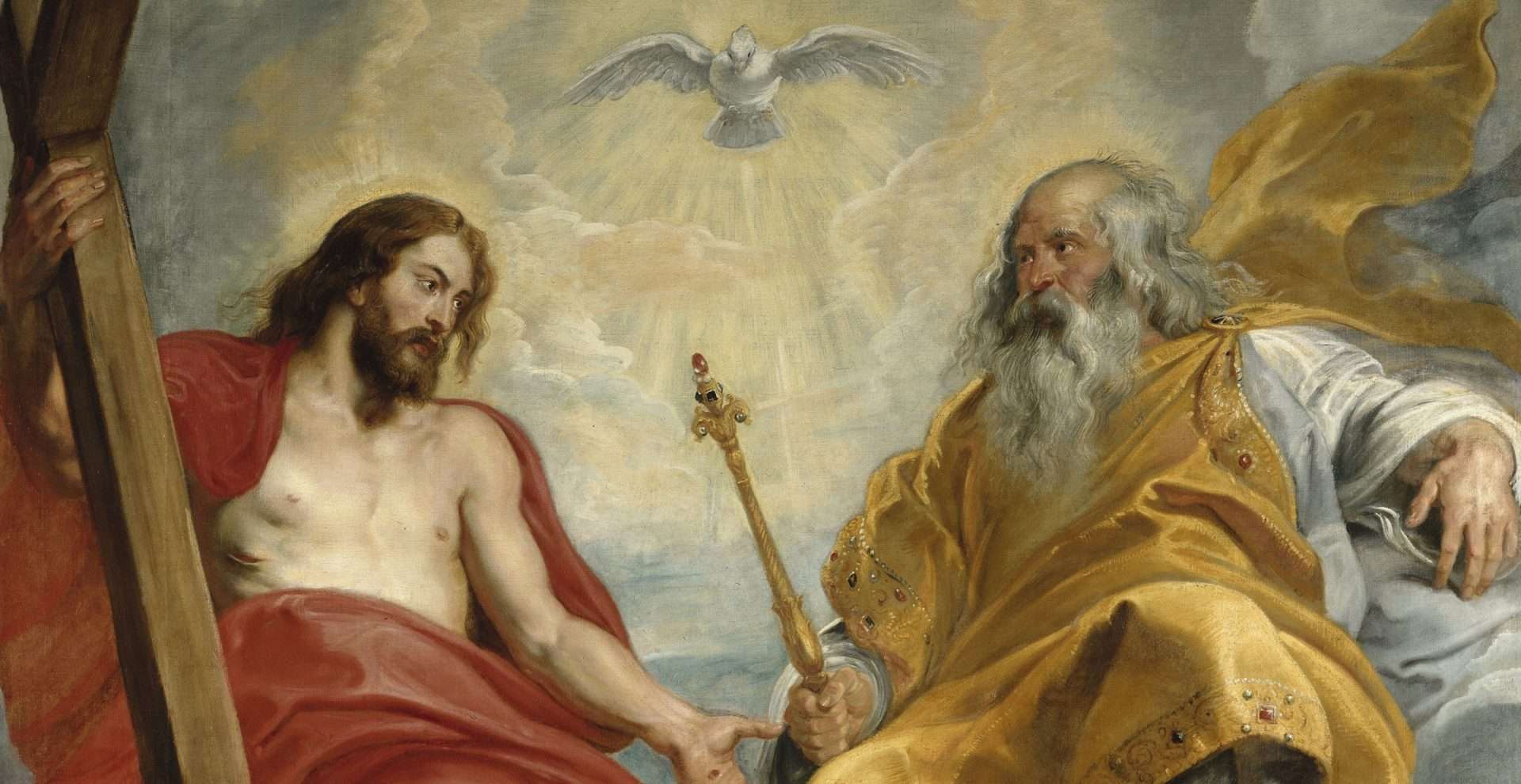 The early Christians were quick to spot new heresies. In the third century, Sabellius, a Libyan priest who was staying at Rome, invented a new one. He claimed there is only one person in the Godhead, so that the Father, the Son, and the Holy Spirit are all one person with different “offices,” rather than three persons who are one being in the Godhead, as the orthodox position holds.

Of course, people immediately recognized that Sabellius’s teaching contradicted the historic faith of the Church, and he was quickly excommunicated. His heresy became known as Sabellianism, Modalism, and Patripassianism. It was called Sabellianism after its founder, Modalism after the three modes or roles which it claimed the one person of the Trinity occupied, and Patripassianism after its implication that the person of the Father (Pater-) suffered (-passion) on the cross when Jesus died.

Modalism quickly died out; it was too contrary to the ancient Christian faith to survive for long. Unfortunately, it was reintroduced in the early twentieth century in the new Pentecostal movement. In its new form, Modalism is often referred to as Jesus Only theology since it claims that Jesus is the only person in the Godhead and that the Father, the Son, and the Holy Spirit are merely names, modes, or roles of Jesus. Today the United Pentecostal Church, as well as numerous smaller groups which call themselves “apostolic churches,” teach the Jesus Only doctrine. Through the Word Faith movement, it has begun to infect traditionally Trinitarian Pentecostalism. Ironically, Trinity Broadcasting Network, operated by Word Faith preacher Paul Crouch, has given a television voice to many of these Jesus Only preachers (who are, of course, militantly anti-Trinitarian).

In the quotes that follow, the Fathers’ forceful rejection of Modalism is shown not only when they condemn it by name, but also by passages in which they speak of one person of the Trinity being with another, being sent from another, or speaking to another.

“And further, my brethren, if the Lord [Jesus] endured to suffer for our soul, he being the Lord of all the world, to whom God said at the foundation of the world, ‘Let us make man after our image, and after our likeness,’ understand how it was that he endured to suffer at the hand of men” (Letter of Barnabas 5 [A.D. 74] emphasis added).

“The Son of God is older than all his creation, so that he became the Father’s adviser in his creation. Therefore also he is ancient” (The Shepherd 12 [A.D. 80]).

“Jesus Christ . . . was with the Father before the beginning of time, and in the end was revealed. . . . Jesus Christ . . . came forth from one Father and is with and has gone to one [Father]. . . . [T]here is one God, who has manifested himself by Jesus Christ his Son, who is his eternal Word, not proceeding forth from silence, and who in all things pleased him that sent him” (Letter to the Magnesians 6–8 [A.D. 110] emphasis added).

“God speaks in the creation of man with the very same design, in the following words: ‘Let us make man after our image and likeness.’ . . . I shall quote again the words narrated by Moses himself, from which we can indisputably learn that [God] conversed with someone numerically distinct from himself and also a rational being. . . . But this offspring who was truly brought forth from the Father, was with the Father before all the creatures, and the Father communed with him” (Dialogue with Trypho the Jew 62 [A.D. 155]).

“I praise you for all things, I bless you, I glorify you, along with the everlasting and heavenly Jesus Christ, your beloved Son, with whom, to you and the Holy Spirit, be glory both now and to all coming ages. Amen” (Martyrdom of Polycarp 14 [A.D. 155] emphasis added).

“It was not angels, therefore, who made us nor who formed us, neither had angels power to make an image of God, nor anyone else. . . . For God did not stand in need of these in order to accomplish what he had himself determined with himself beforehand should be done, as if he did not possess his own hands. For with him [the Father] were always present the Word and Wisdom, the Son and the Spirit, by whom and in whom, freely and spontaneously, he made all things, to whom also he speaks, saying, ‘Let us make man in our image and likeness’ [Gen. 1:26]” (Against Heresies 4:20:1 [A.D. 189] emphasis added).

“While keeping to this demurrer always, there must, nevertheless, be place for reviewing for the sake of the instruction and protection of various persons. Otherwise it might seem that each perverse opinion is not examined but simply prejudged and condemned. This is especially so in the case of the present heresy [Sabellianism], which considers itself to have the pure truth when it supposes that one cannot believe in the one only God in any way other than by saying that Father, Son, and Spirit are the selfsame person. As if one were not all . . . through the unity of substance” (Against Praxeas 2:3–4 [A.D. 216]).

“Thus, after the death of Zephyrinus, supposing that he had obtained [the position] after which he so eagerly pursued, he [Pope Callistus] excommunicated Sabellius, as not entertaining orthodox opinions” (Refutation of All Heresies 9:7 [A.D. 228]).

“[W]ho does not acknowledge that the person of the Son is second after the Father, when he reads that it was said by the Father, consequently to the Son, ‘Let us make man in our image and our likeness’ [Gen. 1:26]? Or when he reads [as having been said] to Christ: ‘Thou art my Son, this day have I begotten you. Ask of me, and I will give you the heathens for your inheritance, and the ends of the earth for your possession’ [Ps. 2:7–8]? Or when also that beloved writer says: ‘The Lord said unto my Lord, Sit thou on my right hand, until I shall make your enemies the stool of your feet’ [Ps. 110:1]? Or when, unfolding the prophecies of Isaiah, he finds it written thus: ‘Thus says the Lord to Christ my Lord’? Or when he reads: ‘I came not down from heaven to do mine own will, but the will of him that sent me’ [John 6:38]? Or when he finds it written: ‘Because he who sent me is greater than I’ [cf. John 14:24, 28]? Or when he finds it placed side by side with others: ‘Moreover, in your law it is written that the witness of two is true. I bear witness of myself, and the Father who sent me bears witness of me’ [cf. John 8:17–18]?” (Treatise on the Trinity 26 [A.D. 235]).

“And I should have enough to do were I to endeavor to gather together all the passages [of the kind in the previous quotation] . . . since the divine Scripture, not so much of the Old as also of the New Testament, everywhere shows him to be born of the Father, by whom all things were made, and without whom nothing was made, who always has obeyed and obeys the Father; that he always has power over all things, but as delivered, as granted, as by the Father himself permitted to him. And what can be so evident proof that this is not the Father, but the Son; as that he is set forth as being obedient to God the Father, unless, if he be believed to be the Father, Christ may be said to be subjected to another God the Father?” (ibid.)

“Next, then, I may properly turn to those who divide and cut apart and destroy the monarchy, the most sacred proclamation of the Church of God, making of it, as it were, three powers, distinct substances, and three godheads. I have heard that some of your catechists and teachers of the divine Word take the lead in this tenet. They are, so to speak, diametrically opposed to the opinion of Sabellius. He, in his blasphemy, says that the Son is the Father and vice versa” (Letters of Pope Dionysius to Bishop Dionysius of Alexandria 1:1 [A.D. 262]).

“But some treat the Holy Trinity in an awful manner, when they confidently assert that there are not three persons, and introduce (the idea of) a person devoid of subsistence. Wherefore we clear ourselves of Sabellius, who says that the Father and the Son are the same [person]. . . . We forswear this, because we believe that three persons—namely, Father, Son, and Holy Spirit—are declared to possess the one Godhead: for the one divinity showing itself forth according to nature in the Trinity establishes the oneness of the nature” (A Sectional Confession of Faith 8 [A.D. 262]).

“For the kingdom of the Father, of the Son, and of the Holy Ghost, is one, even as their substance is one and their dominion one. Whence also, with one and the same adoration, we worship the one deity in three persons, subsisting without beginning, uncreated, without end, and to which there is no successor. For neither will the Father ever cease to be the Father, nor again the Son to be the Son and King, nor the Holy Ghost to be what in substance and personality he is. For nothing of the Trinity will suffer diminution, either in respect of eternity, or of communion, or of sovereignty” (Oration on the Psalms 5 [A.D. 305]).

“[The Trinity] is a Trinity not merely in name or in a figurative manner of speaking; rather, it is a Trinity in truth and in actual existence. Just as the Father is he that is, so also his Word is one that is and is God over all. And neither is the Holy Spirit nonexistent but actually exists and has true being. Less than these the Catholic Church does not hold, lest she sink to the level of the Jews of the present time, imitators of Caiaphas, or to the level of Sabellius” (Letters to Serapion 1:28 [A.D. 359]).

“See, in short you have it that the Father is one, the Son another, and the Holy Spirit another; in person, each is other, but in nature they are not other. In this regard he [Christ] says, ‘The Father and I, we are one’ [John 10:30]. He teaches us that ‘one’ refers to their nature and ‘we are’ to their persons. In like manner it is said, ‘There are three who bear witness in heaven, the Father, the Word, and the Spirit, and these three are one’ [cf. 1 John 5:7]. Let Sabellius hear ‘we are,’ let him hear ‘three,’ and let him believe that there are three persons” (The Trinity 4:1 [A.D. 513]).