Archbishop emeritus Peter Leo Gerety of Newark, the oldest Catholic bishop in the world, passed away Sept. 20 at the age of 104 – 77 years after his ordination as a priest and after 50 years as a bishop.
“Today this local Church of Newark mourns a remarkable Churchman whose love for the people of God was always strong and ever-growing,” Archbishop John J. Myers of Newark said.
“He served as shepherd of this great Archdiocese during a time of spiritual reawakening in the years after the Second Vatican Council, and a time of deep financial difficulties. He very carefully led the Church, her people and institutions through those challenges,” Archbishop Myers continued.
The archbishop was born July 19, 1912 in Sheldon, Conn. He was the eldest of nine sons of New Jersey natives Peter L. and Charlotte Daly Gerety.
He grew up in Shelton and attended public schools. He won scholastic honors and captained the football team.
Gerety went on to work for the U.S. Department of Agriculture and the New Jersey Transportation Department before entering St. Thomas Seminary in Bloomfield, Conn. He was sent abroad to study at St. Sulpice Seminary in Issy, France. On June 29, 1939 he was ordained a priest at the Cathedral of Notre Dame in Paris for service in the Archdiocese of Hartford.
He served as a priest in the archdiocese for 27 years, mostly in New Haven. He especially focused on the needs of the black Catholic community. He founded the St. Martin de Porres Center, an interracial social and religious center. In 1956, the center became St. Martin de Porres Parish, with Fr. Gerety as its pastor.
The priest was an active member of the civil rights movement and took part in the March on Washington led by Rev. Martin Luther King, Jr.  He founded the New Haven chapter of the Urban League. He served on the Connecticut State Committee on Race and Religion and the National Catholic Conference on Interracial Justice.
In 1963, Pope Paul VI named Fr. Gerety a monsignor. In March 1966, the Pope named him Coadjutor Bishop of Portland, Maine. His episcopal ordination took place June 1, 1966 and he became Bishop of Portland in 1969 when his predecessor, Bishop Daniel J. Feeney, passed away.
Paul VI then named him Archbishop of Newark in 1974.
As Archbishop of Newark, he worked on outreach to Latin American and Black Catholic communities. As part of his efforts in adult faith formation, he established Renew International in 1978.  His work also included putting the archdiocese on a stable financial footing. Msgr. Franklyn Casale, now the president of St. Thomas University in Florida, served Archbishop Gerety as secretary, chancellor and vicar general of the Newark archdiocese.
“He saw the priesthood as a gift and that propelled his church leadership. He needed to share that gift,” Msgr. Casale told the New Haven Register. He said the archbishop “empowered the laity to take its part in the Church.”
Archbishop Gerety served on many committees of the U.S. bishops’ conference. He also worked with the Call to Action Committee, formed in 1976 during the American bicentennial to consider the needs of the Church. Call to Action was later notoriously co-opted by activists who campaigned against Catholic teaching.
He retired from active ministry in 1986 and was succeeded by Archbishop Theodore McCarrick, who would become Archbishop of Washington and a cardinal.
As Archbishop emeritus, Gerety officiated at baptisms, confirmations and other events as long as his health allowed. He partnered with Immaculate Conception Seminary at Seton Hall University to establish The Archbishop Gerety Fund for Ecclesiastical History. The fund supports studies of Catholic Church history in the U.S.
Archbishop Gerety passed away in the care of the Little Sisters of the Poor at St. Joseph’s Home for the Elderly in Totowa, N.J.
He is survived by numerous nephews and nieces.
Newark’s Cathedral Basilica of the Sacred Heart will receive the archbishop’s body at 3 p.m. on Sunday, followed by a viewing of the body. There will be another viewing period from 10:30 a.m. to 2:30 p.m. Monday, with a Mass of Christian Burial celebrated at the cathedral at 3 p.m.
With the archbishop’s death, Archbishop Bernardino Pińera Carvallo of Chile, age 101, is now the oldest living bishop, according to the website Catholic Hierarchy. 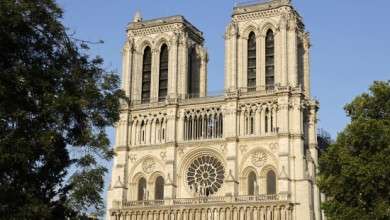 A year after the Notre Dame fire, its bells ring in support of health care workers