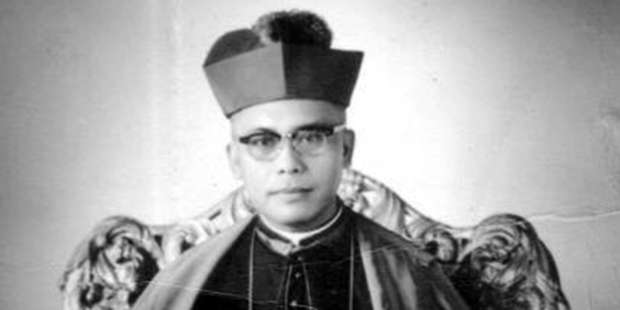 Home » Articles » He is set to become the 3rd saint from the Philippines: Meet Teofilo Camomot

Though an archbishop his health required he return to ministry as a parish priest; he embraced this mission with love

Teofilo (the name means “Lover of God”) Camomot was born on March 3, 1914, in Talisay, Cebu, which is located in the center of the Philippines. He was the third child of Luis Camomot and Angela Bastida, who would eventually have eight children together. Teofilo was baptized the day after his birth and received his Confirmation one year later, on March 4, 1915.

Teofilo grew up in an environment supervised by gentle, loving, and religious parents. He was liked by almost everyone who met him, and his kind and caring manner left an impression on people. Upon finishing elementary school, Teofilo decided he wanted to work on his father’s farm. He also chose to attend school to become an agriculturist.

But his mom was sure this was not his calling. She recognized something spiritual within her son and wanted him to nurture it. He showed a natural and empathetic love and compassion toward the poor and downtrodden, and she thought he might consider religious life. He was frequently gathering food and rice to give to those in need.

Her prayers and the fact that Teofilo’s older brother was already a priest helped direct Teofilo to the seminary. The young man entered the Seminary of San Carlos in Cebu in 1932. He was ordained to the priesthood on December 14, 1941, one week after the attack on Pearl Harbor. Because of the outbreak of the war, he had to celebrate his first Mass at home instead of in his parish.

Father Camomot was assigned to St. Teresa Parish in Talisay, Cebu, in 1943. He lived very simply, only using the basics to get by. His austerity was an example for all the parishioners, and so were his actions. Each day, before celebrating Mass, he would visit the sick, and in addition to giving them Holy Communion, would tend to their personal needs the best he could. They all came to love the young priest.

Father Camomot served at St. Teresa’s Parish for 12 years. Then, on March 25, 1955, things changed dramatically for Father Camomot. He was appointed the Titular Bishop of Clisma and the Auxiliary Bishop of Jaro, Iloilo. He was consecrated bishop on May 29, 1955. Even though he was now a bishop, he still continued visiting the sick and feeding the poor. His humility was an example for all in his diocese.

He was a favorite wherever he went. His caring ways and loving heart drew many to him. People wanted to be near him. They could feel the spirituality that surrounded him. One of his close friends, Msgr. Jose B. Buenaflor of La Paz, Iloilo, said, “He was a saintly man – devoted to prayer, to meditation, to conversion. [He was] a serious person, even while mingling with other priests… He was very charitable…Every time the poor went to him, he gave with all his heart…”

In 1959, Bishop Camomot was sent to the Archdiocese of Cagayan de Oro as the coadjutor archbishop. It was during this time that he expanded evangelization capabilities by forming communities dedicated to evangelizing. He founded the Pauline Faith Defenders and the Carmelite Tertiaries of the Blessed Eucharist. These would be the forerunners of the Daughters of Saint Teresa.

Archbishop Camomot participated in the Second Vatican Council, attending four different sessions from 1962 through 1965. The archbishop had suffered from kidney problems and in 1968 had to have surgery. His recovery time required him to resign as the coadjutor archbishop, and he was sent back to Cebu in 1970. Julio Cardinal Rosales assigned him back to his hometown of Carcar, Cebu, as a parish priest (he was still an archbishop) where, once again, his humility, generosity, and love for those less fortunate shined through. He saw the face of Christ in everyone

Wherever Archbishop Teofilo Camomot had gone during his life, he touched the hearts and souls of all who came in contact with him. He possessed the spiritual gifts of healing, reading hearts, and some even say they witnessed acts of bilocation.

Sadly, on September 27, 1988, while returning home, he was killed in a vehicular accident. He was 74 years old.

He has been declared a “Servant of God” and his cause for sainthood is with the Congregation for the Causes of Saints.

Servant of God Teofilo Camomot, pray for us.