These guidelines help a troubled soul discern the many movements that occur within the heart.

While bedridden from a serious injury, St. Ignatius Loyola began to wonder about the state of his own soul and the different feelings he experienced while making decisions. He wrote the following revelation in his autobiography (written in the third person).

He did not consider nor did he stop to examine this difference until one day his eyes were partially opened and he began to wonder at this difference and to reflect upon it. From experience he knew that some thoughts left him sad while others made him happy, and little by little he came to perceive the different spirits that were moving him; one coming from the devil, the other coming from God.

The revelation stayed with him for the rest of his life and was more fully elaborated in his Spiritual Exercises. There he was able to offer a specific set of rules for the spiritual life to help a troubled soul discern the movements of his/her heart and discover whether a good or evil spirit was influencing them.

Since then many have found consolation in his rules and return to them on a regular basis to better understand the movements of God in their soul. Below are the eight rules that St. Ignatius gives in his Spiritual Exercises.

Second Rule. It belongs to God our Lord to give consolation to the soul without preceding cause, for it is the property of the Creator to enter, go out and cause movements in the soul, bringing it all into love of His Divine Majesty. I say without cause: without any previous sense or knowledge of any object through which such consolation would come, through one’s acts of understanding and will.

Third Rule. With cause, as well the good Angel as the bad can console the soul, for contrary ends: the good Angel for the profit of the soul, that it may grow and rise from good to better, and the evil Angel, for the contrary, and later on to draw it to his damnable intention and wickedness.

Fourth Rule. It is proper to the evil Angel, who forms himself under the appearance of an angel of light, to enter with the devout soul and go out with himself: that is to say, to bring good and holy thoughts, conformable to such just soul, and then little by little he aims at coming out drawing the soul to his covert deceits and perverse intentions.

Fifth Rule. We ought to note well the course of the thoughts, and if the beginning, middle and end is all good, inclined to all good, it is a sign of the good Angel; but if in the course of the thoughts which he brings it ends in something bad, of a distracting tendency, or less good than what the soul had previously proposed to do, or if it weakens it or disquiets or disturbs the soul, taking away its peace, tranquility and quiet, which it had before, it is a clear sign that it proceeds from the evil spirit, enemy of our profit and eternal salvation.

Sixth Rule. When the enemy of human nature has been perceived and known by his serpent’s tail and the bad end to which he leads on, it helps the person who was tempted by him, to look immediately at the course of the good thoughts which he brought him at their beginning, and how little by little he aimed at making him descend from the spiritual sweetness and joy in which he was, so far as to bring him to his depraved intention; in order that with this experience, known and noted, the person may be able to guard for the future against his usual deceits.

Seventh Rule. In those who go on from good to better, the good Angel touches such soul sweetly, lightly and gently, like a drop of water which enters into a sponge; and the evil touches it sharply and with noise and disquiet, as when the drop of water falls on the stone.

And the above-said spirits touch in a contrary way those who go on from bad to worse.

The reason of this is that the disposition of the soul is contrary or like to the said Angels. Because, when it is contrary, they enter perceptibly with clatter and noise; and when it is like, they enter with silence as into their own home, through the open door.

Eighth Rule. When the consolation is without cause, although there be no deceit in it, as being of God our Lord alone, as was said; still the spiritual person to whom God gives such consolation, ought, with much vigilance and attention, to look at and distinguish the time itself of such actual consolation from the following, in which the soul remains warm and favored with the favor and remnants of the consolation past; for often in this second time, through one’s own course of habits and the consequences of the concepts and judgments, or through the good spirit or through the bad, he forms various resolutions and opinions which are not given immediately by God our Lord, and therefore they have need to be very well examined before entire credit is given them, or they are put into effect. 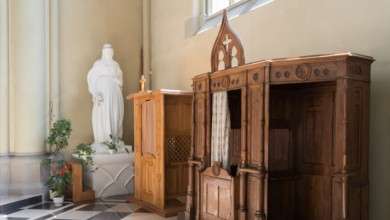 Prayer for this Morning (Tuesday, October 5) 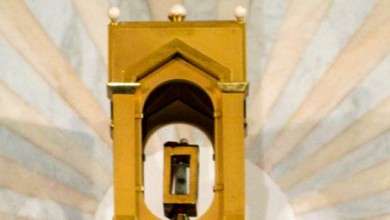 When a woman stole the Eucharist to make a love potion