Participating in what is real

How could we be sharing in the body and blood of Jesus unless his body and blood were present? Paul underscores this truth in the subsequent verses when he draws a parallel between the Eucharist and pagan sacrifices:

[W]hat pagans sacrifice they offer to demons and not to God. I do not want you to be partners with demons…You cannot partake of the table of the Lord and the table of demons (v.20-21).

If communing with demons in pagan sacrifices implies that demons are really present, then communing with the body and blood of Jesus in the Eucharist implies that his body and blood are really present.
Paul’s reference to the “table of the Lord” (v.21) also implies the real presence of Jesus in the Eucharist. If pagans offer a real victim (not a symbol) on the “table of demons,” then how much more do Christians offer a real victim, Jesus, on the “table of the Lord”?

The symbolism of bread

A Protestant may object that Paul refers to the Eucharist as “bread” and therefore can’t mean for the Eucharist literally to be Jesus’ body. But, just because Paul describes the Eucharist according to how it appears to his senses, it doesn’t follow the Eucharist is not Jesus.
Biblical writers commonly refer to things according to their appearance. Scholars call this phenomenological language. For example, angels are referred to as men (see Genesis 18:2, Tobit 5:2-4), and death is referred to as sleep (see Daniel 12:2). When Paul refers to the Eucharist as “bread” he is similarly using phenomenological language.
Furthermore, as the late Jesuit Cornelius à Lapide points out in his commentary on St. Paul’s first letter to the Corinthians, bread is a Hebraism for food:

One should also remember that Catholics don’t deny that the Eucharist has a “symbolic” value. The Catechism of the Catholic Church explains that the sacraments “confer the grace they signify” (CCC 1127). The visible sign of bread signifies Jesus as our true food: “My flesh is food indeed and my blood is drink indeed” (John 6:55). But the bread doesn’t just signify Jesus: it becomes Jesus. Therefore, Paul’s description of the Eucharist as “bread” doesn’t negate Christ’s real presence in the Eucharist.
Furthermore, three times in 1 Corinthians 11:27-30 Paul uses language that shows he believes the Eucharist is literally Jesus and not a mere symbol.

The “guilt of blood”

The first example is Paul’s use of homicidal language in his instruction on receiving the Eucharist worthily:

Whoever, therefore, eats the bread or drinks the cup of the Lord in an unworthy manner will be guilty of profaning the body and blood of the Lord (v.27).

The Greek text—enochos estai tou somatos kai tou haimatos tou kyriou—translates “will be guilty of the body and blood of the Lord.”
The phrase “guilty of blood” is a figure of speech that connotes murder. This language appears in the Old Testament, when God pronounces judgment on the inhabitants of Mount Seir (Edom): “you are guilty of blood, therefore blood shall pursue you” (Ezek. 35:27). In Numbers 35:27 the phrase is also used, but in the negative for those who are not guilty of murder. In the New Testament, Pontius Pilate declares himself “innocent” of Jesus’ blood (Matt. 27:24), meaning he is not guilty of murder. We even use this language today when we say someone has “blood on his hands.”
To incur the “guilt of blood” the victim has to be present. If someone fires a gun at a picture of the president of the United States, that person wouldn’t be guilty of the president’s blood. He would only be attacking a symbol. But if that person assassinates the president, then that person would be guilty of the president’s blood.
Paul says that we’re guilty of Jesus’ blood if we partake of the Eucharist unworthily. The only way to make sense of this belief is that Paul believed the Eucharist is literally Jesus.

Paul taught that eating the Eucharist unworthily has both eternal and temporal consequences, and these constitute our second example.
Regarding the eternal consequences, he writes, “For any one who eats and drinks without discerning the body eats and drinks judgment upon himself” (v.29). Elsewhere Paul uses the Greek word for “judgment,” krima, to connote damnation:

“Having damnation [Greek: krima] because they have made void their first faith” (1 Tim. 5:12 — Douay Rheims).

Regarding the temporal consequences, he writes, “That is why many of you are weak and ill, and some have died” (1 Cor. 11:30).
Why would Paul believe that sickness, death, and damnation result from an unworthy reception of the Eucharist if it were merely a symbol? Such consequences are unintelligible if the Eucharist is a mere symbol.

A peace offering of real flesh

The third example is the parallel Paul draws with the peace offering described in Leviticus:

[T]he person who eats of the flesh of the sacrifice of the LORD’s peace offerings while an uncleanness is on him, that person shall be cut off from his people (Lev. 7:20).

Notice that both Leviticus and Paul speak of eating unworthily and incurring a severe consequence. But in Leviticus one eats the flesh of the offering and in Paul one eats the Eucharist.

These parallels seem to suggest that Paul understands the Eucharist to be a real flesh offering just like the real flesh offering in Leviticus. For Paul, to partake of the Eucharist is to partake of the flesh of the true peace offering—namely, Jesus.
Protestants claim the Catholic Church teaches things not found in the Bible. But, in this case, Paul’s belief that the Eucharist literally is Jesus’ body and blood proves otherwise. Catholics can be assured that if Paul were here today they would see him in the Communion line approaching the altar to receive Jesus in the Eucharist. 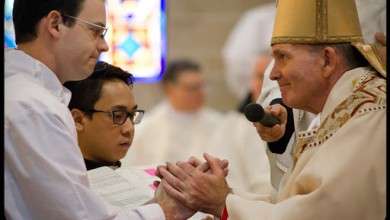 Celibate Priests: Is It Time for a Change? 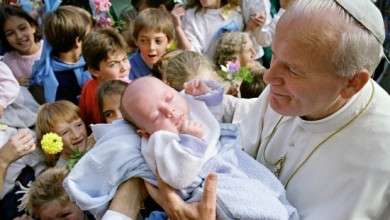 To this Christian woman, headscarves are a religious freedom issue too