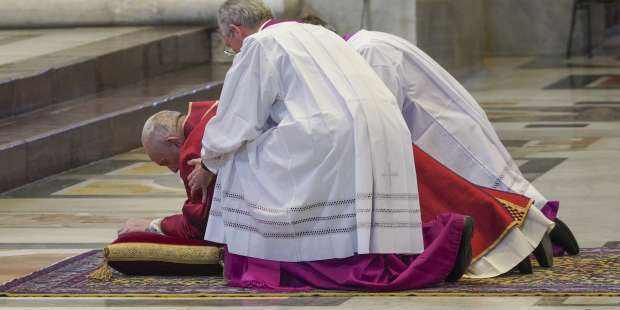 Homily from Celebration of the Lord’s Passion, given by Father Cantalamessa

Catholic Home » Prayers » News » Vatican » Homily from Celebration of the Lord’s Passion, given by Father Cantalamessa

“God participates in our pain to overcome it.”

Here is the English translation of the sermon given by Capuchin Father Raniero Cantalamessa at the Celebration of the Lord’s Passion led by Pope Francis in St. Peter’s Basilica. Father Cantalamessa is the preacher of the pontifical household, and traditionally gives the homily at this liturgy.

“I HAVE PLANS FOR YOUR WELFARE AND NOT FOR WOE”
Sermon for Good Friday 2020 in St. Peter’s Basilica

The Gospel reading we have just listened to is the account of the objectively greatest evil committed on earth. We can look at it from two different angles: either from the front or from the back, that is, either from its causes or from its effects. If we stop at the historical causes of Christ’s death, we get confused and everyone will be tempted to say, as Pilate did, “I am innocent of this man’s blood” (Mt 27:24). The cross is better understood by its effects than by its causes. And what were the effects of Christ’s death? Being justified through faith in him, being reconciled and at peace with God, and being filled with the hope of eternal life! (see Rom 53:1-5).

But there is one effect that the current situation can help us to grasp in particular. The cross of Christ has changed the meaning of pain and human suffering—of every kind of suffering, physical and moral. It is no longer punishment, a curse. It was redeemed at its root when the Son of God took it upon himself. What is the surest proof that the drink someone offers you is not poisoned? It is if that person drinks from the same cup before you do. This is what God has done: on the cross he drank, in front of the whole world, the cup of pain down to its dregs. This is how he showed us it is not poisoned, but that there is a pearl at the bottom of it.

And not only the pain of those who have faith, but of every human pain. He died for all human beings: “And when I am lifted up from the earth,” he said, “I will draw everyone to myself” (Jn 12:32). Everyone, not just some! St. John Paul II wrote from his hospital bed after his attempted assassination, “To suffer means to become particularly susceptible, particularly open to the working of the salvific powers of God, offered to humanity in Christ.”[2] Thanks to the cross of Christ, suffering has also become in its own way a kind of “universal sacrament of salvation” for the human race.

What light does all of this shed on the dramatic situation that humanity is going through now? Here too we need to look at the effects more than at the causes—not just the negative ones we hear about every day in heart-wrenching reports but also the positive ones that only a more careful observation can help us grasp.

The pandemic of Coronavirus has abruptly roused us from the greatest danger individuals and humanity have always been susceptible to: the delusion of omnipotence. A Jewish rabbi has written that we have the opportunity to celebrate a very special paschal exodus this year, that “from the exile of consciousness” [3]. It took merely the smallest and most formless element of nature, a virus, to remind us that we are mortal, that military power and technology are not sufficient to save us. As a psalm in the Bible says, “In his prime, man does not understand. / He is like the beasts—they perish” (Ps 49:21). How true that is!

While he was painting frescoes in St. Paul’s Cathedral in London, the artist James Thornhill became so excited at a certain point about his fresco that he stepped back to see it better and was unaware he was about to fall over the edge of the scaffolding. A horrified assistant understood that crying out to him would have only hastened the disaster. Without thinking twice, he dipped a brush in paint and hurled it at the middle of the fresco. The master, appalled, sprang forward. His work was damaged, but he was saved.

God does this with us sometimes: he disrupts our projects and our calm to save us from the abyss we don’t see. But we need to be careful not to be deceived. God is not the one who hurled the brush at the sparkling fresco of our technological society. God is our ally, not the ally of the virus! He himself says in the Bible, “I have . . . plans for your welfare and not for woe” (Jer 29:11). If these scourges were punishments of God, it would not be explained why they strike equally good and bad, and why the poor usually bear the worst consequences of them. Are they more sinners than others?

The one who cried one day for Lazarus’ death cries today for the scourge that has fallen on humanity. Yes, God “suffers,” like every father and every mother. When we will find out this one day, we will be ashamed of all the accusations we made against him in life. God participates in our pain to overcome it. “Being supremely good – wrote St. Augustine – God would not allow any evil in his works, unless in his omnipotence and goodness, he is able to bring forth good out of evil.”[4]

Did God the Father possibly desire the death of his Son in order to draw good out of it? No, he simply permitted human freedom to take its course, making it serve, however, his own purposes and not those of human beings. This is also the case for natural disasters like earthquakes and plagues. He does not bring them about. He has given nature a kind of freedom as well, qualitatively different of course than that of human beings, but still a form of freedom—freedom to evolve according to its own laws of development. He did not create a world as a programmed clock whose least little movement could be anticipated. It is what some call “chance” but the Bible calls instead “the wisdom of God.”

The other positive fruit of the present health crisis is the feeling of solidarity. When, in the memory of humanity, have the people of all nations ever felt themselves so united, so equal, so less in conflict than at this moment of pain? Never so much as now have we experienced the truth of the words of one of our great poets: “Peace, you peoples! Too deep is the mystery of the prostrate earth.”[5] We have forgotten about building walls. The virus knows no borders. In an instant it has broken down all the barriers and distinctions of race, nation, religion, wealth, and power. We should not revert to that prior time when this moment has passed. As the Holy Father has exhorted us, we should not waste this opportunity. Let us not allow so much pain, so many deaths, and so much heroic engagement on the part of health workers to have been in vain. Returning to the way things were is the “recession” we should fear the most.

They shall beat their swords into plowshares

and their spears into pruning hooks;

One nation shall not raise the sword against another,

This is the moment to put into practice something of the prophecy of Isaiah whose fulfillment humanity has long been waiting for. Let us say “Enough!” to the tragic race toward arms. Say it with all your might, you young people, because it is above all your destiny that is at stake. Let us devote the unlimited resources committed to weapons to the goals that we now realize are most necessary and urgent: health, hygiene, food, the fight against poverty, stewardship of creation. Let us leave to the next generation a world poorer in goods and money, if need be, but richer in its humanity.

Does God perhaps like to be petitioned so that he can grant his benefits? Can our prayer perhaps make God change his plans? No, but there are things that God has decided to grant us as the fruit both of his grace and of our prayer, almost as though sharing with his creatures the credit for the benefit received.[6] God is the one who prompts us to do it: “Seek and you will find,” Jesus said; “knock and the door will be opened to you” (Mt 7:7).

When the Israelites were bitten by poisonous serpents in the desert, God commanded Moses to lift up a serpent of bronze on a pole, and whoever looked at it would not die. Jesus appropriated this symbol to himself when he told Nicodemus, “Just as Moses lifted up the serpent in the desert, so must the Son of Man be lifted up, so that everyone who believes in him may have eternal life” (Jn 3:14-15). We too at this moment have been bitten by an invisible, poisonous “serpent.” Let us gaze upon the one who was “lifted up” for us on the cross. Let us adore him on behalf of ourselves and of the whole human race. The one who looks on him with faith does not die. And if that person dies, it will be to enter eternal life.

“After three days I will rise”, Jesus had foretold (cf. Mt Mt 27:63). We too, after these days that we hope will be short, shall rise and come out of the tombs of our homes. Not however  to return to the former life like Lazarus, but to a new life, like Jesus. A more fraternal, more human, more Christian life!