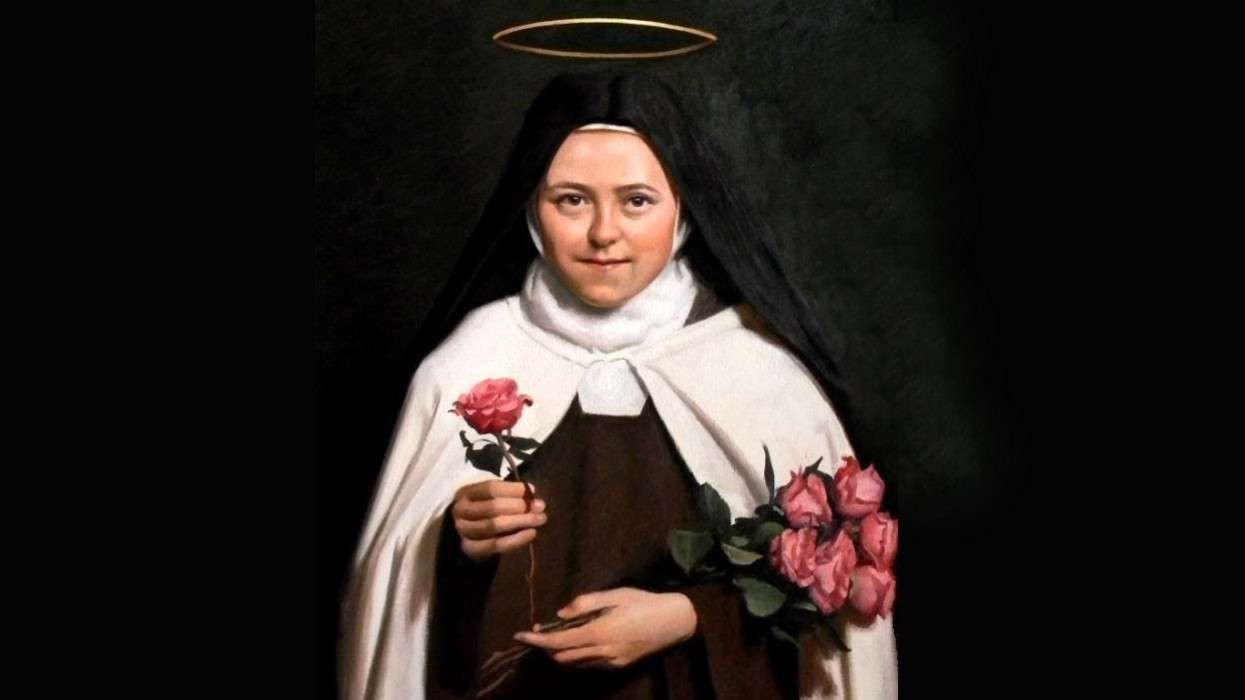 St. Therese of Lisieux’s ‘Christmas conversion’ has deeper meaning, for Therese’s lesson that the grace of God is constantly at work within the nitty-gritty of everyday life is also the lesson at the heart of Christmas itself.

I was an Anglican priest the summer I met St. Therese of Lisieux. I was living in England and had three months free between jobs, so I decided to make a pilgrimage to Jerusalem. I was going to hitchhike and stay in monasteries and religious houses on the way.
The first leg of my journey took me across the English channel to Normandy. After staying with the Benedictines at the monastery of Bec Hellouin, I headed for the town of Lisieux.

As a convert from Evangelical American religion, I didn’t know much about the little saint of Lisieux, and what I did know I didn’t like. Her syrupy sweet spirituality didn’t seem very manly to me. I wasn’t sure what ‘little flowers’ had to do with anything and thought all the little girl talk about ‘Dear papa in heaven’ and ‘being God’s good little girl’ were a bit much.

When I got to Lisieux, I enquired at the guest house called The Hermitage next to Therese’s Carmelite convent. A neat little nun showed me up to my room, and after a simple French supper I wandered around the town for a short time.
As I made my way up to the imposing basilica dedicated to the saint, my distaste for Therese and her cult got worse. The basilica looked big and ugly from the outside, and the road leading up the hill was crowded with souvenir shops with rosaries hanging from the awnings, postcards and images of the saint, pictures of Mary and Jesus with wide eyes, and holy water bottles shaped like Our Lady of Lourdes.

To a tasteful young Anglican priest, it was all rather tacky. I  thought the French ought to know better.
The next day I visited the saint’s childhood home and determined to give the little flower a chance, I bought an English translation of her Story of a Soul. I discovered that her sentimental spirituality had a purpose. It was a reminder of the gospel lesson that all of us, if we were to enter the kingdom, had to become as little children.

I also learned that this little flower was no shrinking violet. She was tough, tougher than I had ever thought it necessary to be in my own feeble attempts at being a Christian disciple. Then I learned that she had a vocation to pray for priests, and I said, “Therese, I know you pray for priests. I am only an Anglican priest, and not a full member of your family, but I hope you will pray for me too as I embark on this pilgrimage.”
After it was over I continued to study the life and teachings of this remarkable saint. As I eventually came into full communion with the Catholic Church I was sure it was not only her life, example and teachings, but also her prayers which assisted my own journey into the Catholic faith.

One of the convincing stories about Therese’s life was her childhood conversion at the age of fourteen. As an Evangelical I was brought up with the idea of the importance of personal conversion, and I myself first ‘accepted Jesus into my heart’ at the age of five. Therese’s childhood conversion was therefore fascinating, and I wanted to know more.
It happened at Christmas time in 1886. In France, young children left their shoes by the hearth at Christmas, for their parents to fill them with gifts. Therese should have outgrown this tradition by the age of fourteen, but Therese was the spoiled baby of a family who had lost their mother to cancer. Her elder sisters continued to leave presents in Therese’s shoes at Christmas, and Therese was still looking forward to the Christmas event.
As she climbed the stairs with her older sister Celine, Therese heard her beloved father say about the ceremony of shoes and gifts, “Thank goodness that’s the last time we shall have this kind of thing!”

Therese was hyper sensitive, and had suffered from a terrible nervous illness only a few years before. She froze, for a moment with horrified hurt feelings. Celine looked at her helplessly, and knew that Therese would probably be heartbroken over her father’s comments.
Therese remained calm. Something had happened. She said Jesus had come into her heart and converted her, taking her selfish immaturity and banishing it forever. She forgot the crying, walked downstairs, and exclaimed over the gifts in the shoes, as if she had never heard a word her father said.
Despite great opposition Therese entered the convent the next year, and began the rapid spiritual growth for which she is famous.

Therese always referred to this as her “Christmas Conversion.” To one unfamiliar with Therese, it may seem an insignificant event. “So a fourteen year old girl finally realized she was being a baby and ‘got over it.’ What’s the big deal?”
Therese would probably have agreed that the whole incident seemed small. For her, that was the big deal. All the events recounted in her life were small. They were middle class, and seemingly insignificant.
They were a ‘big deal’ because Therese realized God himself was working his miracle of grace through the little everyday events of a very ordinary life. Therese recognized that in the midst of a fourteen year old girl making a step toward maturity, God’s grace was thundering through.

This enlightenment, and the spiritual theology that flowed from it, transformed the Catholic Church and brought Therese the status not only of being the greatest saint of her time, but eventually being named a Doctor of the Church.
If God was working out his purpose in the midst of an ordinary girl’s family life and growth, then God’s work was just as constant and ubiquitous in the lives of all those who simply trusted him and obeyed the promptings of his love.
That Therese’s conversion was a ‘Christmas conversion’ is not simply a sentimental touch weaving in Christmas and presents and little children. That it was a ‘Christmas conversion’ has deeper meaning, for Therese’s lesson that the grace of God is constantly at work within the nitty-gritty of everyday life is the lesson at the heart of Christmas itself.

The poet Henry Vaughn wrote, “Here in dust and dirt, O here, the lilies of his Love appear.” The realization that God is working his purpose out within the dust and dirt of ordinary life is the message of Therese.
It is also the message at the heart of the Christmas story, for there in the ordinary, warm earthiness of a stable God is born. There within the most ordinary event-a mother and a birth-new life comes to earth.