The Roman Rite has very specific guidelines about the process.

Ever since the Last Supper the Catholic Church has celebrated a Eucharistic feast that features bread and wine that are miraculously changed into the body, blood, soul and divinity of Jesus Christ.

However, the Catholic Church believes it is not just any bread or wine that can be used and has specific guidelines that govern its creation.

In the Roman Rite (the Eastern Rite will be covered in a separate article), the Code of Canon Law lays out the basics of the bread and wine making process.

Can. 924 §1. The most holy eucharistic sacrifice must be offered with bread and with wine in which a little water must be mixed.

§2. The bread must be only wheat and recently made so that there is no danger of spoiling.

§3. The wine must be natural from the fruit of the vine and not spoiled.

Can. 926 According to the ancient tradition of the Latin Church, the priest is to use unleavened bread in the eucharistic celebration whenever he offers it.

The instruction Redemptionis Sacramentum adds a few other qualifications.

The wine that is used in the most sacred celebration of the Eucharistic Sacrifice must be natural, from the fruit of the grape, pure and incorrupt, not mixed with other substances.

There are some exceptions to the rules above, including low-gluten hosts and a form of wine permitted for those who should not consume alcohol. In general, however, these basic rules govern what type of bread and wine can be used at Mass.

Many companies specialize in creating this type of bread, including many communities of nuns. For example, the Passionist community in Erlanger, Kentucky bakes bread each day that is used by parishes across the United States. In an article for Loyola Press, the detailed process is explained.

They start their workday by mixing water and flour to make paste. Back in 1951 when the monastery began making altar bread, they measured flour and water with measuring cups. Now that the business has expanded to 100 parishes nationwide, they have to measure with scales.

The paste is ladled onto “bakers,” a machine similar to a waffle iron, except that instead of a grid, the Chi-Rho symbol is embossed onto the bread. Once the 14-inch plates are cooked, they’re stacked and stored overnight in a humidifier so they can be cut without breaking the next day. The moistened plates are assembled in stacks of 72 and cut into small and medium-sized wafers. Once cut, the wafers dry out in dish pans, to be packaged later by 91-year old Sister Paul for distribution.

It is generally believed that Jesus used unleavened bread at the Last Supper and according to some scholars, “Their best-educated guess is that the wine would have been similar to modern-day Amarone, an Italian red wine made from grapes that have been dried before fermentation.” For these and other spiritual reasons the Roman Rite abides by the simplest ingredients for the matter that becomes the body and blood of Jesus Christ.

What if you're having trouble getting to confession because of your work schedule? 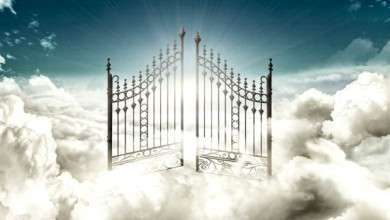 Why is heaven pictured as a big fluffy city in the clouds?