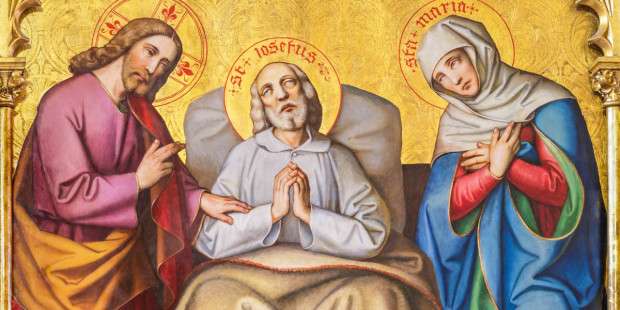 His departure is known as the perfect example of a “happy death.”

Little is known factually concerning the life of St. Joseph, foster father of Jesus. He is mentioned only a few times in the Gospels, and never says a word.

However, most biblical scholars believe Joseph died prior to Jesus’ crucifixion. This is mainly due to the fact that Joseph was not present at the crucifixion and in the Gospel of John, Jesus entrusts his mother to someone outside the family (cf. John 19:27).

Keeping in mind this historical scenario, many traditions hold that Joseph died in the arms or presence of Jesus and Mary. It’s a beautiful image, one that has led the Church to proclaim Joseph the patron saint of a “happy death.”

There are numerous accounts of this moment, but one that is particularly touching is from the writings of Venerable Mother Mary of Jesus of Agreda (aka the bi-locating nun). She wrote about the episode in “Mystical City of God,” and it is recorded as a private revelation.

Then this man of God, turning toward Christ, our Lord, in profoundest reverence, wished to kneel before Him. But the sweetest Jesus, coming near, received him in his arms, where, reclining his head upon them, Joseph said: “My highest Lord and God, Son of the eternal Father, Creator and Redeemer of the World, give thy blessing to thy servant and the works of thy hand; pardon, O most merciful King, the faults which I have committed in thy service and intercourse. I extol and magnify Thee and render eternal and heartfelt thanks to Thee for having, in thy ineffable condescension, chosen me to be the spouse of thy true Mother; let thy greatness and glory be my thanksgiving for all eternity.”

The Redeemer of the world gave him his benediction, saying: “My father, rest in peace and in the grace of my eternal Father and mine; and to the Prophets and Saints, who await thee in limbo, bring the joyful news of the approach of their redemption.” ‘

At these words of Jesus, and reclining in his arms, the most fortunate Saint Joseph expired and the Lord himself closed his eyes.

Whatever did happen, Joseph must have died a “happy death” surrounded by the most loving wife and son in the whole universe.

Here is a short prayer to St. Joseph, asking him to intercede for us that our death may be “happy” as well.

O BLESSED JOSEPH, who yielded up thy last breath in the arms
of Jesus and Mary, obtain for me this grace, O holy Joseph,
that I may breathe forth my soul in praise, saying in spirit,
if I am unable to do so in words:

“Jesus, Mary and Joseph, I give Thee my heart and my soul.”
Amen.