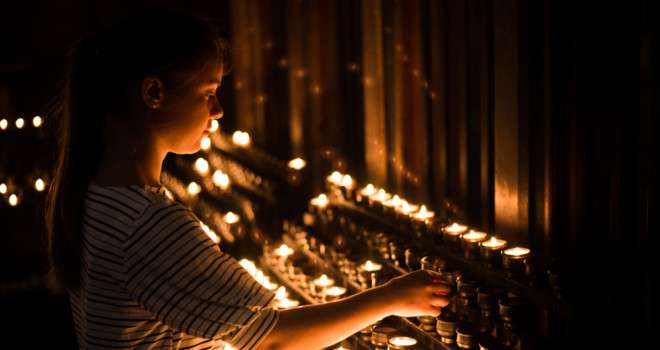 A few months ago, my daughter decided that her vocation was to be a “girl bishop.” To two parents who work for the Church, this was amusing (but not concerning, given our mutual love for catechesis and theological discussions). Her dad works at a seminary, and this little girl is surrounded by spiritual fathers and brothers. We have had the talk about spiritual fatherhood before (emphasis on fatherhood), but still she persisted.

Not long after making this declaration, she was watching a livestream of the enthronement of an abbess. In case you’ve never seen it, when an abbess is enthroned, she is led to a literal “throne” (which looks just like an episcopal chair that a bishop would sit in) by two bishops, crowned with a crown of flowers, and given a crosier (just like a bishop). My daughter watched this with fascination.

I told her, “Look at that! The bishops are leading her. She gets to wear a flower crown! Wouldn’t you rather be an abbess?”

She initially looked interested. “Yeah, I want to be that!” She then paused, and eventually said, “But I still want to be a girl bishop.”

Fast forward to the 4th of July, and I took my three young daughters to a parade near our house. Halfway through the parade, there was a float for a protestant church, with a woman wearing clerics and a handmade chasuble. My daughter looked up at me with utter confusion, “Mommy…is that a girl priest?”

I’m guessing that I’m not the only faithful Catholic mother who wants her daughters to know that they have a place in the Church. So, if you have found yourself in my shoes, here’s a way to explain the all-male priesthood to your daughters (and to help them understand the gift of women in the Church).

The Crown of Creation

To understand how important woman is in God’s plan, we have to go back to Eden. When God had created everything, he found it “good.” The only time that God does not find it good is when Adam is all alone. Something is missing. And so he creates Eve.

Eve is the crown of creation. She is the finale, the ending to the story of creation. Adam exclaims with joy when he sees her. And God finds her “very good.” Without woman, man is incomplete. The two need one another.

On a spiritual level, women complete men. This is true in a very real way in marriage, when two become physically one. But it is also true in a spiritual sense. We can look to the lives of saints — Francis and Clare, Benedict and Scholastica — and to the life of Christ, and we see the gift that holy female friendship is to holy men. There is a complementarity between the two, and both are necessary. God declares creation incomplete without women. Likewise, the Church is incomplete without them.

The Queen of Heaven and Earth

My middle daughter is named after the Blessed Mother, and we joke that she is a Mary evangelist. (She taught her younger sister to say “Mary” and for a while, the baby would only refer to Jesus as “Mar-ee!”) So, when explaining to her the role of women in the Church, I knew that it would be important to talk to her about Mary.

The greatest saint who ever lived was Mary. She is the Queen of All Saints, the Queen of Heaven and Earth. Who does the Church teach is the most important human being, after Christ? It’s Mary. Mary is essential to the Church, so much so that Christ gave her to the Church, at the foot of the cross.

Priests are partakers in the one priesthood of Christ. Likewise, to understand the role of women, it helps to look to the new Eve- Mary, the Blessed Mother.

I’m passionate about spiritual maternity to priests and seminarians.

Because they visit their dad at work at least once a week, my daughters have gotten to know and befriend many priests and seminarians. I’ve encouraged them to adopt some of these guys as their “spiritual sons.” (My oldest adopted a newly-ordained priest and thus he and I affectionately call her his “littlest spiritual mother.”)

Here’s the thing — we need priests. We desperately need strong spiritual fathers, willing to lay down their lives for the Church. But these men desperately need prayers. They need spiritual mothers. I can speak firsthand, from my friendships with seminarians, that spiritual attacks and suffering is very real in the life of these men. They can’t live out this vocation without the maternity of Mary.

Mary, as the mother of the Christ, the Great High Priest, is a mother to all priests. There is a complementarity between the two, and the Church cannot possibly have one without the other. Priests need spiritual mothers. And Mary invites all women to partake in her spiritual maternity to priests.

Of course, underlying all of this is a misunderstanding of the priesthood. It is not meant to be a role of power, but of sacrificial love. Women don’t lose power by not being priests. However, both roles are important and both roles fulfill a need in the Church.

So now, instead of being a “girl bishop” my little Marian daughter has decided to fill a different role — one of spiritual motherhood to seminarians, priests, and bishops. Of course, not one to do things by halves, she has declared, “I’m a spiritual mother to him, and him, and him…to all the priests and seminarians! I have…like…a thousand million spiritual sons!”