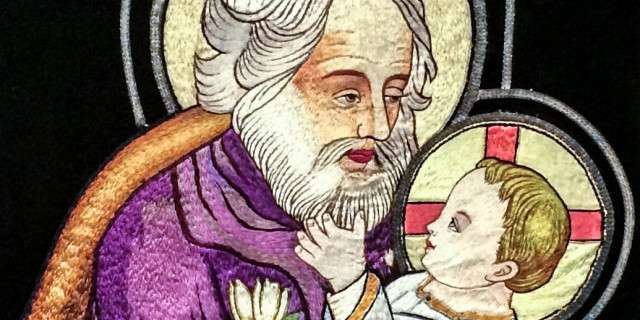 Was he an old widower or a strapping young man?

We don’t hear much about St. Joseph in the Bible. He is simply described as the “husband of Mary,” a “carpenter,” and a “just man” in the Gospel accounts. Neither his age nor his death is ever mentioned in Scripture.

However, various traditions help shed some light on the question, and offer possible scenarios to consider.

A very common tradition in the Orthodox Church is that Joseph was an old man when he married the Virgin Mary. Before taking Mary into his home, Joseph’s previous wife (with whom he had had several children) died. This has led some to claim that these children were the “brothers” of Jesus that are mentioned in the Gospels.

A 6th century text called The History of Joseph the Carpenter is at the heart of this tradition and states that Joseph was an old man, but youthful in vigor.

At length, by increasing years, the old man arrived at a very advanced age. He did not, however, labor under any bodily weakness, nor had his sight failed, nor had any tooth perished from his mouth. In mind also, for the whole time of his life, he never wandered; but like a boy he always in his business displayed youthful vigor, and his limbs remained unimpaired, and free from all pain. His life, then, in all, amounted to one hundred and eleven years, his old age being prolonged to the utmost limit.

On the other hand many biblical scholars and historians believe Joseph was a young man, possibly even a teenager. The International Marian Research Institute states, “We believe that Mary and Joseph were both in their teens when Jesus was born, around sixteen and eighteen respectively. This was the norm for Jewish newlyweds at that time.”

Venerable Fulton Sheen shares a similar sentiment in “The World’s First Love”, “Joseph was probably a young man, strong, virile, athletic, handsome, chaste, and disciplined, the kind of man one sees … working at a carpenter’s bench … He was not in the evening of life, but in its morning, bubbling over with energy, strength, and controlled passion.”

This theory takes into account the long journeys that the Holy Family took around Jesus’ birth. The first from Nazareth to Bethlehem and the second when they fled into Egypt. It is hard to imagine an elderly Joseph taking care of Mary and Jesus as they go into a foreign country.

Whatever the truth is, Joseph was a “just man” who did all he could to protect and provide for Mary and Jesus. He looked upon them with a tender heart and loved them both with a deep and abiding love.