In the pantheon of great women in Church history, pride of place should be accorded the young mystic from Siena, St. Catherine.
Born in 1347 to a humble wool-dyer, Catherine became one the most influential persons of fourteenth-century Christendom. After she became a Dominican tertiary at the age of nineteen she embarked on a life of intense spiritual practices. Her reputation for great holiness spread quickly, and she found herself answering letters from some of Europe’s most powerful people, seeking her advice on matters spiritual as well as political and even military (she was a supporter of the Crusading movement).
But the topic which most concerned her was the return of the papacy from Avignon, France, where popes had lived since 1309. Catherine took up the mantle of encouraging the pope to return home to Rome after the death of St. Bridget of Sweden (1303–1373), who first exhorted the papal return in 1350 and spent twenty years trying to convince popes to move back to the Eternal City.
Late thirteenth-century Christendom had witnessed a titanic struggle of egos and wills between King Philip IV, “the Fair,” of France (r. 1285–1314) and Pope Boniface VIII (r. 1294–1303). Philip and the Boniface clashed over the authority of the pope in France, primarily especially over the raising and spending of clerical taxes. Philip used money raised for Church expenses to finance his personal wars and Boniface responded with a series of biting pronouncements, including a papal bull entitled Ausculta fili, or “Listen, son!” Philip responded by arresting the papal legate and Boniface threatened the king with excommunication.
Eventually, Philip’s chief advisor, William of Nogaret, hatched a plan to kidnap Boniface and install a new pope favorable to Philip. William hired mercenaries who attacked and held Boniface prisoner in the city of Anagni. Townspeople came to the pope’s rescue and freed him, but the rough treatment took a toll on the pontiff, who died a month later.
The death of Boniface VIII provided Philip IV with the opportunity to influence the papal election of a favorable candidate. Instead, though, the cardinals elected the holy and peaceful Bl. Benedict XI (r. 1303–1304), who worked tirelessly to repair Franco-papal relations until his reign was cut short with his unexpected death after only eight months (there is some speculation he was poisoned on the orders of William of Nogaret). Philip desired that the next papal election would produce a pontiff who could be easily manipulated.
The cardinals responded and elected a Frenchmen, Archbishop Bertrand de Got of Bordeaux, who took the name Clement V (r. 1305–1314). Philip presented the new pope with a list of demands that ranged from the bizarre—putting the dead Boniface VIII on trial—to the shocking: moving the papal residence to France. Clement V agreed to leave Rome and move to France, which he did in 1309. He established the papal residence in the town of Avignon, which was papal territory that had been gifted by King St. Louis IX (r. 1226–1270); so, technically, Clement V just moved the papal residence from one papal territory to another. Practically, though, the relocation was motivated by politics and the influence of the French king.
Christendom was shocked to see the pope engaged in the ecclesiastical abuse of absenteeism (a bishop not residing in his diocese). The popes lived in Avignon for the next seventy years, and over that time they came to be seen as nothing more than puppets of the French king (although history tells us that most were not). Respect for the papacy waned throughout the Church and reached a critical low point by the time Catherine entered the picture.
The popes had lived in France for 67 years, all of Catherine of Siena’s life and then some, when she decided to visit Pope Gregory XI (r. 1370–1378) in the summer of 1376. Catherine spent three months in Avignon tirelessly working to realize her dream of the pope’s returning to Rome. Gregory resisted and demurred, but she persisted, and even startled him by telling him that she knew about the private vow Gregory hademade before God that if elected pope he would return the papal residence to Rome. Finally, the humble yet firm saint from Siena convinced him to fulfill his vow, and Gregory made plans to travel to Rome.
Successful in her mission, Catherine left Avignon and returned to France. Later that fall she received reports that Gregory, influenced by the French cardinals, was having second thoughts. Catherine (who, though a Doctor of the Church, was illiterate) dictated letters urging the pope to fulfill his promise and make the hard decision: “I beg of you, on behalf of Christ crucified, that you be not a timorous child but manly. Open your mouth and swallow down the bitter for the sweet.”[1]
She also encouraged him to cast fear aside and ignore the advice of his cardinals:

Gregory XI listened to the pleadings and prayers of St. Catherine of Siena and returned the papacy to Rome on January 17, 1377. The scandal and shame of the Avignon papacy was at an end. The humble yet powerful mystic from Siena died in 1380, was canonized in 1461 and declared a Doctor of the Church in 1970.
By  Steve Weidenkopf 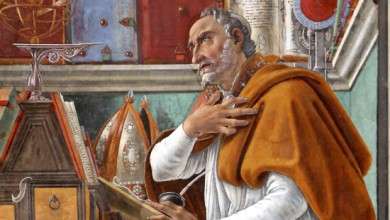 Being dust that is loved … Reflecting with Pope Francis and Augustine