“As the people picked up the song, I heard the truth of its words as if for the first time: Jesus Christ is risen today, alleluia!”

On Easter Sunday, after celebrating a beautiful liturgy with the sisters in the monastery chapel, I restored the Eucharist to its customary place in the sisters’ perpetual adoration monstrance and breathed a sigh of relief: after the long, hidden silence of Good Friday and Holy Saturday, the radiant splendor of our Eucharistic Lord was shining visibly again.

Yet all around us something of Holy Saturday remained, in that the requirements of coronavirus quarantine meant that the public side of the church was empty and its doors locked.

But on this day of all days, the Lord had made sure that the people of our little town could see with their own eyes that He is risen indeed.

Quickly changing into a cope, stole, and humeral veil, I placed a consecrated Host in a smaller monstrance that Sr. Mary Ann had prepared, and got ready to leave. We had told a handful of people that there would be a small, one-man “social-distance” Eucharistic procession after Mass that day, inviting people to wait in their homes and cars to see the Lord. I didn’t expect many people would respond. As I shifted to a more comfortable hold on the monstrance, I ran through the route one more time in my mind, expecting to have a long, silent walk, alone with Christ on empty country roads. I stepped out of the sacristy door into the sunlight.

As I emerged from the hedges, unexpected voices broke into shouts. “There he is,” they cried, “Look! I see him!” A dog barked enthusiastically; children’s voices shouted in excitement.

There in front of the monastery were dozens of people: families with children dressed in their Easter best, elderly couples, individuals scattered across the road. Many wore masks; most had just emerged from the cars they had been quarantining themselves in while they waited, and unnaturally wide spaces separated everyone. Yet at the moment when I stood with the Eucharist on the top of the chapel steps, those isolated groups of people kneeling in adoration became powerfully, palpably united.

I started a verse of “Jesus Christ Is Risen Today,” which was still ringing in my ears from the recessional at Easter Mass, and as the people picked up the song, I heard the truth of its words as if for the first time: Jesus Christ is risen today, alleluia, our triumphant holy day, alleluia!

After a moment of silence, I set off down the road to begin what I expected to be the part of the journey where I was to be alone with Jesus. But along the side of the road and on the hill above the road there were more cars, more families, more people who had been waiting for the Lord to pass by. Still more: after a few minutes I realized that what I was hearing behind me, stretching far out into the distance, was the sound of people walking in silence.

Taking a chance, I started a Rosary, wondering if there were enough people in earshot to make it work. Dozens of enthusiastic voices from near and far took up the prayer. My one-man walk with the Eucharist had turned into a full-fledged procession.

As we walked down the road, more people waited at street corners, by their mailboxes, on the front lawns. Occasional cars passed, most slowing to a crawl as they took in the scene. Some drivers crossed themselves, others looked bemused but pleased. When we reached the highway, I turned around and started back to the monastery, passing through the groups of joyful families, young people with smartphones recording the event, elderly people braving the unaccustomed sun and the distance. Returning down the same road meant that people who had seen the crowd straggle by the first time now had time to leave their homes and wait for the Lord to pass by again. Some looked on with casual interest; many knelt down in their yards to pray.

Back at the monastery, even more people waited by their cars, dotting the area and waiting for their turn with the Eucharist. I stood on the steps again and preached an impromptu homily to the scattered crowd, about the road to Emmaus, about the disciples’ fear as they waited in locked rooms, about Christ’s shattering the prison bars of death and appearing with joy in the midst of them.

I told them that we were not just making the best of a bad thing on this unusual coronavirus Easter; just as the disciples had felt their hearts burning within them as He walked with them on the road, so Christ was giving us the chance to burn with desire for him, to receive all the graces of Easter by receiving the gift of desire for the Eucharist and the presence of Christ. At the end of my homily, I heard something Catholic priests rarely hear: “Amen!” shouted a host of voices. “Alleluia!” cried others. I then invited anyone who wished to join me for the second, longer leg of the journey, and set off up the road.

As I started up the hill past the monastery, I heard excited sounds from behind the monastery fence: the sisters, too, were joining in our procession in their own way! I called out to the people, saying that we would pray a litany of the saints for an end to the pandemic and for protection from all danger.

As I started to sing the litany, I discovered to my embarrassment that it is rather more difficult than I had anticipated to carry a monstrance, watch where you’re walking, and come up with a list of saints at the same time. I ran through the saints that came to mind: the first Eucharistic prayer was a reliable database of saints, as were the Western and Eastern doctors, but after the first couple dozen, I found myself straying into ever-stranger territory: I don’t know how often St. Irmingard gets mentioned in litanies outside of Bavaria, but she made an appearance on a rural Connecticut road this Easter.

At last I hit upon the idea of mining our host of Dominican saints, which was a stroke of luck, but there too my mind insisted on playing its own games. St. Thomas Aquinas and St. Albert the Great somehow never came on the scene, but Bl. Anthony Neyrot and Bl. Lawrence of Ripafratta were happy to take their place. I wrapped up the litany with a series of extemporaneous prayers for deliverance from the virus, and concluded with a final, fervent petition to St. Corona.

As the miles wore on, the same beautiful cycle of random encounters continued to play out: people out for a Sunday stroll stopping to pray or joining the procession for a while, families and individuals waiting on their lawns, cars either zooming by or reverently pausing before continuing on their way. Walking up a long stretch of hill, way in the back behind me I heard a group of voices begin the O Sanctissima, adding their own hymn of praise to the beauty of the day. At the end of the long road, as we were preparing to turn around, a food delivery car heading towards us suddenly swerved into the middle of the road and stopped dead, looking as shocked as it’s possible for a van to look. As I circled around behind the truck, heading homewards on the other side of the road, I saw that the driver had called someone on his phone, holding out the camera so she could join in the procession remotely from wherever she found herself. I started the Divine Mercy chaplet, and the driver only continued on his way once the last scattered members of the procession had passed him, lifting up their voices in prayer.

On the road back, one moment stands out in particular: walking down the hill, I saw an old man with a mask on, standing by his mailbox, down the long stretch of the drive from his house. He moved with difficulty, and clearly standing was itself a labor, yet there he was, and there he had been, presumably since he had seen us pass by the first time. Despite whatever physical struggles he faced, he had waited and stood in the sun for as long as it took for the procession to come by again, so that he could have one moment with the Eucharist. I turned the monstrance to him as I passed by, and he took a long, slow, solemn bow, easing himself up again with labored breathing, strong emotion in his eyes. It was for me a living expression of the line from the psalms we pray every day through the Easter Octave: “This is the day the LORD has made; let us rejoice in it and be glad” (Ps 118:24).

Returning at last to the monastery a full two hours after I first stepped out of the sacristy, I gave one last impromptu homily to the people, reminding them that they had received the same gift that God gave Mary Magdalene. They had seen the Risen Lord, so they had the same message to share with their loved ones: go to Galilee, go back to your lives, go with joy even into the strange and uncomfortable world of isolation and quarantine. There, you are not alone. There, you will see the Lord. Jesus Christ is risen today, and his splendor cannot be hidden.

Pope to the newly ordained bishops: The episcopate is a service, not an honour 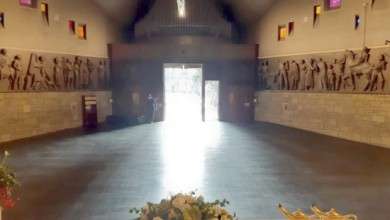 A synod conversation with Catholic Africa’s lion in winter