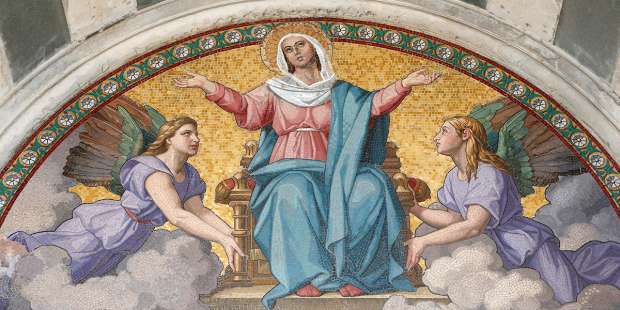 The Virgin Mary is first of all a mother, and a very powerful spiritual mother! She is fully united with her Son in Heaven and seeks to use all of her power to protect her children, who are invited to turn to her in their time of need.

St. Louis de Montfort, an 18th-century priest who dedicated his whole life to leading souls to Jesus through Mary, wrote about the protection she offers in his book entitled True Devotion to Mary. He compares her to a hen who gathers her brood under her wings, saving them from outside enemies.

Mary, the beloved Mother of chosen souls, shelters them under her protecting wings as a hen does her chicks. She speaks to them, coming down to their level and accommodating herself to all their weaknesses. To ensure their safety from the hawk and vulture, she becomes their escort, surrounding them as an army in battle array.

This she does out of the pure love she has for us, especially those who are daily devoted to her.

Montfort continues his reflection, thinking about the magnitude of her protecting help.

Could anyone surrounded by a well-ordered army of say a hundred thousand men fear his enemies? No, and still less would a faithful servant of Mary, protected on all sides by her imperial forces, fear his enemy. This powerful Queen of heaven would sooner dispatch millions of angels to help one of her servants than have it said that a single faithful and trusting servant of hers had fallen victim to the malice, number, and power of his enemies.

This simple truth has been confirmed by many throughout the years, especially exorcists.

Famed exorcist Fr. Gabriele Amorth discovered this reality in his dialogues with the devil, where the devil said to him, “I am more afraid when you say the Madonna’s name, because I am more humiliated by being beaten by a simple creature, than by Him.”

Pope Francis related similar words in a homily at St. Mary Major, “Where the Madonna is at home the devil does not enter; where there is the Mother, disturbance does not prevail, fear does not win.”

Let us stay underneath the wings of the Blessed Mother and let her safely guide us to eternal life!