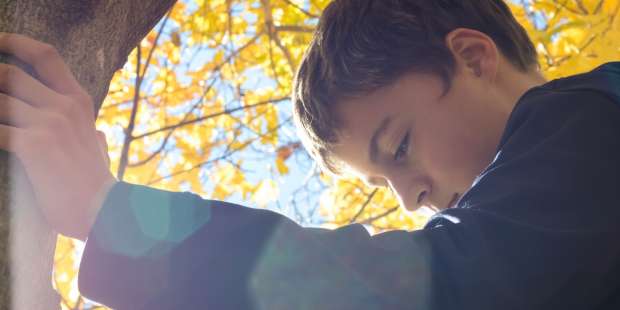 “As I waited with Jack’s body, I was shocked that all the birds were singing in the darkness. I’ll never forget the sound of it.”

I sat at a small table in the back of the bookstore, looking out at the faces of friends and strangers there to support me in the tumultuous and unwanted journey I’d been on for the past three years. The place was packed.

Three years earlier, I had been a suburban mom, raising my two children, Jack and Margaret, in  the suburbs of Virginia, with my husband Tim. We sought a quiet life for our family of four, and our days centered around church, school, baseball, soccer, and our chocolate lab, Shadow. Drawing a crowd was certainly never on my radar.

All that changed when I lost my 12-year-old son when he fell into a raging, rain-swollen creek while playing with friends in a neighbor’s backyard. It took hours to locate his body. Since Jack’s death, I had tried my best to choose to live with joy, but many days still felt joyless. Life without my handsome, gentle son seemed like an impossible task, but I clung to his favorite Bible verse, Luke 1:37, “For nothing is impossible with God.” Nothing? Nothing. Not even surviving the loss of a child. I held those words close. I just kept showing up, gripping tightly to hope, and trusting that somehow life could seem worth living again. Despite the intense pain, I believed that the God I followed wouldn’t leave me alone in my grief. Plus, I hoped that my story, of learning to survive, and possibly even thrive after life’s greatest loss, could be a balm to others.

Just days after the accident I’d started sharing on my blog the raw reality of losing a child, sparking important conversations about grief.

Eventually, I wrote a book that was published by a major publisher. The title, Rare Bird: A Memoir of Loss and Love, was a nod to our son’s charming, quirky individuality, his first word—bird—and the many strange and wonder-filled ways God used birds to comfort us after Jack’s sudden death. Blue jays acting strangely. Bald eagles in unlikely places. Songs about birds. Photos of birds. Even a bird flying into our house!

Writing gave me new opportunities to try to salvage something from the ashes of our family’s story and to reach out to people. I began meeting one on one with bereaved parents. I spoke to churches about how to support grieving friends. I traveled to college campuses, sharing how to be more open when dealing with an uncomfortable topic that will affect everyone at some point—grief and loss. It felt promising to see something positive be born out of such a dark place—the chance to use my writing and speaking to help others even as I was adapting and healing.

Not that I didn’t still have regrets. I regretted letting my children play in the rain with their friends the day Jack died. Why didn’t I keep them inside? I regretted the many small factors that led to such perilous consequences, such as my neighbors and me being oblivious when the weather quickly turned dangerous. And I regretted I wasn’t there when rescue workers found Jack’s body trapped under debris far, far down the creek. I was with Jack for his very first moments on earth, but not for his last.

The police told me it was important that I stay in my house while they searched, just in case Jack came walking in. Were they just trying to keep me out of the way? When I found out he had died, picturing his small body, cold, wet and alone, was almost too much for me to bear. I knew there were professionals around him, doing their jobs, but it hurt that there wasn’t someone there who loved him.

Now, at my first book signing, exactly three years after losing Jack, even as I felt the warmth and love in the bookstore, heartbreak threatened to bubble to the surface and take over. Grievers grow to understand that bursts of pain can come at any moment, and to just let it flow over them rather than fight it. Real emotion is nothing to be ashamed of or hide from.

After I read a few passages from Rare Bird and answered questions, I signed books at the front of the store. There were hugs, photos, and laughter. Former students from when I taught high school stood in line, all grown up. People opened up about themselves while I signed their books, sharing their own losses, and how my writing had helped them.

At the end of the line was a young woman. She seemed nervous and her hands were shaking, so I reached out mine to cradle hers, ready to hear her story. I assumed she was a young mother and that reading about the death of a child had been especially difficult for her.

She introduced herself as Carrie, and I wasn’t prepared for her what she said next: “I’m working on my writing degree. When I saw your name and picture advertised yesterday, I knew I needed to come tonight.” She explained that she hadn’t read my blog or my book, but had pieced together who I was from the short bio she’d read in a flyer she’d happened upon at her university.

She continued, “I think I was meant to see that flyer. I’m an EMT from the rescue squad who came to try to save Jack. I was there when they found him in the creek. I just want you to know I stayed by his side until they took him away.”

I was struck by how brave and generous it was for her to revisit one of the most traumatic moments of her young life in order to let a hurting mom know that her son was not left alone. I couldn’t be with Jack’s body when he was found, but she could, and she did. This comforted me.

She continued, eyes welling, “I don’t consider myself a religious person, and I’ve never believed in signs, but I also need to tell you that as I waited with Jack’s body until they took him away, I was shocked that all the birds were singing in the darkness. I’ll never forget the sound of it.”

Jack’s death affected many people: his friends, the rescuers, even strangers who read about him years later. The impact on our family will continue for us as long as we live.

But so will reminders of God’s faithfulness in the midst of suffering, and the comfort He brings, through Bible verses like Luke 1:37, through people like Carrie, and even birds singing out in the darkness. For even if no one had been there where Jack’s body lay, he had never really been alone.