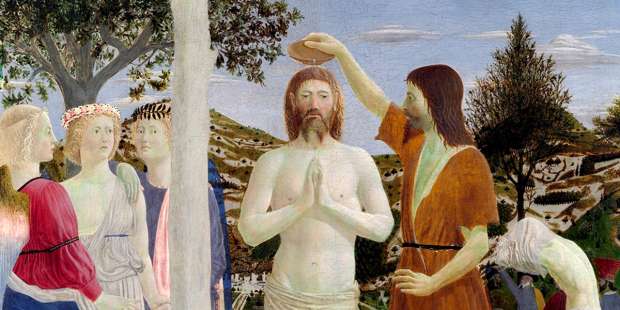 How was baptism practiced in the early Church?

Home » Q&A » How was baptism practiced in the early Church?

A brief step-by-step guide to the baptismal rite of the early Christians.

Before Jesus ascended into Heaven, he commanded the disciples to “Go, therefore, and make disciples of all nations, baptizing them in the name of the Father and of the Son and of the Holy Spirit” (Matthew 28:19).

In the first few centuries of the Church, this was conducted in a manner following the example of Jesus. He was baptized in the Jordan river by St. John the Baptist and as a result, Christians preferred baptism in places with readily available flowing water.

The Didache, an anonymous Christian treatise that dates between the years 65 and 80, gives specific instructions as to where baptism should take place.

And concerning baptism, baptize this way: Having first said all these things, baptize into the name of the Father, and of the Son, and of the Holy Spirit, in living water. But if you have not living water, baptize into other water; and if you can not in cold, in warm. But if you have not either, pour out water thrice upon the head into the name of Father and Son and Holy Spirit. But before the baptism let the baptizer fast, and the baptized, and whatever others can; but you shall order the baptized to fast one or two days before.

This early instruction explains that baptism could be administered through full immersion in a river or other “living water,” or it could be done by simply pouring water three times over the head. Both forms were valid and used depending on the situation. Fasting, as can be seen in the quote above, was also a vital part of the preparation for baptism and included both the “baptizer” (i.e. the priest or deacon) and the one to be “baptized.”

An ancient text from the 3rd century called the Apostolic Tradition, commonly attributed to Hippolytus of Rome, explains how the rite of baptism was also surrounded by many other ceremonies. Below is a brief guide to the major parts of baptism in the early Church (Note: This does not include every minute detail, but only the basics.)

Baptism was (and still is in the Catholic Church), preceded by several minor “exorcisms,” where priest or bishop prayed prayers over the catechumen about to be baptized, freeing them from any attachment to sin.

According to the Apostolic Tradition, “They shall spend all that night in vigil, listening to reading and instruction.” Baptism was a major life-change for these early converts and the Church wanted to ensure that they were well prepared.

Profession of Faith and Renouncement of Sin

Before baptism could be administered, the catechumens had to profess their faith in front of the priest/bishop and renounce their former way of life. The Catholic Encyclopedia explains how this renunciation and profession was practiced.

The catechumen standing with his face to the West, which symbolized the abode of darkness, and stretching out his hand, or sometimes spitting out in defiance and abhorrence of the devil, was wont to make this abjuration. It was also customary after this for the candidate for baptism to make an explicit promise of obedience to Christ. This was called by the Greeks syntassesthai Christo, the giving of oneself over to the control of Christ. St. Justin Martyr testifies that baptism was only administered by those who, together with their profession of faith, made a promise or vow that they would live in conformity with the Christian code…During this declaration of attachment to Jesus Christ the person to be baptized turned towards the East as towards the region of light.

Those to be baptized were anointed with oil before and after baptism. The first oil was an “oil of exorcism” and the second oil after baptism symbolized their anointing into the three-fold mission as “priest, prophet and king.” The current formula for anointing the newly baptized explains this symbolism, “As Christ was anointed Priest, Prophet, and King, so may you live always as a member of his body, sharing everlasting life.”

Stripping off the old, to put on the new

The Apostolic Tradition explains how those to be baptized must “remove their clothing,” and go into the water “naked.” Scholars debate the extent to which baptisms were “naked” and whether or not it meant simply the outer garments, or all clothes. In either case it spiritually represented a particular “death” to the old self and a firm departure from sin. It was a physical reminder that they were to be born a new person in baptism and had to cast off their old ways, discarding their old clothes in order to put on the new life in Christ.

Immediately after baptism the newly baptized would put on a white garment, which represented the cleansing of their sins and the purity of their soul, born anew in the font of baptism.

The current rite of baptism in the Catholic Church illustrates this symbolism.

You have become a new creation,
and have clothed yourself in Christ.
See in this white garment the outward sign of your Christian dignity.
With your family and friends to help you by word and example,
bring that dignity unstained
into the everlasting life of heaven.

In many ways the Catholic Church has faithfully maintained the early practices of baptism, seen most fully in the Rite of Christian Imitation for Adults, but can also be glimpsed in a condensed form in the baptism of infants.

Baptism is a beautiful sacrament, one which marks the soul of a Christian for all eternity.