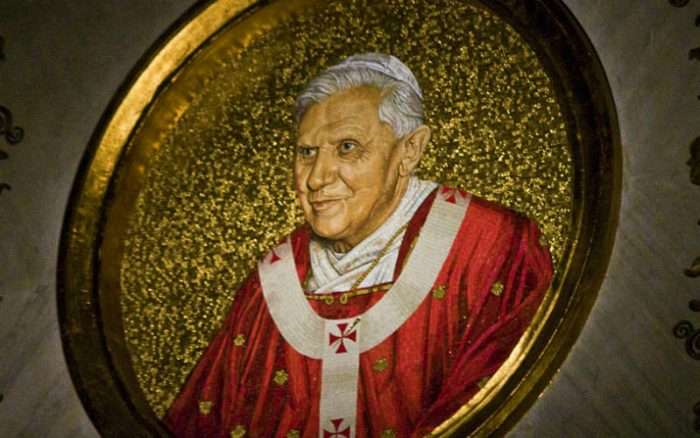 When Pope emeritus Benedict XVI resigned as pontiff three years ago, he added a new dimension to the papacy, said his personal secretary Archbishop Georg Ganswein.

Archbishop Ganswein remains prefect of the Pontifical Household. He works closely with both Benedict and Pope Francis.

The archbishop spoke about Benedict’s pontificate and its wake at a May 20 book presentation of “Oltre la crisi della Chiesa” (Beyond the Church’s Crisis) by Father Roberto Regoli, an historian and professor at the Pontifical Gregorian University. The book aims to be the first history-based evaluation of Benedict XVI’s pontificate.

Archbishop Ganswein stressed that there is only one legitimate Pope – Francis. However, for the last three years, Catholics have lived “with two living successors of Peter among us.” He said Benedict and Francis “are not in competition with each other, though they have an extraordinary presence.”

For Archbishop Ganswein, Benedict XVI’s resignation announcement on Feb. 11, 2013 marked the introduction of a new institution into the Catholic Church: the Pope emeritus.

Pope Benedict used a key phrase in his resignation speech: “munus Petrinum.” This phrase is often translated “Petrine Ministry.” According to the archbishop, the Latin word “munus” has many meanings: service, commitment, guide, gift, even wonder.

“Benedict XVI thought of his commitment as a participation in that Petrine ministry,” the archbishop said. “That means that he left the papal throne, but he did not abandon this ministry.”

Benedict XVI now acts “with a collegial and synodal dimension” and a “common ministry” that appears to echo his episcopal and papal motto: ‘cooperatores veritatis,’ ‘cooperators of the Truth’,” he said.

Hence, “since Pope Francis’ election, there are not two Popes, but there is a de facto enlarged ministry, with both an active and a contemplative member.”

The archbishop said that this is why Benedict did not renounce his papal name or give up his white cassock.

“This is the reason why the correct appellation for him is ‘Your Holiness.’ This is finally the reason why he did not retire to an isolated monastery, but within the Vatican walls, as if he just took a step aside to make space for his successor and for a new step in the history of the papacy,” Archbishop Ganswein said.

This is how Benedict XVI has “profoundly and lastingly transformed” the papal ministry during his “exceptional pontificate.”

Archbishop Ganswein also reflected on the meaning of Benedict XVI’s election. He said that the election was “certainly the outcome of a clash” whose key interpretation had been given by Cardinal Joseph Ratzinger himself in his homily for the pre-conclave Mass on April 18, 2005.

Then-Cardinal Ratzinger reflected on the clash of two forces. He criticized “a dictatorship of relativism” that does not recognize anything as definitive and whose ultimate goal consists solely of one’s own ego and desire.” With this, he contrasted Christians’ goal of Jesus Christ, the Son of God and “the true man.” This is “the measure of true humanism.”

This clash is epitomized in what Archbishop Ganswein described as “the dramatic struggle” between two parties in the conclave. He labeled one the “Salt of the Earth” party after the name of a book-length interview with Cardinal Ratzinger. This party gathered around Cardinals Lopez Trujillo, Ruini, Herranz, Rouco Varela and Medina Estevez.

Then there is the so-called St. Gallen group gathered around Cardinals Daneels, Martini, Silvestrini and Murphy-O’Connor. This is the group, Archbishop Ganswein noted, that Cardinal Daneels “himself amusedly described as ‘a sort of Mafia-club’.”

Archbishop Ganswein said that “the dictatorship of relativism” is now being channeled through the new media that could barely be imagined in 2005.

Once for all, Archbishop Ganswein rejected the notion that Benedict XVI’s resigned because of the scandals or following the “black year” of 2010. That year was marked by the breaking of new clergy sex abuse scandals in Europe and followed controversies like that of the Lefebvrist Bishop Richard Williamson, whose excommunication was lifted without knowledge of his remarks minimizing the death toll of Jews in the Holocaust.

Archbishop Ganswein said there are more personal reasons for the Pope to consider 2010 “a black year.” That was the year of the death of Manuela Camagni, one of the four consecrated lay women who were part of the pontifical household. She died after she was struck by a car.

“The media sensationalism of those years, from the Williamson case to escalating attacks on the Pope, did not strike the Pope as much as Manuela’s death did,” Archbishop Ganswein said.

The papal butler, Paolo Gabriele, was then exposed as the source of confidential information about the papacy, which news stories have labeled “Vatileaks.”

The archbishop stressed that “as the Pope was shocked by Manuela Camagni’s sudden death, he then suffered a lot from the betrayal of Paolo Gabriele.”

But he said that Benedict did not resign due to these, or due to “spicy news.” Rather, as the former pontiff said in his resignation announcement, his decision was based on his advanced age and declining strength, which led him to believe that he could no longer exercise the ministry entrusted to him.

“No betrayer or any journalist could push the Pope to that decision,” Archbishop Ganswein stressed, as “that scandal was too tiny” compared with the “well pondered historical step” Benedict XVI made with his resignation.