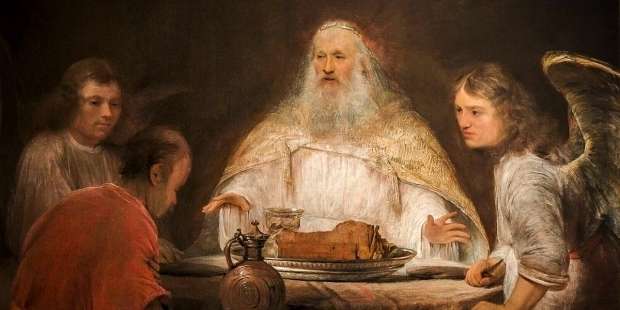 This family’s story will help you make sense of Jesus’ parable of the Last Judgment.

I heard a story recently from a student that horrified me, because I saw just how diabolical one common sin is — a sin I am complicit in but have never confessed.The student’s family was having a quick lunch at an Interstate rest stop two summers ago. When another family saw them make the sign of the cross, they said that they had “tried to be Catholic once.”

“Tried to be Catholic? What do you mean?”

“We started to read about the Catholic faith and began attending Mass at a nearby church each Sunday. We were tithing and everything,” they said. “We went for about two months. But no one ever said hello to us. The pastor never inquired who his new donors were. We just hovered after Mass each Sunday, then got into our car and drove home.”

Eventually, they went back to the Protestant church they had started out in, where they were welcomed back with open arms.

Ouch. I’ve been thinking about the story ever since, and have come up with a few reminders of why we should welcome the strangers in our lives.

First: Do it because you must welcome the stranger if you want to go to heaven.

The family’s story helped me make sense of Jesus’ parable of the last judgment.

We think of the command to “Welcome the stranger” as being about immigration, and it is. But it is also very straight forwardly about greeting people you don’t know.

Second: Take advantage of the trick the Bible offers and don’t think of them as strangers.

Jesus gives us a shortcut to welcoming the stranger when he says to think of it as welcoming him. That raises the stakes considerably.

The Letter to the Hebrews does the same thing, but references Abraham welcoming three strangers who turned out to be angels bearing a life-changing message from God.

“Do not neglect to show hospitality to strangers,” says Hebrews, “for thereby some have entertained angels unawares.”

Think of it this way: Every person you meet is made in the image and likeness of God. C.S. Lewis says that if you met them 100 years from now you would be tempted to worship them if they are glorified in heaven, or to flee from them in terror if they are in hell. Greet them knowing that.

My wife is charitable. I am not. If we had a red carpet she would roll it out for strangers. She has invited new families over after Mass and teaches our children to be on the lookout for those who are not being included in social situations and include them.

Practicing hospitality ungrudgingly requires some preparation. According to St. John Chrysostom, “Every family should have a room where Christ is welcome in the person of the hungry and thirsty stranger.”

Or at least have enough lunch ready, like my wife.

How did Jesus love us? Not just by dying for us; he loved sinners by dining with them, and he loves us by spending time with us in the sacraments. He speaks to people “heart to heart.”

That’s what we are meant to do, also, with real conversation and concern that focuses on the needs of the other.

Your salvation might depend on it. And not just yours.