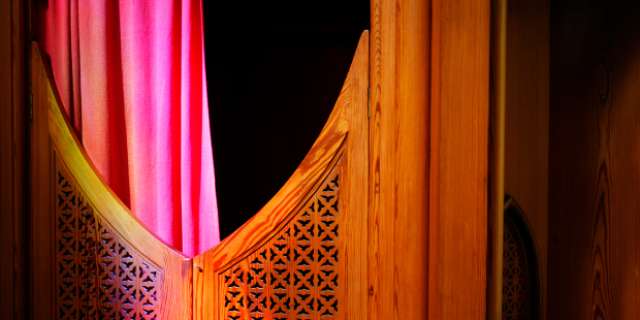 If feeling guilty is the reason you’re NOT going to Confession: A priest’s advice

“I already feel guilty enough about what I did. I don’t need a priest to make me feel more guilty.”

Prayer, fasting, and almsgiving are three spiritual practices we encourage during Lent. As part of those practices, we also encourage making a good confession. And yet, rather oddly, some people see feeling guilty as an obstacle to this sacrament.

If you already feel guilty about something you have said or done, that means you recognize it as wrong. And, that’s not bad. Folks who couldn’t care less if they hurt someone are the worrisome ones. They have the bigger problem. But, back to you.

The priest isn’t there to make you feel more guilty, but to help you move through your sense of guilt to being freed to live the life that God wants you to live. God wants to unburden you from an ego that is focused only on yourself.

6 points for going to confession without feeling more guilty

It’s been a while since I’ve gone to confession.

That’s okay. Just tell that to the priest, and he will help you. The priest understands that people forget, or even never learned, how to go to confession. So, when you go into the reconciliation room (sometimes still called the confessional), just tell him:

“Father, it’s been a while since I’ve made a confession, and I don’t remember how it’s done. Can you help me?” (or) “I haven’t done this before. I don’t know how to begin.”

Remember this ONE thing above all else.

The priest is not there to judge you, but to be a minister of God’s love and forgiveness. He is there to serve you and your relationship with God.

Before you see the priest.

Consider the following two questions in preparation for confession:

How long has it been since your last confession?

What is it that you would like God to forgive you for? If you’re not sure, then ask yourself what prompts you to go to confession. Perhaps …

A confession is not a trial by a judge or jury, but part of the Sacrament of God’s forgiveness — God’s loving embrace of you. God knows that you are not perfect, which is why he gives you Jesus. Jesus died on the cross and rose from the dead. With Jesus, you move through death to life. With Jesus, you can move from feeling guilty to living life as Jesus wants you to live.

Penance is a big Catholic word, meaning contrition, or, turning away from … sin. The priest will suggest a penance, typically a simple course of action and often related to what you seek forgiveness for. Consider it as similar to a medication that helps you deal with a condition, to help you repair the bad effects that follow sin.

The priest might also offer suggestions for the bigger picture of what you’ve brought up. For example, I usually keep in the confessional (reconciliation room) a few articles and copies of a book that can be helpful for some of the more common concerns people bring up.

The priest will then pray the Prayer of Absolution over you. I urge you to hear the words as being said to you by Jesus. After all, you truly are making your confession to Jesus, and Jesus does the forgiving.

Also, the prayer offers a marvelous summary of the Catholic theology of forgiveness and reconciliation.

God, the Father of mercies, through the death and resurrection of his Son has reconciled the world to himself and sent the Holy Spirit among us for the forgiveness of sins; through the ministry of the Church may God give you pardon and peace, and I absolve you from your sins in the name of the Father, and of the Son, + and of the Holy Spirit.

God waits; give him space

That’s it! Nothing there to make you feel more guilty when you leave. Quite the opposite is true. The Sacrament of Reconciliation (going to confession) assists in transforming your feelings of guilt into the warmth of God’s grace that transforms how you live.

Bonus: Here are my favorite quotations about forgiveness from the Bible and Pope Francis:

~
Fr. Dave Mercer is a priest of the Diocese of San José, California, serving a Fidei Donummissionassignment at St. Joseph Apache Mission, on the Mescalero Apache Reservation, in New Mexico. You can find him on Facebook and Twitter.