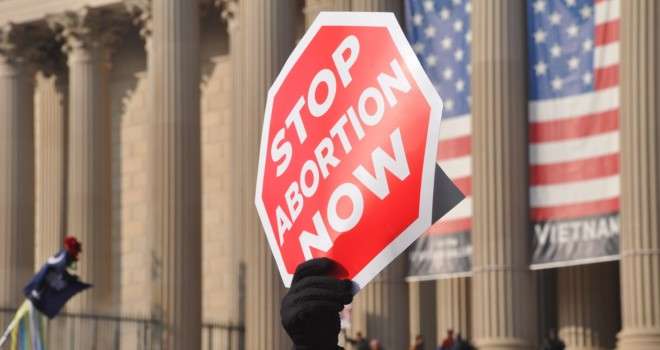 Is Opposition to Abortion Merely a Religious Position?

A few years ago, I saw a political cartoon that had a priest asking Tim Kaine (Hillary Clinton’s running mate in 2016) if he rejects Satan and all his works. In response he asks the priest, “Personally or politically?” The point of the cartoon was that Tim Kaine, a Catholic who supports the legal right to abortion, wrongly separates his faith from his politics on this issue. He says he is personally against it, but he thinks women should be allowed to abort their babies if they want to.

Like a lot of pro-choice Catholics, Kaine defends this political doublethink by saying that his personal opposition to abortion is a religious belief, and because we have a separation of church and state in this country, he can’t impose that religious belief on others. This, many like him claim, would be like forcing everybody to be baptized or go to Mass on Sundays. Nobody would support such policies, so we should not force people to abide by the Church’s teaching on abortion either.

At first, this argument may seem sound, but it is actually based on a misunderstanding of what the Church says about abortion. It is true that the government should not impose religious beliefs or practices on its citizens, but our opposition to abortion is not just a religious belief. Yes, the Catholic Church (an undeniably religious organization) teaches that abortion is a sin (an undeniably religious concept), but to reduce it to just a religious issue is to seriously mischaracterize it.

What Reason Can Know

To understand what I mean, let’s begin with something St. Paul says in his Letter to the Romans:

“For what can be known about God is plain to them, because God has shown it to them. Ever since the creation of the world his invisible nature, namely, his eternal power and deity, has been clearly perceived in the things that have been made. So they are without excuse; for although they knew God they did not honor him as God or give thanks to him…They were filled with all manner of wickedness, evil, covetousness, malice. Full of envy, murder, strife, deceit, malignity, they are gossips, slanderers, haters of God, insolent, haughty, boastful, inventors of evil, disobedient to parents, foolish, faithless, heartless, ruthless. Though they know God’s decree that those who do such things deserve to die, they not only do them but approve those who practice them.” (Romans 1:19-21, 29-32)

In this passage, Paul is talking about the universality of sin. He is explaining that when people reject God, they descend deeper and deeper into sin, and the people he is describing do not need any special revelation from God to know that what they are doing is wrong. In fact, his whole argument here is based on what we humans can figure out on our own simply by looking at the world around us and reflecting on it. He tells us that we do not need revelation to know the existence of God, our status as his creatures, or the precepts of the moral law (sometimes also called the “natural law”).

Interestingly, while the Bible says that these things can be known without the help of divine revelation, the Church still teaches about them. For example, the Nicene Creed, which Catholics recite every Sunday at Mass, professes that the one God is “maker of heaven and earth, of all things visible and invisible,” and this belief is reiterated in the Catechism of the Catholic Church (CCC 279). Moreover, the Church has always forbidden acts like murder, theft, and adultery, which everybody knows are wrong.

And the Church herself recognizes this. Taking her cue from St. Paul, she actually teaches that we do not need any special revelation to know about God (CCC 36) or the moral law (CCC 1954).

But why does the Church do this? Why doesn’t she limit herself to teaching about things that can be known only via divine revelation? The answer is that just because something is possible does not mean it is easy. While it is possible to know God from reason alone, the majority of people do not know the philosophical arguments for his existence. In fact, most never even try to learn them, so without the aid of divine revelation, the idea of God would probably be a foreign concept to them. Likewise, we can theoretically know right from wrong with perfect accuracy by reason alone, but in practice that never happens. There are simply too many ways for us to make mistakes in our moral reasoning, so left to our own devices, we’ll inevitably make at least a few.

That is why the Church teaches things that can be known by unaided reason. Since it is difficult to get it all correct on our own, the Church steps in and uses her God-given authority to help us be sure about these things. As the Catechism explains:

“This is why man stands in need of being enlightened by God’s revelation, not only about those things that exceed his understanding, but also about those religious and moral truths which of themselves are not beyond the grasp of human reason, so that even in the present condition of the human race, they can be known by all men with ease, with firm certainty and with no admixture of error.” (CCC 38)

And this is why abortion is not just a religious issue. According to the Church’s teaching about it, abortion “is gravely contrary to the moral law” (CCC 2271). This teaching is “based upon the natural law and upon the written Word of God” because abortion is “contrary to the Law of God which is written in every human heart, knowable by reason itself, and proclaimed by the Church” (Evangelium Vitae 62). In other words, the Church says that we don’t need any special revelation from God to know it is wrong. It is one of those things the Church teaches about even though it can be known by unaided human reason.

That is why there are many people who argue against abortion strictly on philosophical and scientific grounds, without any recourse to religion or revelation. For example, Robert George and Christopher Tollefsen, two prominent Catholic philosophers, have written a book arguing against abortion from reason alone, and there is a whole organization called Secular Pro-Life that is dedicated to fighting abortion on purely secular, non-religious grounds.

Not Imposing Our Faith

Consequently, when we really understand the Church’s teaching on abortion, we can see that opposing it is nothing like forcing people to be baptized or go to Mass on Sundays. Those are purely religious practices that we know about only from revelation, and if God hadn’t told us about them, they would never even cross our minds. But the issue of abortion is different; it is more like the Church’s teachings against murder and theft. Nobody in their right mind would say that they oppose laws against killing and stealing because they don’t want to impose their religious beliefs on others. No, those are precepts of the moral law, things that can be known without the aid of revelation, so the government can enact laws against those practices.

Similarly, the immorality of killing a fetus in the womb can also be known apart from divine revelation, so the government can forbid abortion as well. Because of this, we Catholics who oppose abortion are not trying to impose our religious beliefs on others. We are just acting in accordance with the moral law, which everyone, Catholic and non-Catholic alike, can grasp.

From all this, it is clear that Catholics cannot be personally against abortion but publicly in favor of it. Those who hold that position either do not understand the Church’s teaching on the matter or deliberately pervert it to suit their own ends. Either way, our faith does not leave any room for political support of acts that are gravely contrary to the moral law, so we cannot remain faithful to the Church while also advocating for a legal right to abortion.