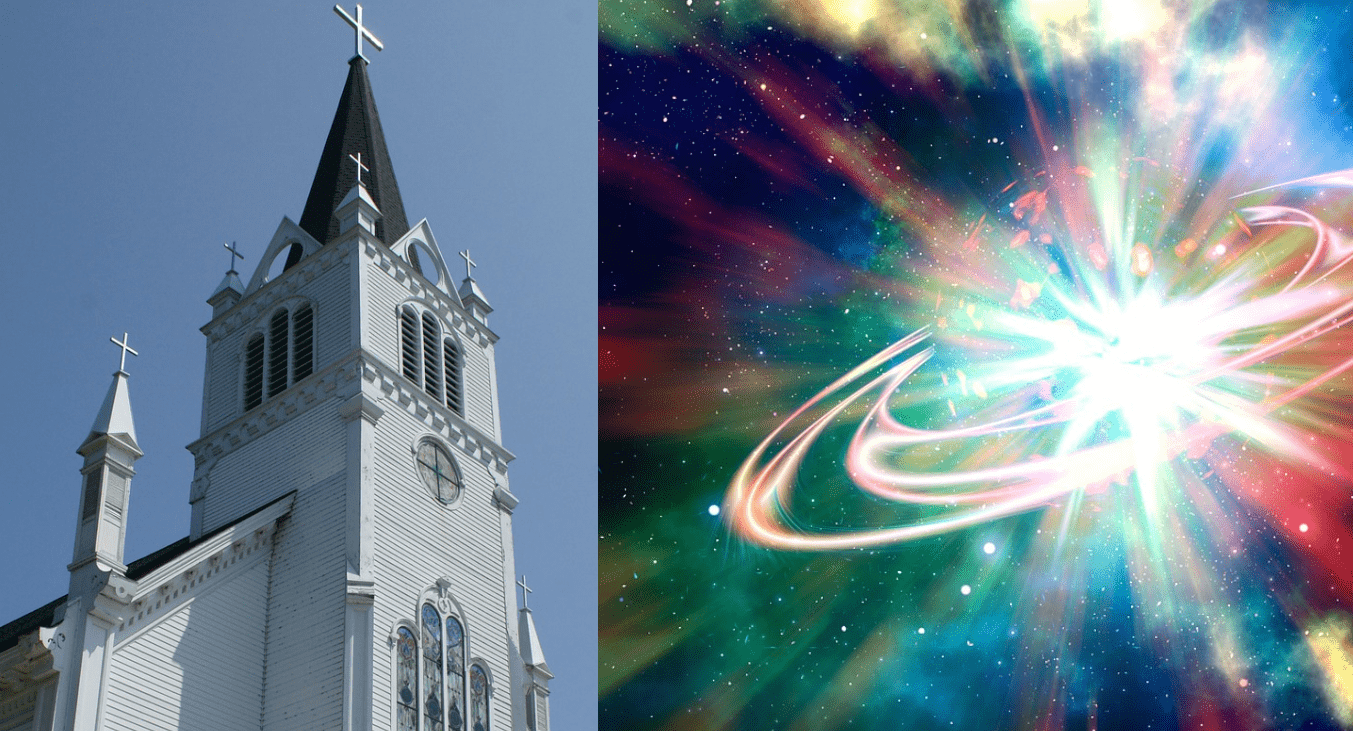 Here’s an interesting question: Is the big bang Church teaching?

The universe is about 13.82 billion years old. Although it is well within the error range of earlier estimates, this new number means that the universe is slightly older than cosmologists previously thought. The new age comes as a result of data just released from the European Space Agency’s Planck space telescope, which for the past 15 months has been taking the most precise images of the oldest light in the universe, the “cosmic microwave background radiation.” This microwave-wavelength light is the remnant of the universe’s earliest days, and is a key piece of evidence for the event we now call the Big Bang.

The basic theory behind the Big Bang (although he didn’t call it that) was first proposed by Fr. Georges Lemaître, a Belgian priest and physicist who combined Einstein’s mathematical description of space and time with astronomer Edwin Hubble’s observations of galaxies, which showed that all of space was expanding. Fr. Lemaître proposed that the entire universe had once in the distant past been in a smaller, unimaginably compact state from which it had energetically expanded in something like an “explosion” of all of space itself. The cosmic microwave background itself, considered the first major empirical evidence for the theory, was first detected (inadvertently) in 1965.

The early universe was an energetic place—too energetic for normal matter to form into the relatively low-energy states we find it today. It was thus a bright and hot place, completely suffused with photons, the basic constituents of light, along with protons, and electrons. When the universe had finally expanded and settled down enough, at about 378,000 years of age, the protons and electrons were able to combine into the first atoms. This freed up the light, the photons, to race through space, filling the young universe with a general electromagnetic glow. As the universe continued to expand to the present day, this “first light” has been stretched out, so that it now appears in the microwave range of the electromagnetic spectrum—hence the name, the “cosmic microwave background.”

The microwave background itself is relatively uniform. It is only with the most advanced of instruments that tiny variations in the temperature of this microwave background radiation can be detected. The importance of the recent Planck mission is that it maps these subtle variations in the greatest detail ever yet obtained. From this data, a number of clues about the nature of the early—and by extension, the modern—universe can be uncovered.

For instance, the data has given us the new age for the universe. The number was previously reported as 13.7 billion years, give or take about 120 million years. The new number, 13.82 billion years, falls at the older end of that range. A second interesting bit that has emerged from the Planck data is that the cosmic microwave background is slightly asymmetric. The universe, it turns out, is slightly cooler on one side. Theory predicts that the background should be homogeneous. The reason it is just slightly skewed is unknown. One tentative and controversial proposal is that this asymmetry might be evidence of factors affecting the moment of the Big Bang—from the outside. In other words, it could be a sign that, as some proposals suggest, the Big Bang event might have occurred with a larger-scale universal framework of many inflating regions like our own.

Would such an idea threaten the Church’s belief in Creation?

Interestingly, it was Fr. Lemaître himself who cautioned the Pope against too simply identifying the Big Bang, as a scientific theory, with the moment of creation ex nihilo. The cosmic microwave background represents the farthest back we can see scientifically. All of the evidence supports the story of the universe we know emerging from a point some 13.8 billion years ago. We can’t, however, see past that—at least yet. It may be that studies like the new data from Planck show that there is good reason to believe that the Big Bang was preceded by an even more ancient universal history; alternatively, the evidence may continue to support the idea that nothing beyond the Big Bang is detectible. Was the Big Bang really the Beginning? It certainly looks like it, but you never know what science might uncover in the future. But the doctrine of Creation is a theological doctrine, not a scientific one. It is a reality presupposed by the practice of science, not a conclusion reached within it. The Church is content to teach that the universe did have a beginning, and was created by God from nothing. The details are left to science.