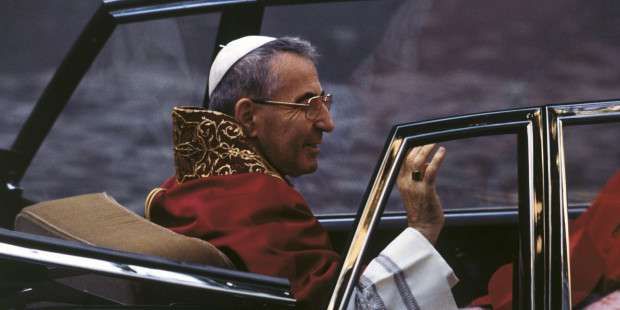 Catholic Home » Articles » Is the mystery over the death of John Paul I finally solved?

Classified documents and testimonies regarding the circumstances of the death of Pope John Paul I—who led the Catholic Church for only 33 days—will be published November 7, in the book Pope Luciani: Chronicle of a Death (Papa Luciani: Cronaca di una morte, Piemme, 252 pages), written by journalist Stefania Falasca. The prologue was penned by Pope Francis’ secretary of state, Cardinal Pietro Parolin.

The book—written in Italian—shares part of the results of the investigation carried out by Falasca, who is also the vice postulator of the cause of beatification of John Paul I, born Albino Luciani.

The text draws on secret files from the Holy See and the medical report regarding one of the mysteries of the Catholic Church that has inspired great speculation: the death of the pope at age 66, barely a month after being elected the 263rd Successor of Peter.

“The research, which has now been compiled in this book, focuses on the last hours of the life” of Pope John Paul I, and is based on “the available documentation and evidence … carried out in accordance with historical-critical criteria,” wrote Cardinal Parolin.

Among other documents, the book cites the report drawn up by Renato Buzzonetti, the doctor who ran to the bedside of the deceased pope. The night before (7:00 p.m.), Luciani had suffered chest pains for about five minutes, but this didn’t cause great alarm.

Angelo Gugel, the pope’s butler, confirmed that the Holy Father felt ill that night while praying with his secretary, John Magee. However, Magee recounts that the pope didn’t want anyone to worry. Consequently, he didn’t call a doctor, and as a result, he wasn’t given any medicine.

Countless pages have been written about the mysterious death of the “Smiling Pope,” as he was called, who was found lifeless in his bed shortly after dawn the following morning (5:15 a.m.) on September 29, 1978, by Sister Vicenza Taffarel and Sister Margherita Marin.

The nuns who served the pope are documented as having said that Pope Luciani hadn’t been living overwhelmed with anxiety—contrary to what some people have written—after being elected to the See of Peter. He prayed, worked, and smiled, and didn’t follow any special diet or receive any special care for health reasons.

Writers and journalists have delighted in presenting hypothetical connections between the story of the shortest papacy in history and the Italian Mafia and the Vatican Bank. Hollywood also made its speculative contribution in The Godfather 3 (Coppola, 1990).

“His sudden and unexpected death” has given life, in the following decades, “to a great number of theories, suspicions, and suppositions. He died too soon and too suddenly,” admitted the Vatican Secretary of State in the prologue.

Thus, the cardinal presented Falasca’s work as putting an end to inferences based on a lack of information, on exaggeration, and on distorted “film noir”-style reconstructions of the events that took place that night and the morning of September 29, 1978.

“Nor should we forget the value of the pages of the book’s introduction, before entering into the discussion of the last hours of Albino Luciani’s life; in them, the figure of the pope is briefly but effectively outlined. It is a useful guide for those who are interested in learning new details about the death of Pope Luciani, and for those who know little of his life and teachings,” Cardinal Parolin commented.

On the path to beatification

Albino Luciani was born in Belluno, near Venice, in northern Italy. The diocesan stage of his cause for beatification, which began in 2003 with nearly 200 testimonies, is now in the hands of Rome. That is to say, the documents are being studied by the Vatican Congregation for Saints’ Causes so they can be verified. If they are approved, he can be declared blessed.

On November 7, the cardinals and bishops of the commission convoked by the Vatican dicastery will evaluate Luciani’s “heroic virtues”; they could then send the decree to Pope Francis to be signed in the coming days.

The beatification will have to await the due course of approval of the two processes that are examining presumed miracles through the intercession of the “Smiling Pope.”

Cardinal Parolin remembers fondly when Albino Luciani, the Patriarch of Venice, became John Paul I. “The cardinals, certainly, didn’t elect him based on political strategies, but rather, strictly according to ecclesial criteria.”

Secretary of State Parolin highlighted the humility and simplicity of John Paul I, and his personality as a bishop who was a “good shepherd.”

Amidst the collection of evidence in the process of beatification and canonization, there is the eyewitness account of Sister Margherita Marin, 77 years old, who served the pope and who found him dead that morning. “He was in bed with a slight smile,” she said.

Falasca interviewed the nun, who had served in the papal apartments; the journalist shared her revelations in the Italian newspaperAvvenire (Nov. 4, 2017).

It was 5:15 a.m., and as every other morning, Sister Vicenza (the older of the two nuns who served the pope) “had left a cup of coffee for the Holy Father in the sacristy right outside the pope’s apartment, in front of the chapel. The Holy Father, leaving his room, used to drink the coffee in the sacristy before going into the chapel to pray.”

However, “that morning, the coffee was still there. After about 10 minutes, Sister Vincenza said, ‘He hasn’t come out yet? Why not?’ I was there in the hallway. So, I saw that she knocked once; she knocked again, there was no reply … Still silence. Then, she opened the door, and then she went in. I was there, and I stayed outside while she went in. I heard her say, ‘Your Holiness, you shouldn’t pull these jokes on me.’” Sister Vicenza had heart problems as well.

“Then, she called me as she came out, shocked; then I went in quickly with her, and I saw him. The Holy Father was in his bed, the reading light over the headboard still on. He had his two pillows under his back, which propped him up a bit; his legs were stretched out, his arms were on top of the sheet, in pijamas, and in his hands, resting on his chest, he was holding a few typewritten sheets. His head was slightly turned to the right, with a slight smile. His glasses were on his nose, his eyes partially closed … he looked just as if he were sleeping. I touched his hands, and they were cold; I looked, and was struck by the fact that his fingernails were slightly dark.”

Everything was in its place. There was nothing to suggest that someone had disturbed the peace of his bedroom. Hopefully, the eyewitness details in this well-documented book will finally put equally to rest the rumors and conspiracy theories surrounding the death of Albino Luciani, Pope John Paul I.