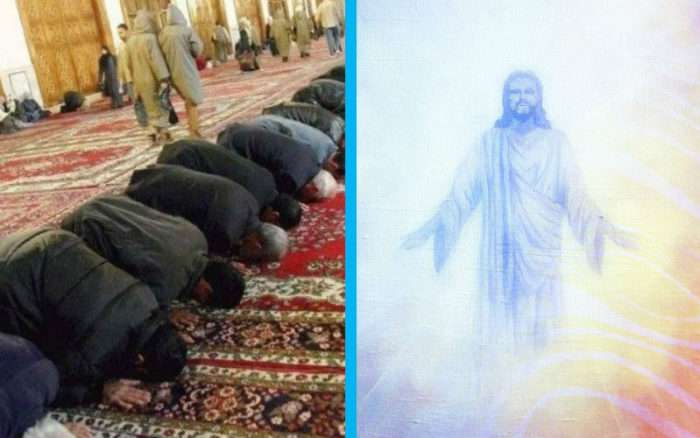 Naeem Fazal was born and raised in Kuwait in a Muslim family. After the first Gulf War, his family emigrated to the US, where he was exposed to Christianity for the first time.

Then, while in college, Jesus mystically entered his life: “I had a supernatural interaction one night in which I experienced Jesus in my room. That encounter forever shifted the course of my life.” Fadal is is now the pastor of an evangelical Christian mega-church in North Carolina and is devoted to bringing others closer to Jesus.

Incredible? Yes. But unique? Apparently not so much.

“The majority of the [Muslims-Christian] conversion stories I hear,” Fadal says, “seem to involve dreams and visions inspired by the Holy Spirit in which Christ is supernaturally revealed.”

“Your life in not your own”

Here’s a more detailed account of what Fazal said he experienced: in the middle of the night, while laying in bed, Fazal suddenly became aware of an evil presence in his room. It sat on his legs and grabbed his shoulders. Then his door opened on its own and a second evil presence joined the first.

Terrified that he was experiencing a demonic attack, and not knowing what to do, he called out for help to someone with whom he had only recently become acquainted: Jesus Christ. At once, the dark beings vanished.

Later in the night, he felt someone grabbing his shoulders again, except this time it was Jesus himself, who said, “I am Jesus. Your life is not your own.”

And his life was never the same again.

Saeed Abedini has a similar story.

Abedini was born into a devout Muslim family in Iran. But when he was 20 years old, he fell into a crisis of faith. He was depressed and was starting to get involved with radical Islamic groups when he came upon a Bible and decided to read it seriously for the first time.

Then, one night, he was awakened by a strange voice. “Saeed,” the voice said to him, “I am coming soon. Go preach My Gospel!” The voice repeated this three times and a bright light started shining through his window. As soon as Abedini agreed to the voice’s request, the light faded and he saw what looked like Jesus leaving through his window.

Abedini and his wife spent the next few years passionately preaching the Gospel in Iran. They personally started 100 house churches across 30 different cities in the Muslim country. Abedini was later imprisoned in Iran for several years for converting to Christianity, and was released only recently in January of 2016.

There are many more stories like these. So what should Christians make of them?

“I can’t explain it,” evangelical leader Franklin Graham said at a pastors meeting in 2014. “I’m not even going to attempt to explain it. I just tell you: it happens. God is at work in that part of the world in a great way.”

The Catholic Church teaches that miracles, including mystical visions, can and do occur. In fact, many of the Church’s greatest saints were mystics. Whether a particular alleged mystical encounter is legitimate, however is hard to tell in individual cases. The Church sometimes investigates miracle claims, but only rarely and if the claim is causing a problem. Nonetheless, if the visions are leading people closer to Jesus, that’s a good thing.

Whatever you make of them, these stories should serve as a reminder to a vitally important fact: that the saving Gospel of Jesus is for everyone – including Muslims. Rather than be afraid, Christians must be willing to humbly but boldly take the Gospel to all people.

Perhaps Jesus is preparing the way with these visions.