This Sunday, we get a look at how the root of all sin really does destroy us, now and in eternity, too.

Pride destroys our happiness on earth more than any other single thing we suffer. This is the lesson of the readings this Sunday, the 22nd Sunday, Year C.But a corollary lesson is also true: If we let it, pride can also destroy our happiness forever.

Hurt pride flares up at unexpected times and gnaws at you.

Sometimes, it is because a family member — or maybe the whole family — doesn’t treat you with the same kind of respect they treat others.

Sometimes, it is because someone else’s area at work is given great new resources and yours, despite how much you put into it and how much good it could do, is taken for granted and overlooked.

Sometimes, it even happens at church: With something so small as the choice of one volunteer over another, or something large, affecting your family and friends, you feel ostracized and rejected.

Hurt pride wakes you up at night, whispers in your ear to spoil your leisure time, and preoccupies you when you try to focus on other things.

This is exactly what Jesus warns will happen.

“Do not recline at table in the place of honor,” he says. If you do, you are inviting hurt pride when the host taps you on the shoulder and drags you down in front of everyone.

Instead, start out by taking the lowest place, he says. Then what you may hear is, “My friend, move up to a higher place,” and “you will enjoy the esteem of your companions at table.”

At first, this seems odd — as if Jesus is saying, “The best way to get respect is to act humble.”

But he clarifies with what he says next. When you have company for dinner, he says, “Do not invite your friends or your brothers or your wealthy neighbors, in case they may invite you back and you have repayment.”

Rather, he says, “When you hold a banquet, invite the poor, the crippled, the lame, the blind.”

In other words, Jesus isn’t saying just to act humble — he is saying to prefer the lowest place. Just like him.

Those who always want the best, and always expect to be treated with admiration and appreciation are destined to live a life of disappointment and bitterness. Very few people reach the state where their importance is acknowledged by everyone, and those who do — even if they become president of the United States — open themselves up to more, not fewer, direct blows to their pride.

Look how Jesus lived, instead. He was the literal Son of God, yet he applied the 22nd Psalm to himself on the cross: “I am a worm, not a man, scorned by men, despised by the people. All who see me mock me.”

But can you find happiness down in the lowest place on earth?

Look at the place Jesus takes at the table at each Mass. He is lower than the lowest place — he is the food. And that gives him the highest place of all — the source and summit and unity of all.

This lesson becomes even more important when we look at our relationship with God.

Jesus’ story isn’t just about human interactions, though. It is, importantly, about heaven. It comes shortly after he says “strive to enter the narrow door” into heaven. It comes right before “the parable of the great banquet,” describing heaven as a giant dinner party.

If you take the higher place with God — telling yourself that you understand him, and that he will definitely welcome you to heaven, and making yourself comfortable, then God’s message to you is in the Second Reading.

The Letter to the Hebrews reminds you that God is not something that “could be touched,” and what you seek is “the city of the living God, the heavenly Jerusalem and countless angels in festal gathering and the assembly of the firstborn enrolled into heaven, and God the judge of all, and the spirits of the just made perfect, and Jesus, the mediator of a new covenant.”

Do not presume you will stride confidently into that awe-inspiring gathering of extreme holiness like you belong there, no questions asked.

Rather, you should take the attitude the Book of Sirach does.

“Humble yourself the more, the greater you are, and you will find favor with God,” says Sunday’s first reading.

What you will hear in the afterlife is in the Psalm: “God gives a home to the forsaken; he leads forth prisoners to prosperity.”

Humility is the only way to get to God. If you presume God will automatically receive you, then you misunderstand who he is and who you are. If you understand your place from the beginning, a seat of honor awaits you. 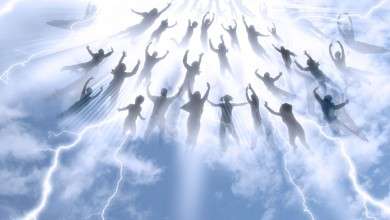