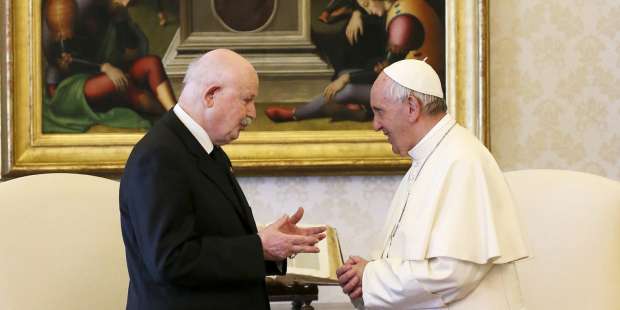 Giacomo Dalla Torre had been under treatment for throat cancer.

The leader of the worldwide charity the Order of Malta has died at age 75.The order announced Wednesday, “the death of His Most Eminent Highness the Prince and 80th Grand Master Fra’ Giacomo Dalla Torre del Tempio di Sanguinetto, which took place in Rome a few minutes after midnight on 29th April, following an incurable disease diagnosed a few months ago.”

Catholic News Agency said Dalla Torre had been in treatment for throat cancer in recent months.
The Sovereign Order of Malta is a lay religious order of the Catholic Church begun in 1113. It has diplomatic relations with over 100 states and the European Union, and permanent observer status at the United Nations. It is neutral, impartial and apolitical. Today, the Order is active in 120 countries caring for people in need through its medical, social and humanitarian works. Day-to-day, its broad spectrum of social projects provides a constant support for forgotten or excluded members of society. It is especially involved in helping people living in the midst of armed conflicts and natural disasters by providing medical assistance, caring for refugees, and distributing medicines and basic equipment for survival.

Dalla Torre had served as grand master of the Order of Malta since May 2018 and as interim grand master for a year before that.

Grand Commander Fra’ Ruy Gonçalo do Valle Peixoto de Villas Boas has assumed the functions of Lieutenant ad interim and will remain head of the Order until the election of the new Grand Master.
Dalla Torre was born in Rome on December 9, 1944. He graduated from the Sapienza University of Rome, specializing in Christian archaeology and art history. He taught classical Greek at the Pontifical Urbaniana University and served as chief librarian and archivist for the university’s important collections. He published a range of academic articles and essays on aspects of medieval art history.

Admitted to the Sovereign Order in 1985 as Knight of Honor and Devotion, Dalla Torre took solemn vows in 1993. From 1994 to 1999 he was Grand Prior of Lombardy and Venice and from 1999 to 2004 a member of the Sovereign Council. He was elected Grand Commander at the Chapter General of 2004 and on the death of the 78th Grand Master, Fra’ Andrew Bertie, in February 2008 he became Lieutenant ad interim. From 2008 to 2017 Dalla Torre held the position of Grand Prior of Rome. Upon the resignation of the 79th Grand Master, Fra’ Matthew Festing, the Council Complete of State of April 29, 2017 elected him Lieutenant of the Grand Master for a year. In the subsequent Council Complete of State of May 2, 2018 he was elected 80th Prince and Grand Master of the Sovereign Order of Malta.

Dalla Torre participated in numerous Order of Malta international pilgrimages to Lourdes and national ones to Loreto and Assisi. He took part in the Order’s international summer camps for young disabled people.

As Grand Master, Dalla Torre carried out numerous official and state journeys. Last January, for example, he made a state visit to Benin and in July to Cameroon. More recently, he travelled to Germany, Slovenia and Bulgaria for meetings with their respective authorities. During these journeys he always made a point of visiting the Order’s social-health facilities to greet personally both the staff and the patients.