If you found yourself complaining of a rumbly stomach on Ash Wednesday, or whining about the McDonald’s fish sandwich in your lunch on Friday, you may want to think of the Catholics of the past and be silent.
Fasting used to be a much more strenuous affair, with Catholics not being able to eat anything until sunset. The “when” of the main meal was eventually allowed at 3 p.m., and then at noon, and then even earlier if one had a good reason. The rules of fasting and abstinence have changed even more over time, making the rules of fasting for a modern Catholic seem pretty relaxed in comparison, even when looking at how the requirements have changed in the past 100 years or so.
An archived article from the Denver Catholic Register, dated during Lent of 1906, lays out the much more stringent guidelines followed by Catholics of yesteryear.

Here are the rules from 1906 pertaining particularly to the Lenten fast:

2. All days of Lent, except for Sundays, were days of fasting, like a modern Catholic would fast on Ash Wednesday and Good Friday – one full meal, and two smaller snacks.

3. Meat was only allowed during Lenten meals with a dispensation. At the time, the Denver diocese gave a dispensation that allowed the eating of meat at the full meal of the day, except for on Wednesdays, Fridays, Ember Saturday and Holy Saturday.

4. Fish and “flesh meat” were not allowed to be eaten at the same meal, even on Sundays.

5. Typically, a fasting day would look like this: coffee, tea or some other beverage in the morning, the full meal at noon, and a small snack, called a “collation”, in the evening. Meat was only permitted at the full meal, but the snack could include animal products such as butter or cheese – a new exception at the time, allowed by a special Indult of the Holy See.

6. The use of lard or drippings was permitted in the preparation of non-meat meals.

8. Exceptions to fasting were allowed for anyone younger than 21 or older than 60, for anyone in “hard labor”, and for those sick or for whom the fast would negatively impact their health.

9. Those not bound to fasting could eat meat more than once on days when meat was permitted.

10. Workingmen and their families were allowed to eat meat once a day on all fasting and abstinence days, except for Fridays, Ash Wednesday, and the Wednesday and Saturday of Holy Week. 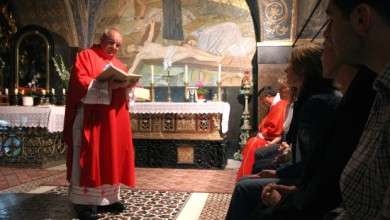