Sometimes we need to stop and use our imagination to gain a fresh understanding of the Epiphany.

Contents hide
1 Sometimes we need to stop and use our imagination to gain a fresh understanding of the Epiphany.
2 Read More

Frequently we hear of the Magi and their long journey to Judea to seek the King who was born. Unfortunately, often we can swiftly pass by their story because of our familiarity with it. We dismiss it and move on with our lives.

Yet, it is one of the most important parts of the Christmas story and contains a great many spiritual truths embedded in it. One way we can tap into this spiritual treasure is to pause for a few moments and imagine the scene in our mind. St. Ignatius of Loyola was a big promoter of using imagination during meditative prayer and believed it was one method to unlock the mysteries of God.

Here is a beautiful meditation from The little book of the most holy child Jesus, a prayer book published in 1876. It can act as a springboard for further pondering and lead to a deeper experience of the mysteries of the Epiphany.

Jesus, Mary, and Joseph are again in the poor stable-cave.

The faithful shepherds have come, have worshiped, and have gone back to their flocks with a great strong joy in their souls.

The people of the city of David heed not.

It is, as it were, nothing to them that the Son of David, David’s Lord, is born amongst them: that God, the eternal Word, has become flesh, and dwells amongst them.

The thoughts and cares and short-lived joys of this world fill their hearts.

Now behold a strange sight to make one wonder.

Over the place where the young Child lies there shines a star of mild bright ray in the mid air.

Around the door of the rude abode stand the camels and servants and horses of the rich and great.

Three wise men, grave and noble to behold, have alighted.

They bow down low to the ground, and offer rare gifts: bright gold to the Infant King; sweet frankincense to God, who has come on earth; bitter myrrh to the Son of Man, who is to die for men.

Far have these brave hearts traveled. Over hill and plain they followed the star which guided them. They heeded not the ties of home, nor hung back from the toil and danger of a long winter’s journey.

Nothing could keep them back.

Not the jeers of friends who thought them mad.

They have seen the star of the holy Child; it is enough.

It told of the Light of the world, the Light of God, which was to shine in Israel, in the midst of a dark drear world; and now they are come.

They have found the Light. It is Jesus, who is the Light of heaven.

He is in a rude stable, but they heed not its poverty.

His Mother is a poor maiden; she wears no silk nor fine linen, no golden gems; but what matter! She is the Maiden-mother, and in her arms lies Jesus.

And in their souls His light shines, and will shine for ever, evermore.

Epiphany water is a powerful weapon against Satan

The seven capital sins of the Internet 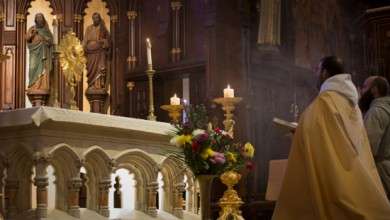