May I receive a blessing at Communion if not receiving the Eucharist?

Unless your bishop or pastor prohibit it, you’re welcome to do so, but only priests or deacons are clearly authorized by Church law to provide such a blessing. Some have argued against such blessings during Communion time, including Archbishop Charles Chaput, when he served as Archbishop of Denver (Denver Catholic Register, February 12, 2003). Archbishop Chaput, now in Philadelphia, argued that the Communion procession wasn’t the liturgically appropriate time for adults and children to receive such a blessing. Instead, he invited people to come up and bow before the Eucharist and thereby make a “spiritual communion.”
On the other hand, I recall when Fr. Peter Stravinskas noted that Pope St. John Paul II gave a child a blessing after giving the child’s mother Communion during a televised Mass at St. Peter’s Basilica on October 19, 2003. And there is no Church norm prohibiting a priest or deacon from similar blessings.
There are concerns regarding extraordinary ministers of Communion providing such blessings during Mass. Laymen are lawfully deputed to give some blessings during Mass, e.g., on the Feast of St. Blaise on February 3 (blessing of throats). However, there is a difference between how an ordained minister (bishop, priest, or deacon) blesses and how a layperson does. The basic difference is that God works directly through the words and actions of ordained priests and other clerics as they intercede for the faithful. A layperson, on the other hand, petitions God for a blessing.
In addition, when laypeople and priests give blessings, the Church typically provides norms that they do so with different words and gestures so that the distinction between their respective roles are not blurred. (See, for example, The Book of Blessings, no. 57.; and the 1997 Instruction on Certain Questions Regarding the Collaboration of the Non-ordained Faithful in the Sacred Ministry of the Priest). Consequently, laypersons should not raise their hands and make the sign of the cross in blessing.
Catholics Answers has inferred from Church norms that lay blessings at Communion time do not appear to be in keeping with Church law, and a 2008 private reply from the Congregation for Divine Worship and the Discipline of the Sacraments made a stronger conclusion in this regard. However, no pope or the Holy See, which includes that aforementioned Congregation, has made a more formal public decision. 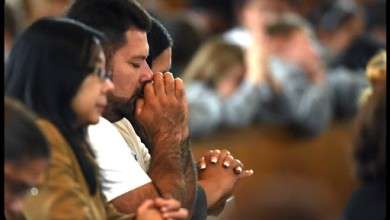 Is It Too Late for You to Be a Saint?