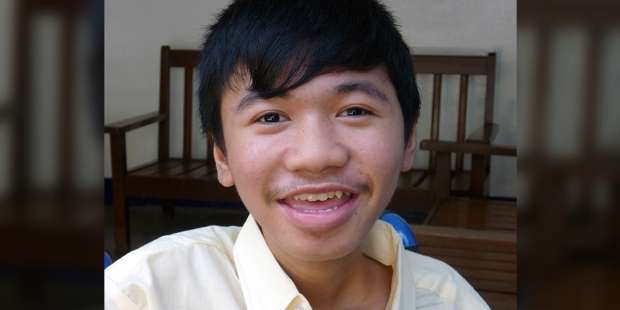 Meet a 17-year-old beggar turned mystic from our own day: Filipino Servant of God Darwin Ramos

You can hardly imagine a rougher start to a rough life. But grace is bigger than the biggest horror.

He was born in the slums of Pasay City on the outskirts of Manila, in the Philippines. He was given the name Darwin Ramos; the date was December 17, 1994. Darwin’s family lived an impoverished existence. His mom was a laundrywoman and his father was a hopeless alcoholic.  As soon as Darwin was old enough, his father had him and his younger sister, Marimar, scouring the nearby trash heaps for items to sell. The children were not sent to school.

Already at 5 years old, something seemed to be wrong with Darwin’s development. His mother saw him stumbling and realized his legs did not seem to have the strength that they should. His muscle weakness increased, and soon, he could not stand up by himself.

When he was 7, he was diagnosed with Duchenne muscular dystrophy. His father viewed the situation as a way to make money and began taking his disabled child to the local train station every morning to beg. People got to know Darwin and felt sorry for the boy.

He collected quite a bit of money every day, and his father would use most of it for alcohol. Darwin was happy that his family was getting food to eat, so he said nothing. This would be Darwin’s life for the next few years: disabled, living in squalor, and begging for money. Then came the year 2006.

In 2006, Darwin was at his usual place at the train station. By now he could no longer stand, and he used his hands for mobility. One day a group of street educators came into the Libertad station and spotted Darwin. They were known as the Tulay ng Kabataan (TNK) aka Bridge of Children Foundation. Their mission was to help the disabled and abandoned children who were living on the streets of Manila.

They began meeting with Darwin three or four times a week, and eventually the boy agreed to go with them to Our Lady of Guadalupe Center, a home for disabled boys. Darwin’s life had suddenly taken a dramatic change. This would also be the first time he was introduced to the Catholic faith.

Darwin was finally getting the proper medical care he’d never had. Although his illness had no cure, it was a wonderful thing for him to be looked after and not have to sit on a train platform day after day begging for money. He also quickly fell in love with Jesus and the Catholic faith. He wanted desperately to become a part of it.

He and Jesus became closer and closer, and soon, all of Darwin’s pain and suffering was being given over to Him as an offering. He never spoke of his illness or called it by name. He would only refer to it as his “mission for Jesus.”

The people that were around Darwin and got to know him came to love him. No matter how much pain he was in, he always had a ready smile waiting. His smile brightened the room and brought much joy to all who came in contact with him. But he was experiencing more and more respiratory distress, which required more and more time in the hospital. He never complained and was quoted as saying to one of the priests on staff, “You know Father, I think Jesus wants me to hold on until the end, just like He did.”

Some describe what followed as Darwin’s Holy Week. On Monday, September 16, 2012, Darwin could no longer breathe on his own and was intubated. He communicated with a pencil and notebook. On Thursday, September 20, Darwin wrote that he was in a spiritual battle with the devil. On Darwin’s Good Friday, September 21, he wrote two last sentences in his notebook: “A huge thank you” and ”I am very happy.” He was anointed and remained silent and sleeping on Darwin’s Holy Saturday.

Servant of God Darwin Ramos, pray for us.

Life of Saints People and History Stories No Comments