A nuncio is not simply a “diplomat in a (priest’s) collar,” but must truly be a priest and bishop who listens, supports and serves as a channel of God’s mercy, Pope Francis said.
Spending much of the day on September 17 with 106 archbishops who represent him and the Vatican in countries around the world, Pope Francis thanked the nuncios for their constant willingness to pack up, move to a new country, learn a new language and deal with new challenges.
And, he said, he knew that every four or five years they get another “sugarcoated” phone call from Rome and do it all again.
Gathered at the Vatican from their posts around the world, the nuncios had meetings, Masses and prayer services as part of their Year of Mercy celebration.
At an early morning Mass, a mid-morning meeting and a luncheon in the Domus Sanctae Marthae, the Pope looked at their personal lives as priests, their service to local churches as his representative and their diplomatic service in a world often marked by conflict, fear and attempts to limit religious freedom.
“One of my deepest concerns regards the selection of future bishops,” he told the nuncios, who have the task of identifying potential candidates for vacant dioceses, consulting with people who know them, evaluating their suitability and forwarding their names to the Vatican.
A good candidate, he said, must be an authentic witness of the Risen Lord and not simply someone with an impressive curriculum vitae.
Look for “bishop-pastors and not princes and functionaries. Please!” the Pope told them.
“You need to cast your nets wide,” the Pope said, and not always rely on recommendations from the same people. “If we always go fishing in an aquarium, we will never find them!”

As representatives of the Pope in a certain country, he said, a nuncio must take the Pope’s message and share it locally, helping bishops, priests and laypeople live it out in their own cultures.
Today, he said, the message is mercy and concrete signs of closeness to people who are often confused, in pain and yearning for a word of hope.
In daily contact with a nation’s bishops, he said, “you touch with your hands the flesh of the Church, the splendour of love that makes it glorious, but also the wounds and injuries that make it beg for forgiveness.”
A nuncio is sent to a local church “to support and not only to correct,” so he must listen before making decisions and reach out to promote understanding and reconciliation, the Pope said.
“See, analyse and report are essential verbs, but not sufficient in the life of a nuncio,” he said. “He also must encounter, listen, dialogue, share, propose and work together” to ensure people know that he truly loves the local population and the local church to which he has been sent.
“It is not enough to point a finger or attack those who do not think the way we do,” the Pope told the nuncios. “That is a tactical method of modern political and cultural wars, but cannot be the Church’s method.”
Around the world there are signs of growing fear, leading people to build walls and dig trenches, he said. “We can understand the reasons for the fear, but we can never embrace it.”
Pope Francis urged the nuncios to go out, “open doors, build bridges, weave ties, maintain friendships, promote unity.”
Obviously, he said, there is evil in the world and there are situations of injustice and persecution — especially the persecution of Christians in the Middle East — that must be denounced.
Protecting the freedom of the Church in the face of any power that tries to silence it is an enormous task today, the Pope said. While diplomatic agreements are important instruments for guaranteeing the Church is free to carry out its activities, the Church will be truly free only if it proclaims the Gospel and its members are willing to be “a true sign of contradiction” in societies that deny Gospel truths.
At the same time, he said, convinced that God is truth, beauty, love and mercy, and confident that he will be victorious in the end, Christians must persistently and patiently practice dialogue and educate consciences.
“You are not asked to be gullible lambs,” he said, but “I encourage you not to indulge yourselves in a climate of being under siege, giving in to the temptation of feeling sorry for yourself or playing the victim of those who criticize, goad or even belittle us.”
Mercy is the true power of the Church, Pope Francis told the nuncios. “We don’t have the right to deprive the world — including in the forum of bilateral and multilateral diplomatic activity — of this richness, which no one else can give. This knowledge must push us to dialogue with everyone and, in many cases, to be a prophetic voice for those marginalized because of their faith, ethnicity or economic, social and cultural condition.”
Foreign diplomats are used to writing in code, but Pope Francis told the nuncios that “mercy must be the cipher of the diplomatic mission of a nuncio.”
Even in the world of political power, he said, inside every human person there is a space where the voice of God can reach and mercy is what can tap into it.
“Dialogue with clarity and do not be afraid that mercy might confuse or diminish the beauty and strength of truth,” he said. “The completeness of truth is found only in mercy.”

A political split awaits a pope who is difficult to pigeonhole 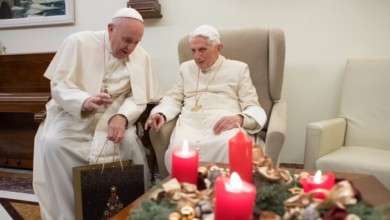