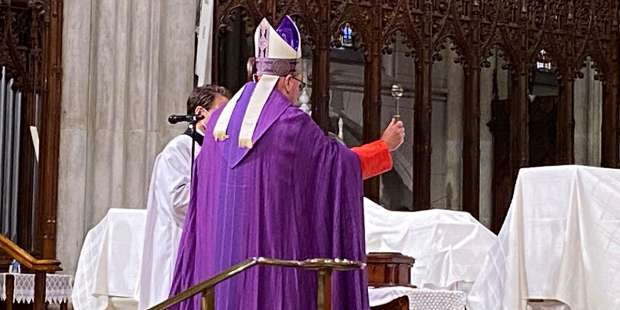 St. Patrick’s Cathedral service held for 250 immigrants who were then flown home.

The cremated remains of 250 Mexican immigrants who died of COVID-19 in New York City were blessed at St. Patrick’s Cathedral before being flown home to their final resting place.Cardinal Timothy Dolan of New York said he was gratified to be able to give the remains a final blessing before they were reunited with loved ones back home.

“These families suffered because they weren’t able to be with their loved ones at the time of death,” Cardinal Dolan said after the July 11 ceremony. “And now to know that they’ve had God’s blessing here at the cathedral and that they’re going to be accompanied to their home in Mexico, with the hope of their eternal home in heaven and that we’ve sought the intercession of their madre, Our Lady of Guadalupe, it means a lot to me.”

“Today, we lovingly take them to Mexico, their earthly home, and we pray so that they will live forever in their true celestial home,” Dolan said during the Spanish-language service.

Many of the immigrants did work in New York that put them at higher risk for contracting COVID-19, such as construction, food service and cleaning in homes and healthcare settings.

“When the pandemic was at its peak, they never ceased working,” Jorge Islas Lopez, consul general of Mexico in New York, said after the service.

Some of the deceased were children, however.

About 200 persons attended the Saturday morning service, some crying, many holding photos of their loved ones. A mariachi band played the song “Mexico Lindo y Querido,” with lyrics that were especially a propos: “Lovely, beloved Mexico, if I die far from you, may they say that I’m asleep and may they bring me back here.”

Islas told the Mexican newspaper El Universal that more than 1,500 Mexican immigrants have died of the virus in the United States, over half of whom were in the New York metropolitan area.

“Many of them died alone because they did not have family here,” Islas told the media after the ceremony. “That’s why it’s important that they return with the utmost dignity and decorum, an utmost respect that the faithful should be given.”

The consulate, who helped arrange for the service, put the cremains on a Mexican government jet leaving that evening from LaGuardia Airport. A military honor guard greeted them upon arrival at the international airport in Mexico City. The individual containers were then sent to respective families around the country.