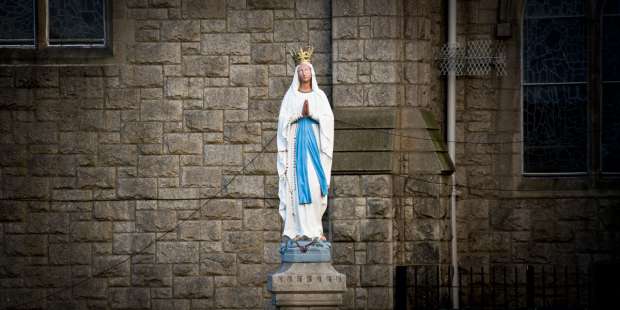 Our Lady doesn’t mess around, and that Saturday proved it

Home » Articles » Our Lady doesn’t mess around, and that Saturday proved it

My own offering was more humble than it should have been, but she found a way

I woke up at 5 a.m. on Saturday besieged with the following thoughts:

“You should never be in charge.”

“You have no time for this.”

“If you really cared about the women, you would have planned better.”

I was in charge of an event for the women of my parish and I had uncharacteristically done little to prepare. Although I had organized the Mass, the speaker, and some generous souls to bring food, I had not planned any niceties, like flowers, decorations for the hall and parting gifts.

In three hours, 50 women were arriving to church and I was not ready for them.

I know everyone says they’re busy, but this past month was hellish. I’ve flown  across country twice to attend to family business. All six of my children had the flu and three of them developed either croup, strep, or ear infections. My husband and right hand man also got sick. I have a professional project due April 1, which occupies a large piece of real estate in my brain. I teach an art class, homeschool five children, and I just finished running a Bible study at my parish.

In light of my primary commitments, I had no business taking on this event; I didn’t have time to give to it.

Coincidentally, I recently began Father Michael Gaitley’s, book 33 Days to Morning Glory, A Do It Yourself Retreat in Preparation for a Marian Consecration. A few days into the retreat (and before the event), Father Gaitley explains part of Louis de Montfort’s formula of consecration, which “says that we should give Mary everything, including our merits and our virtues, and our good works, present, past, and future.”

This is a radical concept because “we lose the unconditional right to distribute the value of our prayers and good actions to others.” Mother Mary takes all the graces we merit and uses them the way she thinks best, not the other way around. Father Gaitley says we have to trust this process because Mary will perfect the good things we offer and outdo us in her generosity.

I was skeptical about the whole give Mary everything approach, but just a few days after I made this pledge anyway, she proved to me she is supreme in her goodness.

But back to Saturday morning…

I dragged myself out of bed, threw on a suit, and walked downstairs to leave.

Everything will be fine, I thought, trying to quell my rising panic. Mother Mary will help me.

I was throwing stuff into my purse when my eyes randomly fell on some potted plants on my kitchen table.

Hey, I thought, I can use those for centerpieces on the tables.

My eyes darted around and I noticed a handful of other items, including an icon and a statue of Mary, that I could also use for decorations.

These things will make the place pretty!

I grabbed a basket and raced around my house, loading stuff up.

I decided to leave right away so I would have time to stop at the store.

Mother Mary, I want votive candles for the table. Candlelight makes everything pretty.

I drove to Wal-Mart at 6:30 am, dashed inside and immediately found pretty blue and white polka dotted paper plates and napkins (in honor of Our Lady). Then, I raced to the candle aisle, but the kind I needed were sold out.

What should I do? I said to Mary.

I bent down to double check the shelf, and discovered five boxes of just the candles I was looking for, hidden all the way at the back, waiting for me.

I bought them and hightailed it to the church.

When I arrived, my friend was waiting with extra table cloths to help me set up. We decorated the entire place in less than 30 minutes, made it to Mass on time, and the event was a rousing success.

Every woman I spoke to said the morning was just what she needed. Several others commented on how beautiful the place looked. One of my friends said, “Only Colleen would have lighted candles all over the place.”

I laughed and confessed to her about the vicious thoughts, my lack of preparation and the Consecration.

“I can’t take the credit,” I said, “because I didn’t do this. Mary took my pitiful offerings and magnified them into something beautiful. She took the hour I had to give and transformed my small deeds into something great. She provided for these women much better than I ever could have on my own.”

Our Lady doesn’t mess around.