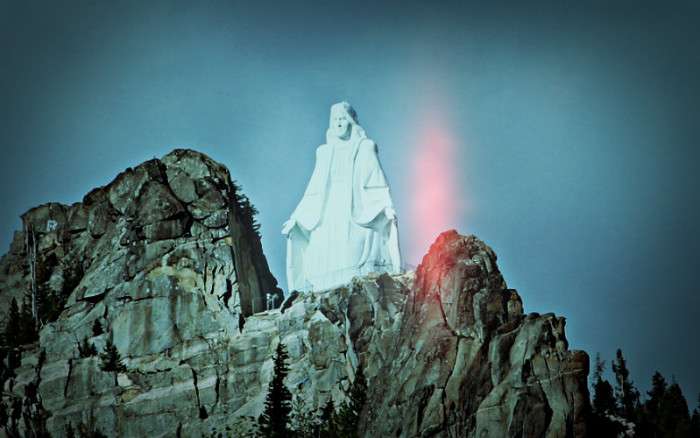 “Our Lady of the Rockies”: The Miraculous Story Behind Montana’s 90-ft Statue of Mary

One of the most picturesque views in Montana comes into focus when rounding the bend on eastbound Interstate 90, about 6 miles from the historic city of Butte. On the towering East Ridge overlooking the city sits the third-tallest statue in America: a 90-foot-tall homage to the Blessed Virgin Mary, brilliantly white and perched 3500 feet above the valley floor, known as Our Lady of the Rockies.

Her story began in 1979 with Butte resident Bob O’Bill, whose wife was nearing death from cancer. O’Bill, who for many years worked as electrician in one of Butte’s surface mines, prayed that his wife be healed, and promised to build a 5-foot statue of Mary in his yard if God answered.

When his wife made a full recovery, O’Bill and his friends set about to fulfill the promise, but the plan soon developed from a small statue in a yard to a massive icon on a mountain.

There’s another dimension to this story: During all of this, Butte – once a mining boomtown, the world’s top copper producer, and the largest city between St. Louis and San Francisco – was suffering through its worst economic recession ever. Mining companies had left not long before, jobs were scarce, and morale in the most Irish city in America was at an all-time low.

And yet, through backbreaking volunteer labor, unparalleled generosity, and more than a little dose of the miraculous, the statue of Our Lady was finished in 1985, just over 30 years ago. The details of this amazing story parallel perfectly with lessons we hear over and over again in the life of Christ and in the life of the Church:

The builders, like the Apostles, were just regular guys

Bob O’Bill and his mining buddies, by the world’s standards, were nobody special. Leroy Lee, for example, the man who designed and welded the statue’s three pieces, brought no design experience and a grade school education to the table. But since when does God care about the world’s standards?

It was fishermen and tax collectors, not society’s elite, who became Jesus’ disciples. And the builders, like the Apostles, more than made up for it in their faith and their desire to follow the will of the King.

What that community lacked in economic wealth, it made up for in generosity. Virtually every piece of the project was donated: the land on top of the East Ridge, the heavy machinery needed to cut a road up the mountain itself, the cement base for the statue, and (most of all) the labor.

As more men lost their jobs due to the recession, they gladly lent their time to pushing the project forward, while the volunteers’ families held benefit dinners and bake sales to make up for any intermediate costs. Even the placing of the three-piece, 60-ton statue atop the mountain, requiring a National Guard unit and Sikorsky S-64 Skycrane, was given to them.

It was in their lowliness that they triumphed

Throughout the centuries, in the life of nearly every saint and the story of almost every culture, the sense of the divine is highest when the individual or group is at their lowest point. The moment when all seems lost, when the world has dealt us its death blow, God’s grace is able to flow through in its freest form.

Butte, an aging titan of a fallen era, had been brought to its knees. Families struggled to put food on the table. There seemed to be no way out. And yet, at that very moment and in those very circumstances, a community was able to hope for something. Only then could this monument have been built, for surely in better times such a project would have been thought unnecessary or frivolous.

“It only could’ve been done in Butte,” O’Bill recalled.

The best part of the story. Leaving aside the sudden recovery and healing of O’Bill’s wife (seen in the video below), the sheer number of pieces that fell into place are astounding.

These, of course, are only a few examples.

“Everything we asked of Mary up there, we got,” said Jim Keane, one of the builders.

So if you’re looking for a pilgrimage that doesn’t cost an arm and a leg, make a drive to Butte this summer. Stop at Pork Chop Johns for lunch, then catch the shuttle from the Butte Plaza Mall up to the top. Always watching over us with her maternal gaze, Mary really is a sight to behold.

Here are a few more pictures of the statue and the area around it:

Our Lady of the Rockies, pray for us!