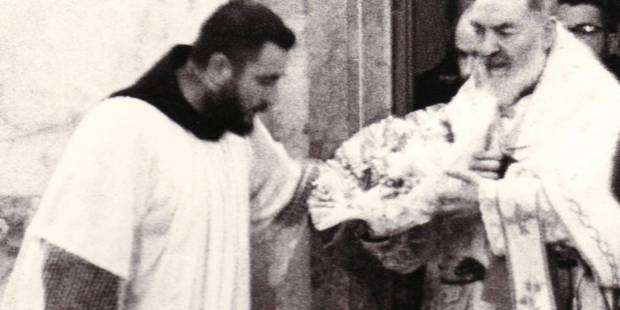 Catholic Home » Articles » Padre Pio bore the stigmata, but one secret wound was more painful than the others

The saint only revealed it to one person — Karol Wojtyla, the future Pope John Paul II

Padre Pio is one of the few saints who has suffered the wounds of Christ’s Passion in his body, the stigmata. In addition to the wounds of the nails and the spear, St. Pio was also given the laceration that Our Lord endured on his shoulder, a wound caused by carrying the cross, which we know about because Jesus revealed it to St. Bernard.

The wound that Padre Pio had was discovered by one of his friends and spiritual sons, Brother Modestino of Pietralcina.

This friar was from Pio’s native land and helped him with domestic services. The future saint told him one day that changing his undershirt was one of the most painful things he had to endure.

Brother Modestino didn’t understand why this would be, and presumed that Pio was referring to the pain that came from pulling the cloth away from the wound in his side.

He realized the truth after Padre Pio had died, when he was organizing the vestments of his spiritual father.

Modestino had been given the task of collecting all of Padre Pio’s belongings and sealing them. On the priest’s undershirt, he found a large stain on the right shoulder, close to the shoulder blade. The stain was some four inches across (somewhat similar to the stain on the Shroud of Turin). He realized that for Padre Pio to take off his shirt, peeling the cloth from this open wound would have caused tremendous pain.

“I immediately informed the father superior of what I’d found,” Brother Modestino recalled, and the superior asked him to make a brief report. He added: “Father Pellegrino Funicelli, who had also assisted Padre Pio for many years, told me that many times in assisting Father in changing the woolen undershirt that he used, he would always note — sometimes on the right shoulder, sometimes on the left — a circular hematoma.”

Padre Pio did not speak about this wound except to the future John Paul II. If the holy brother revealed it only to him, there must have been a reason.

Historian Francesco Castello writes of an encounter in San Giovanni Rotondo, in April of 1948, between Father Wojtyla and Padre Pio. It was then that Pio told the future pope about his “most painful wound.”

Brother Modestino later reported that Padre Pio, after his death, gave him a special understanding of this wound.

“One night, before I went to sleep, I made a petition to him in prayer. ‘Dear Father, if you really had that wound, give me a sign.’ And then I went to sleep. But at 1:05 in the morning, a sharp and sudden pain in my shoulder awakened me from a tranquil sleep. It was as if someone had taken a knife and stripped the flesh from my shoulder blade. If the pain would have continued a few minutes more, I think I would have died. In the midst of this, I heard a voice that said, ‘That is how I have suffered.’ An intense perfume surrounded me and filled my cell. I felt my heart overflowing with love for God. I felt a strange sensation: to have this unbearable pain taken away from me seemed even more difficult than enduring it. The body wanted to reject it but the soul, inexplicably, desired it. It was extremely painful and sweet at the same time. Finally I had understood!”