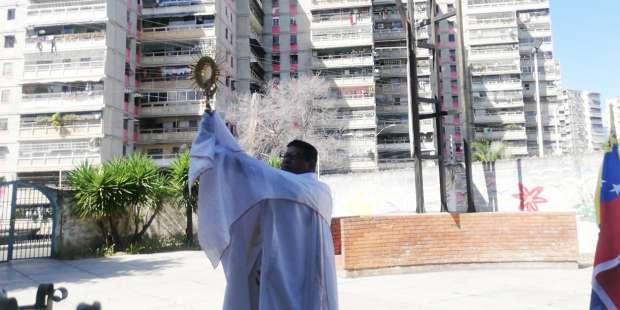 One priest is cleverly offering services in front of his church, welcoming all those around him to pray from their homes.

One parish priest has taken a revolutionary approach to the coronavirus quarantine in his diocese. He is choosing to treat this time of confinement as a spiritual retreat, both for himself and for his parish flock.

“Here, I have been doing special adoration to the Lord, which will last as long as God wills it. I will go out every morning to expose the Blessed Sacrament in the sight of my neighbors, so that they too may feel the closeness of Jesus who does not abandon us. We’re in a moment to strengthen the families or domestic churches in the midst of this pandemic that Venezuela and the world is suffering.”

These are the words of Fr. Teodoro Sosa, in an interview with Aleteia, describing the “spiritual retreat” that he has been making since March 19, at the parish of the Sacred Heart of Jesus in Guarenas, Venezuela. He’s leading the retreat in the sight of his parishioners, who follow him daily from the balconies of surrounding buildings.

Very early in the morning, Fr. Teodoro places the Blessed Sacrament on an altar outside the church. There, he cries out to God for the spiritual strength of those who listen to him through the speakers. He asks God to help them so they may face without fear, with faith and hope, the pandemic that is plaguing the world, including his homeland. As of April 1, the official figures revealed that 143 Venezuelans were already infected by Covid-19, with 3 deaths.

The Church does what it knows best how to do: pray before God, and bring faith, hope, and charity to the population. Fr. Teodoro began these activities on March 19, the feast of Saint Joseph, the moment chosen by the Episcopal Conference to hold a day of prayer for Venezuela.

That day, Fr. Teodoro presided over a Mass in the morning, but prayers and devotions were continued until 10 p.m. It was the beginning of an itinerary of prayer that many surprised neighbors began to follow from the balconies.

“It is a matter of motivating people to make them willing to comply with the rule of staying at home, but as a family,” said Fr. Teodoro to Aleteia. “In their homes they also have the possibility of meeting with God in prayer and in the reading of His Word, to successfully face the pandemic and to strengthen family ties.”

On Friday, March 20, the second day of the “spiritual retreat” began, again getting the attention of the neighbors. This time he placed in view the parish’s life-sized image of the Nazarene (Jesus carrying His cross), which since then has been a part of his “permanent prayer” in this pastoral initiative.

Some neighbors and passersby, especially in the morning hours—when they go out to buy food—stop in front of the church to accompany him briefly. The priest greets them and blesses them, then they go on their way.

It’s a simple retreat, but one of intense prayer. Here’s the plan he follows each day:

In his petitions, he prays especially for the elderly; children; people at risk, such as those who have chronic illness (not only patients with COVID-19); and doctors and other health personnel who are fighting the deadly pandemic. He also asks for wisdom for governments in dealing with this difficult situation, and prays for the priests who have died as a result of COVID-19.

On the second day of his “retreat,” Fr. Teodoro let someone live-stream on Facebook his prayers and messages and share the video recording. He has faith that the pandemic can be defeated, as has happened with other plagues that have attacked humanity throughout history. He wants to continue having the company of parishioners from their homes, however, “because every neighbor is part of a domestic church in which Christ reigns,” he says.

Fr. Teodoro Sosa’s public retreat is one of many efforts priests are making to connect with their parishioners during these days of empty churches in Venezuela and the world. Seeing this priest inspires people to come down from the balconies of the surrounding buildings and join him, or tell him that he’s not alone. His simple and very wise words send an important message: “Let’s be patient. We are going to get through this and meet again as God’s children, brothers and sisters, and citizens.”